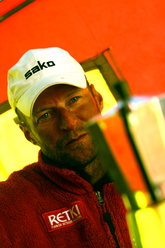 On 26/07/2009 Veikka Gustafson reached the summit of Gasherbrum I together with Japanese climber Kazuya Hiraide and four Bulgarians. For the mountaineer from Finland this seals his bid to climb all fourteen 8000m peaks without supplementary oxygen.

Yesterday, 8.00 am in the Karakorum: Veikka Gustafson from Finland took the last steps to reach the summit of Gasherbrum I, the final summit missing from his list of 8000m giants. He was in the company of Kazuya Hiraide from Japan and stated "The world is great! - the weather is perfect, there is no wind at the top. You can see all the Karakoram below." This grand finale couldn't have been better, as if to say that happiness exists on the world's giants, too.

A few hours later the summit was also reached by the Bulgarian mountaineers Nikolay Petkov, Doychin Boyanov, Boyan Petrov and Nikolay Valkov, with whom Gustafson and Hiraide had joined forces. At present all climbers are involved in the descent to Base Camp where Gustafson will certainly celebrate this fantastic success in style.

Born in 1968, Gustafson began climbing aged 16. His Himalayan career took off in 1993 with a commercial expedition to Everest, which he climbed with the use of supplementary oxygen. Evidently not entirely satisfied, he reattempted the highest mountain in the world without O2 but was forced back at 8600m. Success came a year later. In some respects reaching the summit after a number of failed attempts became the Leitmotiv for Gustafson, who managed to turn back and wait for better moments on Dhaulagiri, Annapurna, Broad Peak, Kanchenjunga and also on Gasherbrum I, from which he retreated 50m shy of the summit last year. Yesterday everything was perfect, as if to say, there is time for everything, for the long wait and for the summit joy... 16 years of great climbs, congratulations!