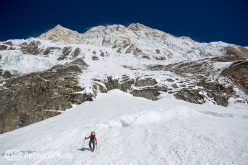 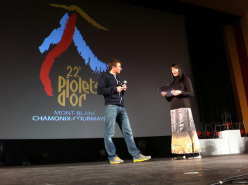 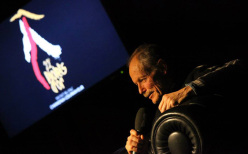 The presentation by Erri De Luca of Ueli Steck's ascent of the South Face of Annapurna, 8091m, in October 2013.

Ueli Steck did not want to climb the South Face of Annapurna alone. He had acclimatised by ascending the first sections of the face with his climbing partner, who decided to renounce right at the last minute.
And so Ueli Steck set off alone, intent on exploring that unknown line up the immense face.
He, Swiss, had held Erhard Loretan as his ideal alpinist, fast and an innovator. From him he had learnt that by climbing at night in the Himalaya the body stays warm and more stable terrain can be breached.
So Ueli Steck waited for night to fall, for the wind to stop blowing. He climbed the upper half of the face, the harder section, with his headlamp. He climbed upwards, concentrated and locked in his bubble of light, like an air bubble within a liquid mass.
He reached the summit and only noticed he was there because, in that darkness, there was nothing left to climb.
Five minutes later he began the descent via the same route.
He followed the same steps that, during the ascent, were his seam above the void. During the descent he unstitched them.
Dawn broke and he was already more than halfway down the face, on safer terrain.
In 28 hours Ueli Steck ascended and descended the South Face of Annapurna alone.
In alpinism we are used to the fact that yesterday's impossible becomes today's possible. The unthinkable carried out by Ueli Steck up the South Face of Annapurna will remain insuperabile for a long time to come.