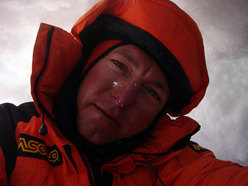 Tomaz Humar on the South Face of Annapurna in 2007, at the second bivy before the descent to Base Camp
Photo by Thomas Humar 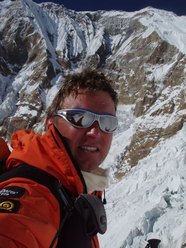 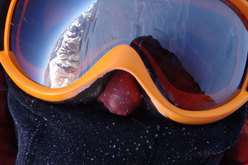 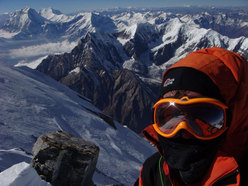 This morning at 05.25 European time the dead body of Slovenian alpinist Tomasz Humar was recovered from 5600m on the South Face of Langtang Lirung (7230m, Nepal) by a helicopter with a rescue team comprised of Swissmen Robert Andenmatten and Simon Anthmatten (Air Zermatt) and the Italians Oskar Piazza and Angelo Giovanetti. Tomasz Humar, 40, was considered to be one of the strongest alpinists in the world. He leaves behind his wife and two children.

All the hopes have now vanished: early this morning the lifeless body of Tomaz Humar was recovered from an altitude of 5600m on the south face of Langtang Lirung. The Slovenian alpinist, who in 1999 stunned the world with his solo of the virgin and terrible south face of Dhaulagiri (8167m), died while attempting another one of his many adventurous solo climbs. The 1999 ascent was an incredible undertaking, one destined to leave an indelible mark in the history of alpinism. It was not by chance therefore that at the start of the new millennium Humar became a reference point for cutting-edge Himalayan mountaineering, and even Reinhold Messner recognised this role and investiture. Apart from this apex climb, one mustn't forget that Humar had also forged a new route on Ama Damblam together with Vanja Furlan, awarded with the Piolet d'Or 1996, while a decade later he carried out a solo ascent of the south face of Annapurna. But his curriculum was widespread and varied, and in the year of his great Dhalagiri climb he soloed, in a 15 day push, the 1300m high Reticent Wall on El Capitan in Yosemite valley. And then of course there is the tragic and difficult ascent of Nuptse in 1997, during which his partner and friend Janez Jeglic disappeared from the summit, probably blown away by the wind. The list could be much longer still. It could for example include the 2005 Pakistani military helicopter rescue during his attempt to solo Nanga Parbat, for which he received certain criticism and polemics from the mountaineering world. What is certain is that Tomaz Humar was a man and mountaineering who always gave it everything he had, who always attempted to do and give the best. Humar was a strong man, one who firmly believed in what he did. When in 2007 we asked him to reply to polemics regarding his solo on Annapurna, which for many was a repeat and not a new route, he simply didn't want to enter the discussion and told us that that he carried out that climb "for his soul."


Bad news travels, as always, fast. The one of Tomaz Humar struck hard: he was injured and blocked at circa 6000m somewhere on Langtang Lirung, an ill-tempered beast of a mountain 7230m high in the Langtang range close to the Tibetan border. The strong Slovenian alpinist, climbing alone on the south face, had launched an SOS on 9 November giving, it seems, few details about his whereabouts and rendering the rescue mission even more problematic. Indeed, the first rescue attempts carried out by Asian Trekking agency Sherpa who reached Humar's presumed altitude proved unsuccessful. After the first call nothing else was heard from the Slovenian alpinist. His friends in Slovenia, with the immediate help of Air Zermatt which had already rescued Humar on Nanga Parbat, immediately organised a team which reached Nepal yesterday and organised a first helicopter rescue attempt, weather conditions permitting.

The situation was dramatic to say the least, but yesterday morning a thought sprung to mind: our Italian friends Oskar Piazza and Angelo Giovanetti were exactly in Langtang to climb a nearby summit. They had been there for a couple of weeks and considering returning home. Piazza and Giovanetti are two expert and experienced Himalayan mountaineers and, apart from being Mountain Guides, Piazza is also helicopter rescue instructor and one of the directors of the Italian Mountain rescue squad. Even more important though is the fact that they were both perfectly acclimatised to operate at altitude. We informed them about the situation and the two mountaineers immediately got ready to work with the Swiss rescue team. Via our friends at Planetmountain we contacted Menno Boermans of Air Zermatt and informed them about the possibility of Piazza and Giovanetti joining the team and this was greeted positively. During yesterday's last call, Piazza informed us that early this morning, weather conditions permitting, he and Giovanetti would be on board the helicopter for a reccie and a possible rescue attempt.

Uncertainty, as always in the Himalaya, is an obligatory element: weather, difficulties and objective danger are important variables. Added to these was the uncertainty of the exact position of Humar on the mountain, a detail not to be underestimated. Nevertheless if there was some hope for a successful outcome, this lay in expert and able hands. Just like for the unfortunate Spaniard Oscar Perez who died on Latok II in August, the rescue operation was organised by alpinists in Europe and alpinists already in loco. We believe that the latter constituted perhaps the only element which, apart from the obvious alpine and human solidarity, could give a sense - and some probably of success - to such a difficult attempt.

This morning at 05.25 CET we received a call from Oskar Piazza. They had reached Humar after just a few minutes flight and had recovered his body, unfortunately lifeless. During a second phone call Oskar provided some information about the operation. "We took off together with Swissmen Robert Andenmatten and Simon Anthmatten at circa 7.00 am. After roughly fifteen minutes we located Humar on the South Face. With a longline we lowered Simon - the lightest of us, afactor essential when working at altitude - who reached Humar. Unfortunately he could do nothing else but ascertain the death, probably due to exhaustion and the cold. Simon harnessed the body and we recuperated Tomaz and flew him to the village airport at Kyanjingompa. The helicopter then returned for Simon. Of the various people waiting in the airport there was also the doctor and the entourage who often follow Tomaz on his expeditions. It was a truly sad moment and we did our best to comfort them, even if words count for little. The police then authorised for Humar's body to be transported to Kathmandu."*

The nth high altitude accident comes to end in the most tragic of ways and it is one of many who in 2009 have marked the international mountaineering world. Michele Fait, Serguei Samoilov, Cristina Castagna, Roby Piantoni, Oscar Perez, Franc Oderlap, Wolfgang Kolblinger, Go Mi Sun, Denny Verhoeve, Giuseppe Antonelli, to name just a few of those who lost their lives from spring to present day in the mountains in the Himalaya and the Karakorum.

As we have repeated on many occasions, the number of mortal accidents compared to the number of climbers who attempt these high altitude climbs certainly isn't abnormal. And those who brave the Himalaya know full well about the risks connected to this type of mountaineering, But the crude statistics do not explain in any way the passion, nostalgia, euphoria, solitude, fear, joy, effort, pain and cold. They do nothing to explain those feelings and emotions which mix within those who chase their breath on some mountain slopes at six, seven, eight-thousand meters.

Paolo Rumiz, with whom yesterday we discussed Humar's situation without yet knowing the tragic outcome, asked what could motivate someone who had already passed his youthful years to continue to put himself to the test. These are years in which the personal and global challenge is at its height, one which forms both the body and spirit.

What magnetic fields continue to push alpinists from within, even the most expert and, in some ways, no longer the youngest - Humar was 40 years old? To push them to the point of risking their lives on routes and mountains which at times only few experts know about - Langtang Lirung was one of these? The question might receive a different reply from every mountaineer one asks, but at the base of it all one could smell the essence of the irremissible sentiment for all human beings: freedom.

Freedom to think and act, to choose how to live. And finally die. Even if no mountaineer I've ever met has ever seriously thought he could be next, so one cannot really talk about "choice" but, at the most, eventuality. No one would leave behind wife, children and parents if they really thought they might not return. Those who set off for the mountains, however difficult these may be, set off not for war but for peace, for their personal, special peace. Besides, the battle against the Alps should have finished a long time ago.

The freedom of an alpinst is in some respects always individual and selfish, it includes perhaps a climbing partner but certainly not the family. Unless, as often happens, when it is too late. It's a totalising freedom which does not foresee - nor does it allow for - many other spheres which are not related to climbing mountains. Please don't misunderstand, I'm not defending all-out caution or the family. But my age, personal experience in the field and the many words exchanged with alpinists of all calibre throughout all there years - and certainly a modest mountaineering talent which has developed my critical view more than my ability – lead me to believe that the apparent liberty a climb gives too often alters horizons which are far wider, sentiments which are a lot more profound and knowledge far more noble than anyone might imagine.


* Correction by Manuel Lugli on 17/11/2009: "As a partial rectification for the attempted rescue of Tomaz Humar last Saturday on behalf of the Air Zermatt team in collaboration with the Nepalese Authority, I would like to clarify that Oskar Piazza and Angelo Giovanetti, as Menno Boermans of Air Zermatt rightly pointed out, did not board the helicopter with the other crew - pilot Sabin Basnyat, co-pilot  Robert Andenmatten, team leader Bruno Jelk and rescuer Simon Anthamatten - but remained on hold at the airport at Kyanjingompa, ready, given their good acclimatisation, to take part in a possible rescue operation should it have been necessary after the reccie flight. Unfortunately the quality of the telephone communication (which took place in two moments, at 5.23 at 10.20 on Saturday morning) and the detailed description I received from Oskar Piazza after the recovery of the unfortunate Slovenian alpinist, led me to make an error, as I understood that the Italian alpinists had taken part directly in the operation. Unfortunately in these situations haste and almost always poor communications can provoke misunderstandings and errors and this is what happened in this case.I would like to apologise to Air Zermatt, Oskar Piazza and Angelo Giovanetti and to all the readers."