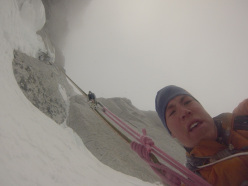 Tom Ballard during his solo ascent of the Allain - Leininger route up the North Face of the Petit Dru (3,733m) in the Mont Blanc massif
Photo by Tom Ballard 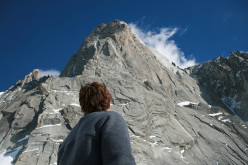 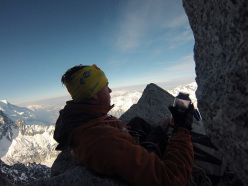 Tom Ballard taking a rest at the niche. After 2 hours and 30 minutes of climbing up the Allain - Leininger route on the Petit Dru. Still a long way to go...
Photo by Tom Ballard 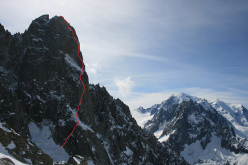 The line of the route climbed by Pierre Allain and Raymond Leininger in 1935.
Photo by Tom Ballard

British alpinist Tom Ballard has climbed the Allain - Leininger route up the North Face of the Petit Dru (3,733m) in the Mont Blanc massif. This is his fifth climb of his Starlight and Storm project that aims to climb the six great North Faces of the Alps in winter, alone and in just one season. Now the only mountain still to be climbed is the Eiger.

Just six days after his rapid solo ascent of the Colton - Macintyre on Grandes Jorasses, Tom Ballard has now soloed the original route up the North Face of the Petit Dru, first climbed by the Frenchmen Pierre Allain and Raymond Leininger in 1935. Ballard had never climbed the Petit Dru before and his 8-hour solo came about after a "false start" last Thursday, after which the 26-year-old feared he’d missed not only the weather window, but also his window of opportunity to complete his ambitious goal: to climb the six great North Faces of the Alps in winter, alone and in just one season.

Now the only mountain missing from the "Starlight and Storm project" is the North Face of the Eiger but time certainly isn't on Ballard’s side; winter officially ends in five days time, on Friday 20 March. But this is what our calendar says, certainly not what the mountain suggests and dictates, which is far more important. It goes without saying that we all wish Ballard the best of luck and, above all, wise and safe climbing.

After my success with the Grand Jorasses, I was naturally very keen to try to fit together the next piece of the puzzle. On Wednesday with a huge bulging rucksack my friend Ina and I rode the lift to Grand Montets and skied down 'Pas de Cherve'. The snow being firm and bumpy higher up, lower down thawing towards slush! A short skin led to the Dru Rognon, with the impressive Dru towering above.

We dug out a place for the tent and then relaxed in the sun. A most beautiful sunset. Around 7.30 in the evening the wind picked up. The tent was really buffeted during the night. The next morning the wind was still strong, you could hear it roaring on the North Face. I went up for a reccie, finding the start of the climb and the foot of the Dru Couloir which was to be my descent. I then crawled back into my sleeping bag, slept for a few hours, then I decided to head down.

As far as I knew the winds would slacken, but not die. I am not so keen on the idea of climbing bare-handed on rock with a cold north wind. So Ina and I packed up, stashing my tent, ropes and gear for the next time. We skied down the easy slopes which led to an abrupt drop. Here we were able to find a passage down to the crumbling medial moraine, descending this in the sun, with huge tottering icefalls looking likely to fall down any minute. And with rocks detaching themselves from the moraine at ever increasing intervals, and whizzing by alarmingly close. Certainly a death trap. Give me a cold North Face every time!

We then met with the hordes of skiers on the Mer de Glace. Where do they all come from? Can there really be so many skiers and guides in the world? I was in a very bad mood, I really dislike being in a crowd. Plus, I felt as if I should have stayed up there… this was confirmed later when I saw the weather forecast. Friday was to be the best day. Damn!

That night was spent in the Grand Montets car park. The next day was lovely and sunny. I managed to get all my kit dry again. Some time after three in the afternoon I rode the cable car again, this time I was alone. I skied down the quite steep 'Couloir Rectiligne', dodging the crevasses at the bottom, this enabled me to get in much higher. Only 30 minutes of skinning to the Dru Rognon. The clouds gradually rolled in, as promised. But, surprisingly, later the skies cleared. A sky full of stars. It felt much colder.

Five thirty and I'm awoken by my alarm. A quick peek out of the tent door with sleepy eyes reveals clear skies. Good. Stove on. Gear packed. Some biscuits. Begin the short approach. 7am and I begin the climb. Two hundred meters of mixed climbing is good for warming up! Then rock climbing, still wearing crampons, but with gloved hands. A horrible chimney. I really hate chimneys. Then the "fissure Lambert". At first I try to climb a steep crack, but soon I abandon this to climb up the corner. M6, but it feels harder carrying two ropes on my back! The angle gradually eases back and suddenly I’m at the Niche. After two and a half hours. Much quicker than I could hope for. Time for grog and grub!

I now waste some time by going up to the ridge overlooking the impressive West Face. Abseil back down and find the correct line. I am certainly not the first, and probably won't be the last, to make that mistake. When you reach the large unstable blocks with bits of old rope, don't go straight up the appealing corner above. Instead trust those unsteady looking blocks on the left...

The temperature remains cold. I can see my breath. I begin to climb barehanded, without the crampons. Trailing the rope. Running out the full length of 70 meters, then rappelling down to retrieve my sac. Time drags on. The clouds are rolling ever nearer. But the summit seems as far away as ever! After another squeeze chimney, much cursing and thrutching, I’m negotiating the last blocks that lead to the summit. It has started snowing. I can't see anything. Only grey. But I don't care.

I 'm on the top after eight hours. I eat some chocolate and have a little drink. Unfortunately the liquid is frozen. I traverse to the 'Breche'. Now both ropes come into play as I commence the abseil decent. Three abs lower and I encounter Jack and Nick with huge grins on their faces. It’s really snowing now. I continue abseiling down. Eventually I’m at the foot of the couloir. Coil up the frozen ropes. Trudge through the murk. Huge crevasses loom ahead, I’m too in the centre of the glacier.

The morning's tracks are obscured by the freshly fallen snow. There is a peculiar mauve light. The moon briefly shows itself. Then disappears again. Weary legs have bring me to my tent. A welcome sight. Shedding my gear I slip into the tent and light the stove for much needed drink. Later the clouds roll back and the skies clear once more. It has been a day of "Starlight and Storm"!


STARLIGHT AND STORM - THE ROUTES SO FAR