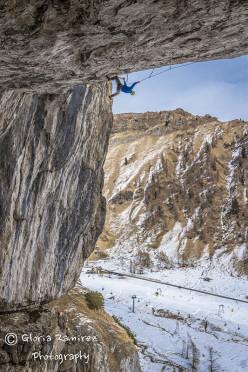 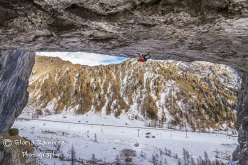 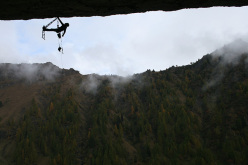 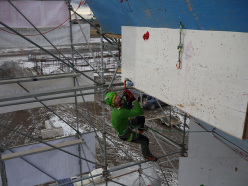 Tom Ballard during the Ice Climbing World Cup at Bozeman: so this is what it is like to climb on plastic holds!
Photo by archive Tom Ballard

Tom Ballard: climbing towards tomorrow's world in the Dolomites

British climber Tom Ballard discusses his recent climbs, which include the first ascent of Je Ne Sais Quoi D14+ in the Dolomites, Italy.

It all started in September 2012, after climbing Via Italia 61 on Piz Ciavazes with Val di Fassa local Igor Vian, he told me about a huge new 'roof', which might be a great place for hard drytooling! At this stage my father and I were traveling around living in our van. So next we were off to Switzerland…. I kept it in my mind. Now circumstances have changed, well not much, I’m still living in the van. Except it’s almost always parked in the ‘Camping’, and so when we go to the ‘roof’ my house comes with me!

Towards the end of summer 2014 I was sport climbing with Ivan's wife Patricia on a lovely wall just below the 'roof'. I walked up to have a look, and was blown away with the possibilities! During the monsoon that was November 2014, I set about bolting a huge arch feature in Val Udai. The route is very similar looking to Ironman at Eptingen, but a lot longer! What makes this route unusual is not its 'naturalness' (i.e. no drilled holds), but the abundance of footholds! The first movements after leaving Every Teardrop is a Waterfall (D9+ start) are the hardest, a long reach whilst keeping the 'pick' absolutely still! Even the minutest shift will see it popping out and you hitting the sky! Of course reaching the belay is not the end... it’s 38m back down to the floor, so you have to clip in and pull your rope through and then abseil off! A rope of 80m or a pair of 50m are needed!

In autumn 2015 I developed a small crag, Little England, very close to my 'basecamp' in Val di Fassa. After I had bolted and climbed all the routes, and become quite fit in the process, I wanted something bigger! So the very next day, with full aid climbing paraphernalia and a sack full of bolts, my father and I drove over Passo Fedaia and I started to attack the 'roof'.
I soon discovered that bolting a nearly horizontal roof was more strenuous than climbing it! I was taking rest days from the bolting!

The first route to be freed was Edge of Tomorrow, I think warranting D13. The start is exceptionally physical, then there is a good rest, then it’s back to brutality! After eating, drinking and resting a while I wanted to get another camera angle, so started up the route again, and by a huge surprise reached the anchor for the second time! Now some of the world’s strongest climbers were asking me where this amazing ‘roof’ was.

Trying to warm up on a D13 isn’t ideal so I continued development, adding a short line on the left hand side which became the warm up Real Steel, D9. I then extended this to reach Edge of Tomorrow, creating a not so hard, hard route, Fear Index D12.

There were a few days of terrible weather, raining a lot, and the roof resembled a shower. In fact it was raining more under the roof than outside! Despite terrible conditions I was able to free "Oblivion" which is D14 I believe. A bit harder than Low G Man at Bus del Quai for sure, this climbs Edge of Tomorrow and just after the good rest branches off right with strength sapping moves to eventually reach the lip…. Phew!

Since then the weather has been incredible, day after day of sunshine. That’s why I have been on the roof, a place which doesn’t get the sun! I got working on an extension to "Edge of Tomorrow", which can be started from Fear Index, upping the grade to D13+ (Let Them Eat Cake). After a OK rest where Edge of Tomorrow finishes, there are just three moves, but these three moves are big and hard, doing such acrobatics after a D13 ups the grade to D14/+. I called this route Tomorrow’s World and it’s probably the hardest bit of climbing I have done... that is, until my latest project! For after Let Them Eat Cake, I wanted to 'train' a bit more, so I fought my way up Oblivion as well!

I keep trying and falling off the project I have named (perhaps prematurely?) French Connection, which I believe will become one of the hardest routes in the world when completed! How’s that for an incentive? The first time I attempted it, I got really far and fell from the move to reach Oblivion; of course then it’s no walk in the park, finishing up a D14! Before I went to Bozeman to compete in the first round of the Ice Climbing World Cup, I developed a bad cold which turned into a horrible cough, so I wasn’t at my strongest during the competition. This didn’t matter much as I didn’t match both axes on the last hold of the first qualifying route! And despite topping the other, I didn’t make it through to the Semi’s.

So then it was time for some ice and mixed climbing up in the fabulous Hyalite Canyon. The history of this place is incredible, with iconic names such as Jeff Lowe and Alex Lowe to name but a few. Looking back, perhaps the Chrysler 500 we hired wasn’t exactly the ideal vehicle for snow. But we never (miraculously) got stuck! I was climbing with some of the other members of the British Team who stayed out after the comp along with me. We had a great time. I had never met any of the British team before, but we hit it off straight away. Most days we spent in the ‘Bingo Cave’, here I redpointed both Inglorious Basterds M12 and House of Flying Daggers M13, and onsighted Northwest Passage M10+, my cough had gone and I was beginning to feel human again! However, I was keen to get back to the sunny Dolomites and my projects….

Boxing Day I woke at noon, still jet-lagged, my father and I went to the roof, but I was still tired. Good training session though. One week into the new year and I was there again, this time Patti was taking pictures. I decided that I was a bit fed up falling off the same route, time after time, so, I tried one of the other projects. It takes the hard part of "Oblivion", then traverse rightwards, I was pumped out of my mind, but I kept going, the end never seemed to get any closer... eventually I clipped the belay! Je Ne Sais Quoi is a contender for D14+. I decided to try the harder project anyway, and surprisingly I got almost to the junction with Oblivion. I was still feeling strong, but there is a savage drop down move, the pick came out and before I could reset the other popped off too…..next time! Maybe!

Fig 4's or DTS*, Dry-Tooling Style? Well since I can't do figure 4s it has to be DTS! All the grades should be taken with a pinch of salt! Make that a bucket!