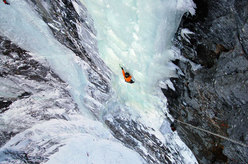 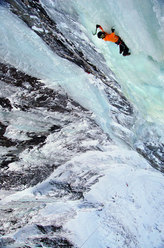 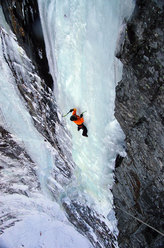 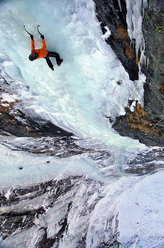 Rudolf Hauser: solo ascent of Supervisor and first integral ascent of Gamsstubenfall in the Gasteinertal

On 4 Janaury 2010 the Austrian climbers Rudolf Hauser, Alexander Holleis and Rupert Huber carried out the first integral ascen of Gamsstubenfall (800m, WI7), one of the last great icefalls in the Gasteinertal, Austria. On 12 January Hauser climbed the classic icefall Supervisor (270m, WI6) without a rope.

A few days ago we published the news about the first ascent of Centercourt (WI 7+) at the hands of Austrians Albert Leichtfried and Benedikt Purner in Valle di Gastein, Austria. Well, now we're returing to this valley because the day prior to this ascent, local climber Rudolf Hauser carried out the first integral ascent of Gamsstubenfall, an 800m route which had been courted and attempted over the years by a number of extremely strong partnerships, but which has only now been climbed in one complete push. Hauser was accompanied during his 11 hour marathon by Alexander Holleis and Rupert Huber and the result is a great WI7 route which, apart from being extremely difficult, is also severely dangerous - the crux pitch contained a 36m runout onto a 8cm icescrew...

And as if that wasn't enough, not even a week later Hauser climbed the classic Supervisor in 1 hour and 40 minutes, alone and without a rope. For those who are unfamiliar with this climb, Supervisor is rated as one of the best and most desired icefalls in all of Austria. A true classic, first ascended by Josef Steinbacher and Hans Zlöbl on 18 January 1991 and which, in raw numbers, boils down to 270m of WI6. Superfluous to say though that without a rope all of this takes on a completely different dimension altogether. So much so that it is difficult to talk about an ascent of this sort. Just to be absolutely clear: these solo adventures, this level of risk (above all on ice) cannot be measured nor used as an example as a "rule of thumb".

Iice climbing history certainly teaches us that in the past solo climbs, even harder than this one, have been equalled or even surpassed. For example, perhaps not many know that back in distant 1982 Gérard Chantrieux carried out an immense free-solo first ascent (!) of the 200m III/5+ Cascade des Viollins at Freissinières. At the end of the '80's a series of solo repeats were carried out between grades 5 and 5+ at the hands of François Damilano on Erection (180m, 5+, Oisan - France), Alex Lowe on The Fang (60m, Vail - Colorado) and Ezio Marlier on Candelone di Patry (200m, Cogne - Italy). At the start of the '90's, US climber Mark Twight upped the ante by soloing the immense Canadian 900m 5+ called Sleepdream! In 1992 Ezio Marlier travelled to Canada where he carried out the great 900m solo of the famous Polar Circus Integral and also climbed the slender pillar The Pencil 6

Remaining in Canada, in the mid '90's Richard Ouary enchained Weeping wall (300m, 5+) and Ice-nine (95m, 6) at Rampart Creek. In 1996 Marlier repeated his grade 6 solo with an ascent of the 150m Repentance at Cogne, Italy. While at the end of the '90's Beat Kammerlander carried out some solo ascents of absolute valour in Austria, including the probable first solo ascent of a grade 7 route. Ueli Steck's fast solo ascent of Crack Baby, 6 stands out at the start of the new millennium, while probably the most extraordinary solo ice climber of all was Guy Lacelle. Between 1995 and 2000 the Canadian amassed an impressive number of free-solo's in Canada and Noway; Hydenfossen, La Pomme D'Or and The French Maid are just some of his "solo gems". And one mustn't forget his extraordinary five hour enchainment of Terminator, Sea of Vapours and The Replicant at Canmore which rendered the recently deceased Lacelle an authentic ice climbing "guru".

Now, returning to the original line of thought, about the "delicate nature" of these solo ascents and how they should be displayed, it seems clear to us that no one can stop or judge the "strange" desires which work their way into a climber's mind. Alpinism is, and wishes to be, free. Having said that, we would like people to properly bear in mind that the "sort of melancholic mood" and that "desire for change" which resulted, as Hauser explains, in his solo ascent of Supervisor. All alpinists know moments like this all too well, as do all men. But what is important is that one isn't led into believing that they must necessarily convert into "daring" or record ascents. In short, we would like choices, these choices, to be taken in a fully aware state of mind. We know that they are. We're certain alpinists know what they're doing and they know the risks they're taking. And this is certainly the case with Rudolf Hauser. But perhaps it's worth reminding that "moumtain climbing" must combine, above all, with life itself. It's also for this reason that we've published Hauser's text in full, to know and take part in the experience of the 27 year old carpenter, father of a four year old daughter, from Bad Hofgastein.


TO LIVE MEANS TO FEAR NO LONGER by Rudolf Hauser
The night before the 12th of January I packed my gear as usual and checked that my picks and crampons were razor-sharp. Tomorrow it's time to climb some ice again, I thought, and picked up the guidebook to leaf through it a bit. The weather forecast was good and it seemed as if tomorrow would be another brilliant day.

The next morning passed by with its usual, daily routing, but something felt different. I was taken in by a sort of melancholic mood, by the desire for change. I couldn't place this mood properly, since everything was perfect and everything in my life gave me strength. Nevertheless I picked up my mobile phone and got in touch with my friend Geri Zussner who, as I had expected, was already on his way to pick me up.

Hey, old friend, can you bring your camera and some jumars? At this point I couldn't give him a good reason for my spontaneous outburst. He wasn't too far from home so he turned around and got the equipment. A short while later I threw my rucksack into the boot of his car and we set off for the Eisarena, one of the world's wildest corners where people climb ice.

It was cold, the temperature was circa minus 10°C After the classic greeting the drive to the arena was relatively calm. But at half-way I was overridden by that feeling. What do you reckon about me soloing Supervisor? I asked, fully expecting a heated discussion. But instead I heard only a succint OK.

The first steps on the walk-in felt good and warmed me up a bit. When we reached the clearing, from where you get a great view onto the Eisarena, it looked down onto us. Threatening but yet so beautiful. Nestled snug in the Hohe Tauern. Geri allowed me walk on ahead to leave me alone with my thoughts. I was calm and found a good rhythm, efficient steps led me to the base of the route. My partner prepared to ascend the fixed rope which belonged to a summer project. As I got ready my eyes were constantly drawn to the ice shield. After half an hour's head-start Geri had reached a good height to document my climb.

I stomped slowly up the final meters to the start, as if I had to carry out a penance. The first blows into the ice felt good and the moves were rhythmical. After the first 80m I found a good place to stand for the last time and I used this tactical moment to bring my fingers back to life, to have a good grip for the next 200m. Anyone who's ever been ice climbing knows this heavenly feeling of elation when their fingers wake up for the first time.

So off I went! I climbed prudently upwards past massive ice mushrooms. The ice quality was good and my razor-sharp blades penetrated reassuringly deep into the frozen mass. I finally left that unpleasant section behind me and I reached the crux at circa 180m height. But before preparing for the overhanging section a cold ice shower froze me stiff for a second. Click, Geri was taking some shots.

OK, all's well, but now it was high time to get out of here. I was faced with a 3m ice roof but managed to avoid this by climbing to the right. It was steep, damn steep. A glance down into the void felt like freedom. Like life, so true and honest. My crampons penetrated the crystal clear ice. I climbed upwards, one blow after the next, until the frozen wet became less steep. The last 50m were only grade 5 ice. At the top I managed to snatch the final rays of sun. More points gripped the ice, it felt good. I stood at the top, totally drenched, hooked my picks into the grass, registered my friend's congratulation. Joy doesn't last long in alpine environment, an ice-cold wind started to blow. We descended to the start via the Höhkarsteig.

My end result: 19 years after the first ascent at the hands of Josef Steinbacher and Hans Zlöbl in 8 hours, I managed the first solo ascent of the extreme classic Supervisor on 12 January in 1 hour and 40 minutes without leashes and the help of other technical aid.

Many thanks to my family and friends. Thanks to Gerlad Zussner for his fantastic photos and particular thanks to my sponsors Lowa and Haglöfs for the first-class gear.