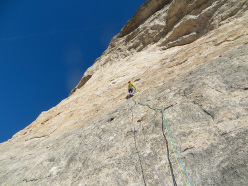 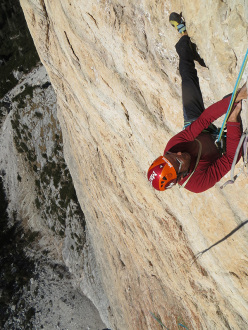 Rondò Veneziano on Torre Venezia, too beautiful to resist

On 23 December 2015 Nicola Tondini and Emanuele Pellizzari repeated Rondò veneziano (470m, IX), the route first climbed by Christoph Hainz and Kurt Astner up the South Face of Torre Venezia (Civetta, Dolomites). The report by Nicola Tondini of what is also the first winter ascent of this magnificent rock climb.

December 2015: while the Venetian plain was constantly shrouded in a grey and dull fog, the mountains seemed untouched by either cloud or cold. The sun, up there, shone for days on end high up in the clear blue sky and were it not for the long shadows so typical of the shortest days of the year, you'd have been forgiven for thinking that this were summer. So how could such beauty be resisted? And seeing that winter had officially started, I wanted to try something challenging and, givent the temperatures, great fun.

Emanuele (Pellizzari ed) and I discussed various options: we both really liked the idea of trying our luck on a beautiful route put up by Christoph Hainz and Kurt Astner on Torre Venezia: Rondò Veneziano (470m, IX-). This faces south, so it was bound to be enjoyable. According to the various comments we'd read on forums the route seemed tough and, after the 8th pitch, there'd be no rappelling back down due to the characteristic traverse at mid-height. An interesting prospect, seeing that most need 10 hours to repeat the route and that on 23 December there'd be less daylight, about 9 hours only. Furthermore, given the ideal conditions, we'd have loved to free climb the entire route, better still, repeat it onsight. Right until the last minute though we weren't 100% convinced this was the right decision.

23 December: I woke up at 2:20 (half an hour late... I didn't hear the alarm clock) and leapt into the car. I'd agreed to meet Emanuele at Busche at 4:15. The thick morning fog didn't help me make up for lost time. Nevertheless at 5.45 we set off from Capanna Trieste and just before 8.00 we were ready to start the climb.

We were still a bit worried: our half hour delay might jeopardise the outcome. I took two headtorches just in case and we set off, curious to see how this little Christmas adventure would turn out.

At 16.00 we reached the summit, happy with our onsight ascent and above all for the unheard of, magnificent day this early winter gave us.

Congratulations once again to the first ascentionists.