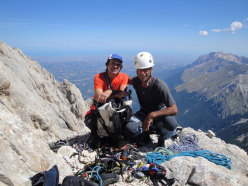 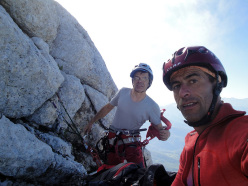 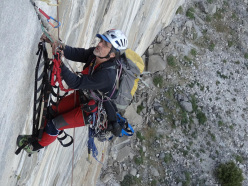 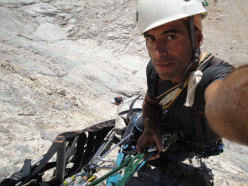 Roberto Iannilli and Luca D'Andrea have left us

The bodies of Italian alpinists Roberto Iannilli and Luca D’Andrea were retrieved today from the North Face of Mt. Camicia (Gran Sasso massif), Italy. Iannilli, from Ladispoli, was 62 years old, while D’Andrea came from Sulmona and was 51 years old. Both were expert alpinists. Iannilli was definitely one of the most well-known climbers from the Gran Sasso area.

The phone rings in the newsroom. "Hi, have you heard about Roberto Iannilli and Luca D'Andrea?" I know the voice, am familiar with the formula... Fumble a "No", full of gloom. I brace myself, already knowing what to expect. Roberto Iannilli and Luca D'Andrea fell to their deaths on the North Face of Camicia. Their bodies have just been recovered by helicopter. They had set off yesterday, were trying to establish a new route. That's how things stand. Just a few words, making sense of it all is difficult . What remains is that indescribable sensation of feeling lost. I think about Roberto. About all the times we’d heard each other and met up. And I think about his friend and climbing partner Luca. About their new routes on Gran Sasso. About their exploration of the East Face of San Lorenzo in Patagonia. And I even smile briefly as I recall the names of those two new routes they called Comrades from the fields and workshops and Class struggle. Only Roberto could have come up with two names like these... And, perhaps, only Luca could have accepted them.

Yes, without a doubt Roberto was special. Just as special as his love for Gran Sasso, his mountain. He had traveled its width and breadth. Repeating practically all the most difficult and important climbs. Establishing lots of new routes, together with others but also, very often, on his own. Roberto was a mountaineer and front line explorer, in words, deeds and also in his soul. He often dug deep into his passion for climbing, for adventure. He knew its merits, and also recognised its darker shades. He lived out his form of mountaineering with a sense of seriousness and wisdom often masked by witty irony. Those who write on PM (planetmountain.com’s forum) know this well, and right from the outset Roberto was one of the absolute driving forces of this platform. Talking of which, a melancholy smile crosses my lips as I remember his other passion, cars and racing. I’d been surprised when I first heard about it. But that is what Roberto was like, a great little man who always surprised you.

We owe a lot to Roberto "Jann Hill" Iannilli. Not only for the articles he gave us during all these years, but also for the friendship he always showed us. Looking back at what he wrote I can’t help but think about his description about that fateful mountain. Back in 1999 on the North Face of Camicia Roberto had made the first ascent of Vacanze romane - Roman holidays - together with Ezio Bartolomei. So when he told us about a new route on the same face we asked him to write an introduction. The new route was called Inferno con vista - Hell with a view - and had been climbed by Andrea Di Pascasio and Emanuele Pontecorvo. "Okay, I’m exaggerating slightly, the north face isn’t hell' is what Roberto wrote at the time "and it’s not even an ogre, but only a tall face, wide and marked by dangerous rock. But it’s true that climbing it is epic, a true adventure in an incredibly fascinating setting, horribly fascinating." We believe this suffices. There is no need to add anything more: up on that face Roberto and Luca knew what they were doing and wanted to do it. They were, and will forever be, simply alpinists, and this was their form of alpinism, the one they sought out and wanted.

In order to remember Luca D'Andrea we’d like to quote what Roberto wrote after the first ascent of Lotta di classe - class struggle - on the East Face of Corno Piccolo, Gran Sasso. "Luca is one of those who needs to be on the brink of dying in order for him to take some medicine. And here, suspended 200m above the scree, life is larger than life, and he needs no medicine at all. While I, husband of a pharmacist and used to sleepless nights, readily swallow those pills." Roberto had always tormented by his terrible headaches. But he and Luca, up on those mountain faces, searched for a life which was bigger than life itself. And for a long time they managed to live it just as they’d always wanted to.

>> All articles by Roberto Iannilli