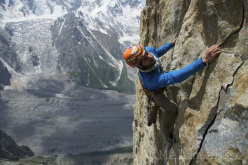 Martin and Florian Riegler have made the first ascent of Ramadhan (1100m, 9-, A2) up the virgin Kako Peak (4950m) in the Karakorum, Pakistan.

The South Tyrolean alpinists Martin and Florian Riegler report from Pakistan's Baltar region in the western Karakorum where on 01 August they successfully summited a hitherto unclimbed mountain which they have named Kako Peak. The first ascent was carried out over 4 days and the 1100m line climbs smooth slabs to reach a large ledge system and then continue steeply up cracks and corners.

As reported previously, Martin and Florian Riegler had originally set their sights on Darwo Chhok Peak together with Monika Mehlmauer and Christoph Mohl but conditions on this 5800m high mountain proved far too dangerous, hence the change of objectives.