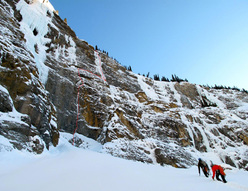 Pierre Darbellay and Bertrand Martenet approaching the Upper Weeping Wall, with the line of Pussycat to the right of the Weeping Pillar.
Photo by Raphael Slawinski 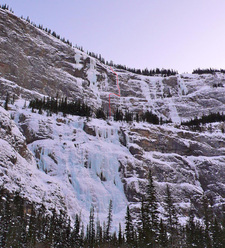 If you travel to the Columbia Icefield Parkway, bets are your going to climb Polar Circus or Weeping Pillar, two of the most famous ice climbs in the world. Not so for Canadian Raphael Slawinski who on 4 December teamed up with the Swiss Mountain Guides Pierre Darbellay and Bertrand Martenet to climb a thin sliver of ice to the right of Weeping Pillar which Slawinski had originally attempted in 2008 with Eamonn Walsh. The new 180m line is called Pussycat, offers interesting mixed and thin ice climbing, and now goes free at M7 WI5R.

On the nearby Stanley Headwall Jonny Simms and Jon Walsh established Man Yoga, a 250m, five pitch mixed route which was created over three seasons (9 days in total for Walsh and 7 for Simms) and which they freed on 13 November at M8 WI5. The route is located circa 200m right of Suffer Machine and was repeated recently by Slawinski who stated "Definitely something for winter visitors to the Rockies to add to their must-do list."

For more details and photos check out raphaelslawinski.blogspot.com and www.alpinestyle.ca