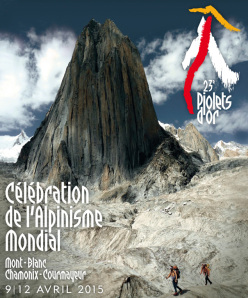 From 9 - 12 April 2015 Courmayeur and Chamonix become the world’s mountaineering capital with the 23 edition of the Piolets d’Or, the most prestigious mountaineering award.
Photo by Giuseppe Di Mauro 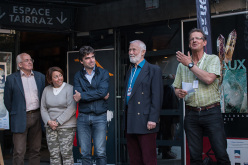 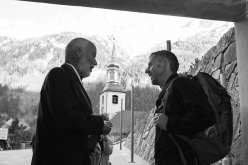 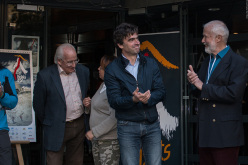 Piolet d'Or 2015: the world's mountaineering élite at Courmayeur and Chamonix

Courmayeur and Chamonix are the world’s mountaineering capital once again thanks to the Piolet d'Or 2015. The recipients of the 23rd edition of this prestigious award are Tommy Caldwell, Alex Honnold, Alexander Gukov, Alexei Lonchinskiy, Aleš Česen, Luka Lindič and Marko Prezelj. The 7th Piolet d'Or Carrière will be awarded to the great British mountaineer Chris Bonington.

The Piolet d'Or 2015 is currently in full swing. For the 23rd year the prestigious award is being celebrated at Courmayeur in Italy and Chamonix in France and after last night’s official start in Chamonix with the film Metanoia, which traces the incredible story of the highly talented and influential American alpinist Jeff Lowe, the program continues today in Chamonix. The evening is dedicated to the Age d’or, to the golden age of mountaineering and the occasion couldn’t be better: the 150th anniversary of the first ascent of some of the most symbolic mountains of the Alps, such as the Matterhorn, the Grandes Jorasses and the Aiguille Verte.

On Saturday evening the celebrations travel to the other side of Mont Blanc, to Courmayeur to be precise, with the grand finale ceremony during which the Piolet d’Or will be awarded to the selected ascents, as well as the Piolet d'Or Lifetime Achievement award. This celebration promises to be something truly special, with a small event within the event itself: after last year’s success, the L’Orage music group will play - for the first time ever - together with Trouveur Valdotèn, the historic group that for the past 35 years has worked tirelessly at promoting the tradition and culture of the mountains in Valle d'Aosta.

As is well known, this international team of nine climbers had the difficult task of choosing, from 58 expeditions carried out in 2014, the one that best respected the Charter of the Piolet d'Or. In the end three expeditions convinced the jury and so all three will be celebrated on stage by the evening’s host Kay Rush: the Russians Aleksander Gukov and Aleksey Lonchinskiy for their ascent on the SW Face of Thamserku (6618m) in Nepal, the Slovenes Aleš Česen, Luka Lindič and Marko Prezelj for their ascent of the N Face of Hagshu (6657m), and the Americans Tommy Caldwell and Alex Honnold for their Fitz Roy Traverse in Patagonia.

The Grand Soirée at Courmayeur will also celebrate the climbing career of British climbing legend Chris Bonington, the 'Sir' of mountaineering who in the ’60's through to the ’80's carried out a series of landmark ascents worldwide. The Central Pillar of Freney in 1961, the Central Tower of Paine in Patagonia in 1963 and the Ogre in 1977 (which remained untouched again until 2001) are just three of Bonington’s many first ascents, to which one must also add those he led, such as the 1970 expedition that first climbed the South Face of Annapurna and the 1975 expedition that breached the indomitable SW Face of Everest. Two climbs that literally changed Himalayan mountaineering forever.

The Planetmountain.com team had the honor of finding out about all this and more when it met Bonington at his house, hidden in the folds of the beautiful Lake District hills in northern England. For two days our crew created the exclusive short film that will be screened for the first time at the awards ceremony. A distillate, intense and at the same time very intimate, that retraces the life and thoughts of this great mountaineer whose name now joins those of other legends who have received the Piolet d'Or Carriere, namely Walter Bonatti, Reinhold Messner, Doug Scott,  Robert Paragot, Kurt Diemberger and John Roskelley


THE COMMITTEE HAS CHOSEN THREE ASCENTS:
The traverse of the Fitz Roy range

Argentina, Patagonia (3,405 m)
From 12th16th February 2014, Tommy Caldwell and Alex Honnold succeeded in completing the full traverse of the range, from north to south. They had to climb seven summits: Aguja Guillaumet, Aguja Mermoz, Cerro Fitz Roy, Aguja Poincenot, Aguja Rafael Juarez, Aguja Saint-Exupery and Aguja S, a total of 4,000m of ascent, a maximum grade of 7a, with ice sections at 65°. Such a traverse could only be contemplated by very fast climbers. Info

Thamserku
Nepal, Khumbu (6,618 m)
Alexander Gukov and Alexey Lonchinskii (Russia) have opened up a route on the South Face, at 1,620m. Their route, which required six bivies, has been named Shy Girl. They estimated it as grade 6a/6b (Russian grading), presenting some passages on steep ice with mixed sections M4-M5, and passages requiring artificial climbing (A2). The descent was via the South Ridge and the South-West Face in twenty-two abseils. Info

Hagshu
India, Kisthwar (6,657 m)
Aleš Česen, Luka Lindič and Marko Prezelj (Slovenia) opened a route on the North face of 1,350 meters high, ED, ice at 90°. The steepness and difficulty of the ice forced them to climb until two o’clock in the morning, on the first day. They summited the next day, 30th September, at 5pm, then descended by the original route, first opened in 1989 by Polish climbers. Info