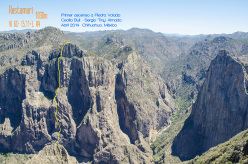 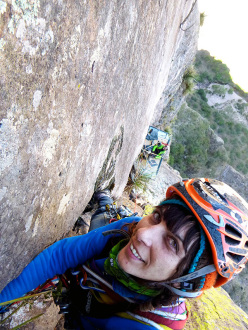 In April 2014 Cecilia Buil and Sergio Almada made the first ascent of Piedra Bolada in Mexico via their new route Rastamuri (VI, 5.11/A4, 1030m).

Same team, same country, same valley even, but this time up a different peak: a year after forging their Tehué up El Gigante in Mexico, Spain's Cecilia Buil and local climber Sergio Almada have now made the first ascent of Piedra Bolada in the picturesque Candameña canyon. Despite lying directly opposite the famous El Gigante big wall this 1000m+ peak had been untouched and was climbed by the duo via their route Rastamuri up the centre of its West Face. 17 days were needed, of which 14 were spent on the face, to breach difficulties up to VI, 5.11/A4. It's worth noting that the route is protected by a mix of trad gear, pegs and 59 bolts, 40 of which were placed at the belays. Meaning just 19 bolts in over a thousand metres of climbing, only there "where it was absolutely necessary."

Between the 8th and 27th of April Sergio "Tiny" Almada and I climbed in Candameña canyon, making that first ascent of this over 900m high virgin face. Situated in front of El Gigante, the first 300m of its south face are covered in plants and loose rock and this is probably the reason why this big wall had remained virgin until now.

The week before my departure Tiny looked at different new route options in the Candameña canyon and he sent me a photo of the west face of Piedra Bolada. I was surprised when I saw that the wall was continuous throughout, didn’t have much vegetation and looked as high as El Gigante.

I was highly motivated as that wall looked huge and interesting and a week later I flew to El Paso to start preparing the ascent.Three days later we reached Basaseachic and looked for Valentin, the local man who showed us how to reach base camp as easily as possible. We were joined by Isidro, another local who helped us carry some loads, while Oscar Cisneros would help us with the logistics and would keep in touch via radio every three days or so.

We started the approach in the afternoon of the 8th of April and reached the base of the face after a 6-hour hike and a bivy along the way. On 9th of April Tiny and I climbed the first pitch while Oscar brought water from the river, located about 80m below the start of our route (some sections of the face start directly from water level). We fixed the first three pitches (one 5.10 and two A4) and soon realised the lower section would prove slow and difficult so we decided to take food and water for 15 days. 84 liters of water…Our haulbags weighed 120 kg!

On12th of April Tiny and I left the ground, slept at the second belay and fixed the fourth pitch. During the first 10 days we climbed circa 600m and at times were happy when we climbed 50m a day. The lower section of the face does not have many cracks and the ones we found were either blind or were loose. We breached 5 roofs and climbed numerous aid pitches up to A4 and some free up to 5.11, while some runout pitches went at 5.10+. Our equipment was very heavy and slows us down significantly.

When we reached the first major ledge we finally saw light at the end of the tunnel, as the climbing looked as if it would go free and there were far more cracks that offered protection. From this point onwards we managed to free climb about 100m a day and this proved great fun, even the hauling!

We reached the second ledge on the 25th April. Oscar had abseiled down to take some photos and he slept on the ledge with us. From here we climbed a further three pitches and finished the route on 26th of April, after having climbed 24 pitches and spent 13 nights and 14 days on the wall. We slept on the summit and woke up to see El Gigante slightly below us. We were so happy! We had just done the first ascent of this huge wall and called our line Rastamuri. We left 59 bolts insitu, 40 of of which are at the belays.