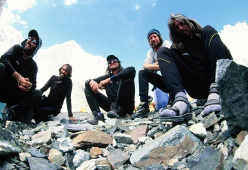 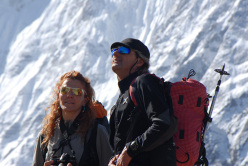 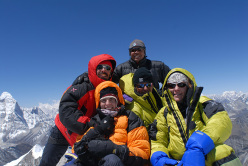 In remembrance of Oskar Piazza, mountain guide and member of the Mountain Rescue team who died in Nepal's devastating earthquake on 25 April 2015. By Manuel Lugli.

A long time ago I wrote that being a friend of Oskar was a bit like going uphill: one of those people that require effort and commitment if you want to get to know them. One of those who don’t reveal their inner self on the first and even second encounter, but instead require dedication and perseverance to deserve their friendship.

Oskar, basically, was like a mountain. Just like mountains he knew how to be difficult and harsh, but also generous, welcoming and wonderfully solar; he was capable of providing rare emotions or storms that no one, absolutely no one could avoid. But earning his summit meant never looking back, ever. Even after months and months of silence. Once you learn how to love the mountains you never stop, nor forget the steepest faces or gentler slopes to glide down. Yes, Oskar was a mountain.

Oskar and I went on wonderful trips together, shared difficult and at times extremely harsh expeditions. Never did we disagree, there was not one misunderstanding. With some people communication channels go far beyond simple words: these are the straight corners of sympathy that transform into empathy and then finally become friendship in its purest form. One didn’t see Oskar laugh often, but when we were together our friendship ignited into uncontrollable giggles, thanks in part to some of his wonderful quirks, such as his packing and unpacking of the gear containers, over and over again, to make sure all had been organised as rigorously and meticulously as possible.

Oskar certainly appreciated by somewhat modest organisational skills, but perhaps even more my good dose of very Emilian irony, which in many cases resolved tensions and problems and ended up with a big laugh. And when Oskar laughed he could be very contagious. The nickname I’d given him was physical oxymoron: Oskarino, little Oskar. I don’t think many people used it. Actually, I’d say no one did except perhaps his beloved companion Luisa, sometimes, when we were all together. But I’d earned the fun right after long years spent together.

His seriousness and training, his professional rigor were rare and demanded much respect, often genuine awe. I've never seen anyone work so much and so intensely, to the limits - and sometimes beyond - of mental and physical exhaustion. On rare occasions I even rebuked him; he listened, smiling good-naturedly, before obviously continuing to work on precisely like before. The many, grieving people who bid farewell to Mori are the strongest sign of how much Oskar has touched the lives of many men and women.

Our last trip together, in Nepal, our shared and beloved second home, was one of the most beautiful ever. As it happens, we spoke on the phone on 15 April, while he was in Kathmandu preparing his famous, complicated containers. A brief chat and a promise to meet up on his return. Now I have indelible memories that could fill pages and pages, memories that transform into nostalgia and pain.

How do you say goodbye to a mountain? The teutonic, somewhat military Bergheil certainly isn’t suited to Oskar, quiet and in a way sweetly pained. I prefer to the Nepalese greeting: Namaste, dear friend, that the spirits of the mountain accompany you and that Sagarmatha, the Goddess of Mother Earth, takes care of you.