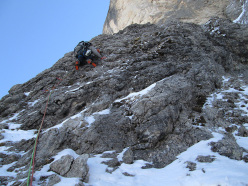 During the first winter ascent of Via Esposito – Butta up the North Face of Langkofel, Dolomites: Alex Walpoth on the difficult first pitches
Photo by archivio Giorgio Travaglia, Alex Walpoth 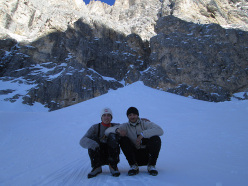 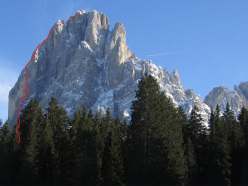 The route line of Via Esposito – Butta up the North Face of Langkofel, Dolomites
Photo by archivio Giorgio Travaglia, Alex Walpoth

From 18 to 20 February 2015 Giorgio Travaglia and Alex Walpoth made the first winter ascent of Via Esposito - Butta up the North Face of Langkofel, Dolomites.

Although the winter season is now behind us, it's worth trying to concentrate on some ascents we’ve failed to mention so far. For example the first winter ascent of the Esposito - Butta route up the north Face of Langkofel, carried out last February by Giorgio Travaglia and Alex Walpoth.

This long route- almost 1000m in total to the left of the more famous Soldà route - was first climbed on 13 and 14 June 1940 by Ercole Esposito, called "Ruchin", and Gentile Butta with one bivouac on the face and one beneath the summit as the the two did not know about the bivouac built shortly beforehand just below the top.

Walpoth and Travaglia timed their ascent for 18 and 19 February, with one bivouac on the face. On the 19th of February they slept in the bivouac below the summit and descended safely the next morning.

Both alpinists had already climbed the route during one long summer day two years ago, with the aim of subsequently climbing it in winter. Furthermore, this year Walpoth repeated the Pichl route with a friend; the Esposito - Butta joins the upper pitches of the Pichl line and according to Travaglia, they benefitted greatly from this knowledge for their first winter ascent. Travaglia explained “had we not known the route so well it would have taken at least three days and another bivy on the face. For me it was, apart from the technical difficulties that reached grade VI +, my hardest climb so far. "