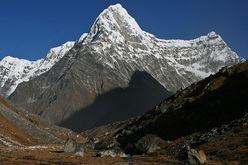 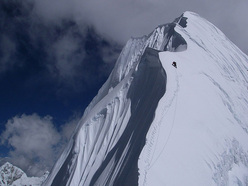 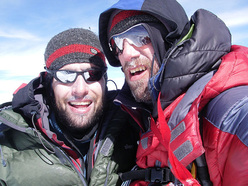 Joe Puryear and David Gottlieb have completed the first ascent of Kang Nachugo (6735 meters) in the Rolwaling Himalaya. Climbing for 5 days in alpine style, the two summited their 1800m route on October 17 after having overcome 90-degree snow and ice.

American alpinists Joe Puryear and David Gottlieb have carried out an important first ascent in Himalaya's Rolwaling valley, climbing the strikingly beautiful Kang Nachugo in alpine style over a 5 day period via the South Face and West Ridge. Success came after an attempt via the South Face direct ended at circa 6400m.

Puryear and Gottlieb established Base Camp towards the end of September and immediately began acclimatisation, reaching the summit of trekking peak Ramdung (5930m), Yalong Ri (5630m) and a further two peaks. They then turned their attention to their main objective, scoping two possible lines, the S Face direct or the long West Ridge.

Opting for the former, they first established a camp at the end of the moraine, then spent a day climbing 1100m before establishing their first tenuous bivy. The next morning dawned clear and they set off for the final 800m but climbing became technically more difficult. Poor weather set in and at circa 6400m the two opted to retreat, making circa 20 abseils on V-threads in worsening conditions before soloing the final meters to their camp.

Puryear and Gottlieb rested for a few days, then turned their attention to the West Ridge. Reaching this proved to be an test in its own right; after reaching a high camp on 14 October, they set off at 11pm, night-navigated through 500m of broken glacier and climbed 600m of dangerous fluted ice to join the ridge proper in a single 16-hour push. Views from the ridge into Tibet were stunning, but establishing a bivy on the knife-edge crest proved nothing short of suicidal and, at this point, they were forced to continue up the crest to bivy on a flatter section.

They were greeted with a cold and windy morning but thankfully progress along the ridge was quick although not without risks, testing their Alaskan apprenticeship to the full. A third bivy was established after having passed what they deemed to be the point of no return and the next morning the two continued the arduous task of climbing the airy ridge. Intense cold (making Alaska feel mild) threatened progress, yet they reached the true summit at 13.30. The wind abated at they celebrated for half an hour before returning to their last camp.

As they rested a major storm hit the Himalaya for 24 hours. With dwindling provisions they chose to descend the next morning along a line they had studied on their digital camera. Abseiling down cliff bands they made the most of V threads and their spartan gear and, with a good dose of luck, escaped from the South Face 20 abseils later. Both climbers suffered slight frostbite, but this failed to stop them from seriously celebrating in nearby Na after their major climb.