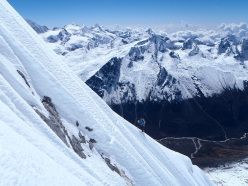 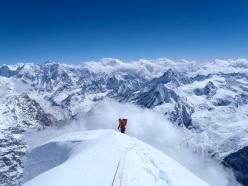 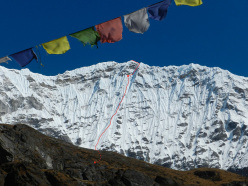 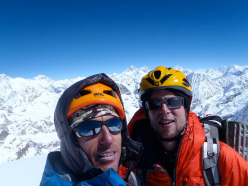 On 21 and 22 October 2013 Santiago Padros and Domen Kastelic made the first ascent of Monsoon (1500m /75°) up the SW Face of Kang Nachugo East, Rolwaling valley, Himalaya, Nepal.

In autumn 2008 Joe Puryear and David Gottlieb travelled to the Rolwaling valley and made the first ascent of Kang Nachugo (6735m) by ascending the West Ridge alpine style over 5 days. Prior to this success the two had attempted to forge a direct line up the SW Face but were forced to bail from 6400m due to bad weather. In the ensuing years the formidable Puryear – Gottlieb climbing partnership established numerous other fantastic routes such as up the South Face of Jobo Rinjang in 2009 and up the East Face of Takargo in 2010. Unfortunately though tragedy struck in October that same year: Joe Puryear fell to his death on Labuche Kang while attempting to establish a new line together with Gottlieb.

Padros and Kastelic reached Nepal at the end of September for "an exploratory expedition in the semi-unknown Rolwaling valley" but the unusually long monsoon forced them to choose an objective right at the very last minute. With just 5 days at their disposal before returning to Europe, they headed to Kang Nachugo.

On 20 October the two alpinists reached Advanced Base Camp at 5200m and the next day they set off early, climbing non-stop until 18:30 and bivying at 6400m. After a cold, sleepless night they continued on and reached Kang Nachugo East summit, at 6640m, at midday on 22 October. The main summit was in view but the exposed ridge that leads from the East Summit was in dangerous condition, so the two wisely decided to descend; 7 hours and 20 abseils later they returned to ABC, while the village Na was reached the next day. After the 2008 climb by Puryear and Gottlieb, the recent ascent by Padros and Kastelic is only the second route up this mountain.

Domen Kastelic from Slovenia and I set off at the end of September on an exploratory expedition in the semi-unknown Rolwaling valley, close to Everest. This year though the monsoon was longer than normal and surprised us with more than 2 metres of fresh snow in mid-October above 5500m! This dashed all our hopes of "extreme" alpinism and with just five days remaining we had to take some fast decisions.

Our base camp was located at Na, a small village at 4200m where the only fresh vegetables are potatoes and wild chicory! A group of three 6000m summits is located 2500m above the village: Chekigo 6257m, Bamongo 6400m (still virgin) and Nang Nachugo 6735m (climbed just once). The base of these south faces were almost completely devoid of snow and so we decided to check out the SW Face Kang Nachugo as this seemed to offer something not too difficult that could be climbed relatively quickly. In 2008 David Gottlieb and Joseph Puryear attempted the line which we would now finish, but at the time they were forced to bail at 6400m due to a sudden change in the weather (Ed. the Americans then went on to climb the West Ridge).

On 20 October, just 5 days before our return, we made our way to Advanced Base Camp at 5200m at the base of the face. The next morning we started up ramps which didn't exceed 60° and alternated at breaking trail. At 9:00 the sun began to warm our heads... towards midday we breached the 6000m barrier. We began to feel tired and tied in for safety, and continued up slightly more vertical terrain, past some icy sections. From 15:00 onwards we began to look out for a place to pitch our tent but it wasn't to be! In fact, we climbed until 18:30 and failed to find a suitable place for our micro-tent, brr! A 20m abseil led to below a small roof; here we hacked a small ledge to lie down and spend the night, but sleeping was out of the question!

We got up at 6:00, tired of trying to keep our feet warm, the -15°C temperatures certainly didn't help matters. We were at 6400m and needed almost 2 hours to get ready. Three difficult ice pitches and one up snow and rock led to the dangerous ridge and the summit. At midday we reached the East Summit of Kang Nachugo at circa 6640m! The main summit lay there, still distant, and since the route was exposed we decided to start the descent and try and exit the face that same day. 7 hours and more than 20 abseils later we returned to ABC in the dark. Tired and happy we celebrated our achievement and slowly descended to Na the next day from where we began to prepare for the long return home.

While staying in the valley we met numerous local people and they treated us like one of their own. After our climb we decide to make a donation, the equivalent of the mountain permit, to the Beding Monastery, to support the valley and feel at peace with our acts of "piracy"...