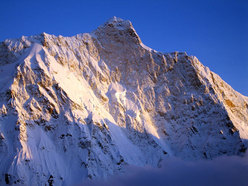 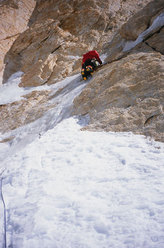 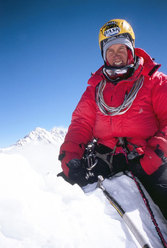 Valery on the summit of Jannu. Kangchengunga can be seen in the background.
Photo by Babanov collection 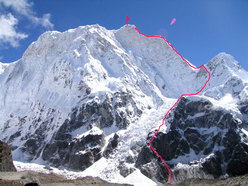 The line of ascent
Photo by Babanov collection

Interview with Valeri Babanov after the alpine style ascent of the West Pillar of Jannu (7710m) together with Sergey Kofanov on 21/10/2007.

On 21/10/2007 Valeri Babanov and Sergey Kofanov carried out what is to be reagarded as one the most important ascents of the year, if not more: the ascent of the hitherto unclimbed west pillar of Jannu (7710m) in pure alpine style. No fixed ropes, no fixed camps, for difficulties in the region of VI/WI4+/80° /M5 along the 3000m line. Translated for the non-initiated this means a route which combines rock, ice and mixed in a sort of university of extremely lightweight mountaineering at altitude.

For 43 year old Babanov the ascent into the unknown is the crowning moment of a 7 year old dream. We decided to interview him to find out more, to enter not only into this immense wall but also into the mind and the motivations of this great Russian mountaineer who, not by chance, has two Piolet d’or's to his name.

Jannu West Pillar - interview by Vinicio Stefanello
Congratulations Valeri for the ascent. Was this your first time on Jannu? And how did this project for a new route come about?
Yes, this was my first time on this great mountain. I had dreamt about Jannu for many years (7 years, at least). In the beginning I thought about climbing the North Face direct but a couple of years ago this route was climbed by the Russians. I nevertheless never stopped dreaming about Jannu and I still wanted to make a new route, my own, to the top. The W Pillar of Jannu is a very logical way to the summit and it's also beautiful and challenging.

What doubts and worries did you have before you started and what were the uncertainties of this project?
For all expeditions to Himalaya, the weather is one big worry and uncertainty. The weather was very unstable and we couldn’t wait for the next lucky break so we had to start climbing with the first sunny forecast even though we hadn't acclimatised properly (our acclimatization peak was Merra, 6300m while the top of Jannu is 7710m).
The other thing that worried us was that the route was very long (about 4500 m) and we weren’t sure if we'd have enough gear to come back via the same route, especially in bad weather. As an alternative we considered a descent down the other side of the mountain into the other, for us unknown, valley.

Can you describe the new route?
The route is very challenging and committing. I would say this line is comparable to a combination of Les Droites North Face and the Croz Spur on the North Face of Grandes Jorrasses, but at a higher altitude. We guess the route is 3000 m/VI/WI4+/80 degrees/ M5. As to the danger, I'd call our route quite safe - if this word is at all applicable to one of the greatest mountains in the Himalaya!

Did you have any difficult moments? Can you describe these?
You've got to be kidding! What would you call an easy moment on a route up one of the most difficult mountains in Himalaya?! Let me rephrase your question: "What was the most difficult moment?" Well, I think it was the last night before the summit. We spent it at 7600m without sleeping bags, it was quite cold and we practically couldn't sleep at all. After that night we still had to climb some very steep and difficult pitches.

Your climb was in perfect alpine style: what does this definition mean to you?
No fixed ropes and no fixed camps - that’s what alpine style is all about, right? We only had 2 ropes (5 mm and 8 mm), 7 ice-screws, 12 pegs, a set of nuts, 4 snowstakes and a few cams. We used a very light tent (1 kg) and a very light double sleeping bag (800 g), 5 cartridges of EPI-gas and 8-day provision of food. Our backpacks were about 20 kilos each.

Describe the ascent
Our BC was at 4700m. On the first day we crossed the glacier and climbed the rock buttress to 5500m. Over the next 2 days we climbed the Sabitong North Face and reached the base of West Pillar (6350 m). The West Pillar took us 3 more days and we got to 7200 m, where the pillar merges with the SW ridge of Jannu. From this point we continued along the ridge and climbed the Jannu summit tower. We deposited our sleeping bag, some food and some gear at the base of summit tower (7300 m). Our last so-called bivouac was at 7600m: we spent the night without sleeping bag. We reached the summit on October 21st.

What will you remember about this expedition and this mountain?
Of course I will always remember this line, its challenge and beauty, our fears and doubts and finally, our success.

Many have questioned the deeper meaning of mountaineering. Perhaps an answer to this "impossible" question can be found in the dreams of the mountaineers themselves. What is your dream as a man and a mountaineer?
This question is impossible, indeed! I really don't know what to say... I climb mountains and I enjoy it... this is my life and for me climbing is as natural as breathing...