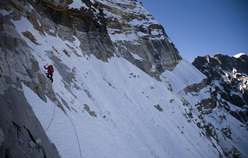 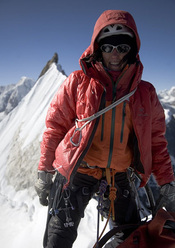 Ines Papert on the summit of Kwangde Shar, Nepal
Photo by Cory Richards

On 18 January 2009 Ines Papert from Germany and Cory Richards from Canada reached the summit of Kwangde Shar, a 6093m high mountain in the Thame valley in Nepal. The two weaved a new line dubbed 'Cobra Norte' (WI5, M8, TD & R) up the cold north face before joining the French route on the East Ridge and continuing up to the summit.

34 year old Papert had initially travelled to Nepal together with Canadians Audrey Gariepy and Jen Olson in the hope of forging a new mixed line in winter up the difficult north face with an all-female team. The trio reached base camp around Christmas and after a brief acclimatisation set off on their first attempt up the right-hand side of the face. Things proceeded smoothly on the first day but climbing nervously up thin ice and loose rock Ines dropped her rucksack on day 2; the trio continued to the ridge at circa 5850m but then wisely opted to retreat.

Time had run out for the group but a chance encounter with Simone Moro and Denis Urubko on their way to Makalu motivated and convinced Papert that the face deserved another chance. While Gariepy and Olson returned home to Canada, Papert managed to switch her plane tickets and teamed up with expedition photographer Cory Richards for another go on the mountain.

The two identified a weaving line up the left-hand side of the face and on 8 January transported food and equipment for a 5 day push from their comfortable base camp 1400m vertical meters up to the base of the wall. Setting off at sunrise the next morning, the two spent the next 10 hours climbing through extremely cold and windy conditions. Ines commented that M13 had felt easier than the serious snow and ice she encountered that day.

Day two dawned with a nigh catastrophe as rock fall cascaded past their bivvy. Shaken but not stirred the two climbed for another 10 hours with Ines leading the harder technical pitches. Cold and exhausted, they established their second bivvy after having gained a mere 300m in altitude.

On their third day the duo realised they would not be able to tackle the imposing headwall since the granite was devoid of ice and climbing without gloves in winter and at this altitude simply inconceivable. Navigating through a series of snow bands they broke left and reached the East Ridge shortly after midday, joing the 1996 French route. Papert and Richards dumped their gear at a bivy site located between two granite blocks and continued upwards but turned around at 17.00, with the summit in sight but dehydrated and unwilling to risk being benighted without gear.

On day four the jet stream had not let up but the two made fast progress as they ascended their fixed ropes and reached their previous highpoint in little over an hour. They then continued through a maze of mixed terrain and reached the summit at 14.30 in high winds. After the ritual summit photos they descended, hampered by the cold and stuck ropes, to Camp 3 and returned to the safety of their base camp the next day.

The north Face of Kwangde Shar was first ascended in December 1982 by the Americans Jeff Lowe and David Breashears (ED2, WI6, 1200m). Congratulations to both Papert and Richards for this impressive Himalayan debut!