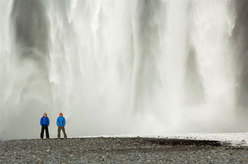 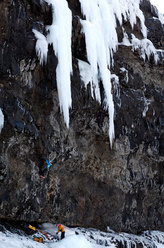 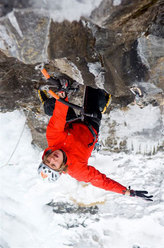 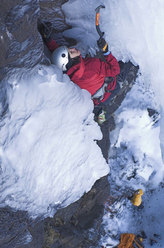 At the end of February Albert Leichtfried, Markus Bendler, Ines Papert and Audrey Gariepy travelled to Iceland to explore its potential in memory of their friend Harald Berger who died tragically in December 2006.

At the end of February Albert Leichtfried, Markus Bendler, Ines Papert and Audrey Gariepy travelled to Iceland to explore its potential in memory of their friend Harald Berger who died tragically in December 2006. With Iceland locked in a deep winter, the expedition turned out to be a great success: the four travelled in two seperate teams across the width and breadth of the island, repeating existing lines, establishing a host of new routes and even finding the time to pop the all-important question. Details of their expedition are published below.


by Albert Leichtfried
The name of the land itself – "Iceland" – sounded very suspicious to us ice climbers. Anyway, suspicious enough to carry out an investigation and get some information about the ice potential of this land. And so, equipped with countless emails of the very friendly local climbers we - Markus Bendler, Hermann Erber and I – landed in Reykjavik, on February 20th 2007.

Our plan - Once all around the island
While Hermann’s head was full of different motives for taking good pictures and Markus was exhausting the 183 horse power of our 4WD Jeep, my only concern was the weather. Being a meteorologist I knew exactly about the uncertain temper of the Icelandic low pressure area, as well as about the permanent returning and multi-day thaw periods. Compared to our winter in the Alps the Icelandic winter seemed to be a very strong and cold one. Thank God!

When we arrived at out first meeting with the locals in the house of the Icelandic Alpine club it was minus 2Â°C. Our plan was more or less fixed – we wanted to travel around the whole island and make a stop at the ice climbing festival in Kaldakinn, which had been specially postponed for a week so that we could take part and give a slideshow there. Our main focus though was settled in the yet unexplored Eastfjords. The weather forecast was on our side to start of with – the weather maps promised cold, really cold temperatures the following days...

To get used to the different situation we started on the west side of Iceland with the routes "Alien Muffin" WI 4 and "Dordingull" WI 5-, which were first climbed by no one less than Guy Lacelle. We also had to get used to the Icelandic weather – lightening fast changes from sun to snowstorms, with wind blasts up to 120 km/h.

Kaldakinn - 3 pitches for "Captain Hook"
When we arrived at Kaldakinn our attention was captured by the long face, numerous kilometers wide, with over 30 routes of all grades, which seemed to be in perfect conditions. First we made our way up the classic "Stekkjastaur" WI 5/6. The unbelievable and very special thing about Kaldakinn is the fact that you can climb directly from the seashore – a fantastic feeling and an unforgettable adventure. To reduce the deficit of mixed routes in Iceland we decided to start work and bolted a 3 pitch route. We named it "Captain Hook", after a special friend’s nickname - Hari Berger - who we lost last December. "Captain Hook" is a dignifying remembrance of Hari with a big amount of ice, delicate sequences on fragile ice glosses and drytooling moves on cracks in between – a worthwhile line with difficulties up to M9+.

After a relaxing bath in the 44Â°C hot lagoon at Lake Myvatn our real adventure started. We tried to find new potential at the Eastfjords. During the first three days of searching we found a short but spectacular waterfall – partly ice and with water flowing down beside the ice. We named the route "Zoe Harisdottir" – it reminded us of Hari and Kirsten’s tiny and cute daughter Zoe.

Marry me? - An extraordinary day
Because of the snow storming weather outside we sat inside in a bar and ordered a bunch of coffees. Accidentally we saw a postcard showing the 118m free falling waterfall "Hengifoss". At that point I was almost certain that this huge fall would not have formed enough to climb. But we didn't have anything else planned and so we decided at least to take a glance. After 1,5 hours of walking in the dodgy weather we found a totally strange ice formation. And the climbing was as crazy as it looked - it was definitely the maddest waterfall I have ever climbed! I baptized the route "Marry me?" - graded solid WI 6+. I did not name the route like this for nothing – when I returned to the car I sent a SMS to my girlfriend Vroni. In the end we have a marriage to celebrate after ten years of close partnership!

Eastside paradise – The discovery of a new area
One day after "Marry me?" we drove to the next Fjord and hit bull’s eye. We could not believe our eyes when we discovered the 20km long face with one ice-line next to the other. I studied the weather forecast again and found out that a strong thaw period was heading towards us. So we had to make the most of the following day. Of course, we chose the three most impressive and beautiful lines and climbed the whole day in temperatures slightly above the freezing point. The result were the enjoyable routes "Sundlaug" WI 4/5, "Albatros" WI 5 (at 180m the second highest waterfall of Iceland) and "Superbelly" WI 5.

"Normal" tourists
The next day the thaw period got stronger, we put our ice climbing gear to one side and meddled with the usual tourists in Iceland. We took a look at "VatnajÃ¶kull" – the biggest European glacier, the impressive waterfall "Skogarfoss" and enjoyed ourselves climbing on different buildings of Reykjavik. Fact is – to answer the most popular question of every Icelander - "How do you like Iceland?" - we can only say - "We loved it!"


Northbound ice climbing expedition - Iceland 2007
by Ines Papert
We travelled to Iceland as a four-member team. Although the ladies had different targets than those the of men, we met up again and again during our stay. This meant that we explored different areas of the island. The result: numerous first ascents up to M10 and WI6+ and loads of fun whilst climbing them!

It’s such a small place, only 102.000 sq km! And there are so many contrasts here, right next to each other! On the one side: hot springs, smoking Earth, volcanoes and geysers... the hot element. And on the other: snowstorms, glaciers and vertical ice. All of this made our hearts, full of passion for the icy-cold, skip a beat and race faster.

I travelled with Audrey Gariepy, a 26-year old from Canada, and discovered that she was my dream partner. She impressed me not only with her climbing technique, but also with her cheerful and irrepressible manner. We never stopped enjoying ourselves whilst ice climbing, even when the wind and the extremely humid conditions continually put us to the test.

New routes up to WI6+
Our adventure began up North in the Kaldakinn Region, which offered a number of very challenging ice-climbing lines. Interesting routes were lined up one next to the other and we found it hard to choose which line to climb first. But we were drawn in by the hard lines only, those left untouched for us by the approximately 40 Icelandic ice-climbers.

This meant that we could first ascend a number of new routes. Our first route led through an overhanging face with many icicles and drips. We dedicated the pleasing result, “Wish you were here” WI6+ to our friend Hari Berger who died recently. The next day we made another two (presumable) first ascents with “Coconut” WI 5+ 100m and “Thule” WI 5+ 120m. That evening we decided we needed a proper, “respectable” project.


1000m: the 1st attempt -- can we do it?
I’ve always harboured an old idea: to create an imaginary 1000m waterfall, in which you have to climb so many routes until the height of this imaginary waterfall is reached. I sold this idea to Audrey extremely quickly: she was enthusiastic about it straight away. That evening we chose a number of routes (each between 80 – 100m high) which we would start climbing at daybreak. Unfortunately though our well-thought out plan failed to work: at dusk we had climbed a “mere” 550 meters. Difficult conditions on one of the routes up to WI6 cost us precious time, some of the waterfalls were way to far from each other, and added to this we also made a few logistical mistakes…

But in doing so we accidentally made the first ascent of a WI6 ice pillar. We named it “Akkulaar”, since our batteries were fast running out at the end of the day. Although the original project remained unfinished… our ambitions remained undeterred.

First Ascent M10
We drove east to the jagged fjords. After a long day’s drive we failed to find the long waterfalls we had expected. But the day wasn’t to end in disappointment. Just before sunset we discovered a rocky amphitheatre close to Breidalsvik – the tops of the routes all had hanging drips. We could finally unpack our Hilti and equip a mixed route. The next day I set off, somewhat in awe of the not 100% solid basalt, towards the drips. We then worked the hardest moves and that same day I managed to redpoint the route. Audrey sent the line, “Chocolat chaud” 40m, the next day, while our photographer Rainer Eder spun up his static rope to shoot the action… the result are some fantastic photos.


1000m – the 2nd attempt – 2nd time lucky!
But our 1000 m project idea still disturbed our sleep… “We can do it” (eh, Audrey?)… This motivated us to head back North, to Kaldakinn once again. There we met up with cameraman Jochen Schmoll, who had been sent to iceland on behalf of the German TV station Pro 7. He was going to film us for the series “Galileo” (broadcasting day in KW13).
We had to plan and re-think our logistics to save precious time, but we definitely didn’t want to forgo our safety during the leads. At times the second climb would have to climb extremely fast, and we were sure that the belays, gear changing and rope handling could be organised better. As a result we changed the choice of some routes and decided to simul climb several easier sections.
We set off on 7th March at 7 a.m. in front of the running camera - it was still dawn, and pretty dar). We began with some relatively hard routes (WI5+), and after 400 meters we moved on to the “Steep Gullies”, which are much longer and distinctly harder that what we have expected from below. The climbing here was always in the region of WI4 to 5.
The entire day passed very quickly. But finally, in the light of our head-torches and after 13 hours of non-stop climbing, we topped out on the last of the 1000 meters. We embraced each other, happy but totally exhausted,. It was a very interesting experience, both physically and mentally extremely challenging. Our dream had just come true.

We said goodbye to Iceland after two weeks of climbing, filled to the brim with impressions and emtions. Even before our departure back to mainland we’d already started planning our next trip together. Audrey enriched me with her real friendship, one which goes way beyond our climbing ambitions. I would also like to express my gratitude to the local ice-climbing scene. Their helpful tips enabled us to spend an unforgettable time in Iceland.