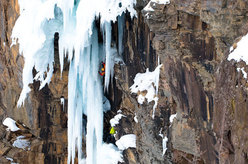 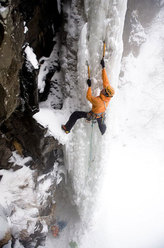 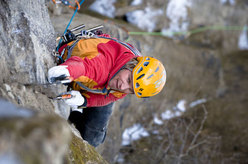 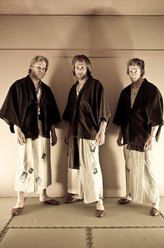 The trio
Photo by Hermann Erber

Albert Leichtfried, Markus Bendler and photographer Hermann Erber have just returned from an ice climbing trip to Hokkaido, Japan, during which they made the first ascent of Lector WI7 at Chiyoshibetu, before climbing in Raiden, Sounkyo and Abashiri.

With little information to go by, the Austrians Albert Leichtfried, Markus Bendler and photographer Hermann Erber travelled to Japan in search of the country's ice climbing potential. Apart from making the first ascent of Lector WI7 at Chiyoshibetu, the trio travelled to other areas such as Raiden, Sounkyo and Abashiri, experiencing a culture far removed from what they have become used to. Their full trip report is published below, as is their interesting video.

For skiers the Japanese Alps are already a well known place and paradise. The strong winter in Hokkaido, Japan's most northern island, offers loads of powder and cold temperatures. This should actually make it a perfect ice climbing destination. However, there is very little information in Europe about Japanese ice and the actual ice climbing possibilities. A trip to a land where you communication is virtually impossible, where the normal course of life is totally different than the one you are used to and furthermore where you are constantly searching for climbable ice, is a real adventure. But regardless of these difficulties, at the end of this ice climbing season Markus Bendler, Hermann Erber and I wanted to confront such an adventure.

A leap in the dark
After long preparations for this journey one thing immediately became clear: without any help of a local or someone who speaks Japanese and is familiar with the Japanese culture and mentality you are going to be totally lost over there. I therefore tried to contact the local ice climbers and asked for their help. This turned out to be a real challenge because in Hokkaido there is only a bunch of ice climbers and most of them don't speak any English at all. And as I found out, answering any question with “Sorry, I do not know” isn't part of the Japanese mentality. This didn't make preparations any easier. In the end it took me about two months to find a handful of climbers capable of understanding our questions. With very little knowledge about what was going to happen to us in Hokkaido we jumped on the plane for Sapporo on February 26th.

Making plans with the hospitable locals
On our arrival in Japan we had laughed about the totally different world and mentality more than once. While we picked up our RAV4 at the car rental we caused the first sensation. The woman at the rental office couldn't believe her eyes when she discovered that we weren't able to speak Japanese and that we were actually searching for the steering wheel on the wrong side of the car…
Sebastion Nault, who turned out to be the most helpful contact over there, picked us up from the airport and supported us during our time in Hokkaido. The next day he invited the whole local climbing scene and his outdoor education students to his flat. With a spontaneous slide show we talked about past adventures and over sushi and beer we planned our time on the island together with the friendly and hospitable locals. Although we had landed in Sapporo during a huge snowstorm, the ice climbing season was reaching its end in Hokkaido. We decided to start off at the warmer coastal areas, leaving us with the possibility to climb at the cooler spots in the centre of the island in case of a thaw period.

Successful start - first ascent of “Lector” WI7
Our first climbing destination was a coastal spot called Raiden. Directly on the seaside we climbed “Nairu” WI6 and “Runzee II” WI5. I wasn't only satisfied with the salty air and its soothing effect on my cold, but also with the fact that on our first day we had a lot of fun climbing the challenging Japanese ice.
At the weekend Genki Narumi - one of the Japanese ice freaks - joined us and showed us a mixed climbing crag in Chiyosubetu which has the hardest mixed routes in Japan up to M9+. On the way to the crag we were attracted by a stupendous ice formation located right in the middle of the mixed routes. On closer inspection we decided to skip the mixed routes for this ice monster with its giant natural ice roof at the top. The third pitch had incredibly steep ice and we had a hard struggle in redpointing it. Because this tough formation taught us a lesson in waterfall ice climbing we named the line “Lector” and graded it WI7.

Sounkyo - the centre of ice climbing in Hokkaidos
After these intensive days we chose to relax dawdling around in the high-tech world of Japan's big stores. The snowstorms came to an end and spring was about to come - so we were headed to Sounkyo, the real centre of ice climbing in Hokkaido. With temperatures around -10°C we climbed some classic routes, as well as the impressive line “Little princess”. This 200-meter climb offers varying climbing around M8+, A1, WI5+. Including the photo shoot, we spent a whole day in this demanding route. As usual when you're having fun time flies. At the end of our trip we wanted to visit the spots at the east coast and to explore a peninsula for new routes.

Spring is coming - time to go back
Directly ay the seaside we climbed on the scenic sea cliffs of Abashiri, surrounded by several sea eagles and tons of ice drifting in the sea behind us. This is a really special place, but sadly it was already too late in the season and the temperatures were too warm, which meant that we could only climb one route. On the peninsula we had to cancel our first ascent attempt of a European style waterfall due to these warm conditions - a big ice roof broke just a few meters away, forcing us to leave immediately. Spring had finally arrived in Hokkaido; before starting the long journey back to good old Europe we drove to Sapporo and explored the Japanese night life, which turned out to be as different and unique as everything else over there.


Japan Ice climbing information
Raiden Kaigan
Circa 80km SW of Sapporo, located directly above the sea, Raiden boasts the most spectacular icefalls in Hokkaido
Info: 6 routes from WI4 to WI6+

Chiyoshibetu
Circa 120km NW of Sapporo and located directly above the sea, Chiyoshibetu is currently the mixed climbing area in Hokkaido
Info: circa 20 routes from M6 to M9+, and also WI4 to WI7 (Lector)

Sounkyo
Located in the centre of Hokkaido, this is the coldest part of the island (-20°C in January is not uncommon) and also the area with the most classic routes.
Info: circa 15 routes, WI3 - WI6 and M7 - M8+