Setting off from Padova.
Photo by archivio G. Zaccaria 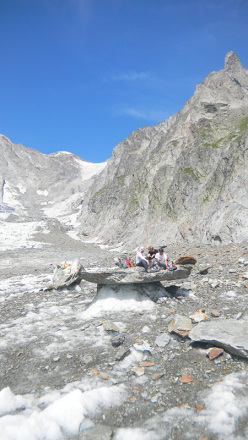 PORTFOLIO / gallery Portfolio: Heart and muscles: Mont Blanc on foot and by bike

Heart and muscles: Mont Blanc on foot and by bike

From Padua, close to Venice, all the way to the summit of Mont Blanc: a bicycle ride that culminated on the summit of the symbol of mountaineering. A great adventure experienced at just the right speed which, three summers down the line, still lives on in the memories of the young cyclists and alpinists: Giovanni Zaccaria, Claudio Gavagnin, Giuseppe Frizziero, Francesco Facco. The report by Giovanni Zaccaria.

Crazy ideas, however wacky or brilliant they might be, often come about by chance, when you’re far away from the mountains, perhaps legs under the table while joking around and laughing about over couple of beers. Above all though, they come about when the friends are the right ones. We can’t even remember who first said it "This summer... let's discover Mont Blanc." Someone else then added: "Yes, but ... let’s cycle there!” From that point on we stopped thinking about it. The seed was sown, a somewhat crazy idea, and nothing else was needed.

We met up in early August in Padua, Claudio "Gava", Beppe, Francesco and I. We’d just returned from scout camps and other adventures, we had no plans, just dreamy ideas that needed sorting out. The cryptic weather forecast was variable, leaving room for action. We gave each other a day and a half to gather all the necessary equipment, to improvise the load carefully balanced on two thin wheels and to photocopy the map of Northern Italy onto several sheets of A4 paper. We didn’t know how long we’d take, nor where we’d sleep or what we’d live off, and that’s the reason why we set off from home.

The departure time was ideal for those who aren’t in a rush: at three in the afternoon in Padova’s main square, Prato della Valle. Francesco accompanied us along the first few kilometers and then bid farewell, but only until Courmayeur: although had to do some other things for the next few days, Mont Blanc lured him on. We gained confidence with our unstable loads, Beppe’s sticks crossed, forming funny x-shaped flag poles, while his long ice axe was a dangerous rostrum for cars that dared get too close. After a few kilometers my luggage carrier broke loose but Beppe repaired it impeccably, so much so that even today it’s still perfect. We pedaled our way to Lake Garda, ate some ice cream as the evening buzzed with foreign tourists. We then looked for a shore, hidden from sight, where we cooked some pasta and had a propitiatory swim. We didn’t need much: some alcohol to cook with and two trees to sleep beneath. Claudio and I tested the hammocks while Beppe lay down on the mat: in case of rain, with a flysheet over our heads it would have transformed into a tactical three-story building.

We were light, a bit fragile, but versatile and quick, happy that he didn’t have anything to do but cycle. The Po plain flowed past beneath our pedals, and only the tarmac, fiery in the midday sun, stopped us for a few hours at around lunch time. While the sun beat mercilessly onto the facade of Milan’s cathedral, we got off our bikes in the middle of the square, satisfied with ourselves, like we were living our dream. It seemed impossible to us that we’d set off from Padua only the day before. We left the city at sunset, the darkness and the bridges over Ticino hid the world from us, but not the stars.

We began to get closer to the mountains on day three and from the rice paddies the backdrop seemed gigantic and imperturbable. The ascent began and we no longer measured our route with only a Speedometer, but with the glance down the valleys and along the mountain ridges. The only stop-off at a mechanic forced Beppe to change a tire, but we had luck and good weather on our side. Valle d'Aosta welcomed us, but she was no walk-over: our legs felt it as our average speed dropped drastically. In the evening, before seeking rest next to the Dora Baltea, we took a turn and headed into the center of Aosta, hauling our bikes down the cobble streets, observing shop windows and people while they curiously examined us and our strange loads.

The forecast wasn’t bad, but the weather was set to improve even more a few days later: we decide to take our time... but this certainly didn’t mean we’d rest! The next morning we laboriously made our way up Valsavaranche and then continued on foot, ignoring our screaming legs, to Rifugio Vittorio Emanuele. We found ourselves in the midst of mountaineers, people who perhaps spoke different languages, but shared the same excitement. It felt strange to be with so many others, to have a bed to sleep on after having spent days with strangers, hiding from civilization. The next day we reached the summit, happy with out first 4000m peak. Gran Paradiso! What a great paradise! We enjoyed a beer at the hut and celebrated, laughing excitedly as we thought about what still lay ahead. That same day we returned to our bikes, glided quickly down to Aosta and, at dusk, we hauled our way up the last ascent to Courmayeur where Francesco and his tent awaited us. We felt our bodies fall to bits but the new company and the proximity to our goal filled us with courage.

Sleeping in a hammock at Courmayeur wasn’t quite as comfortable as sleeping on the shores of Lake Garda, but nevertheless we woke up in a good mood, because today was a rest day. While sorting out the gear and stocking up on food we continually massaged our muscles, in the hope that this would quicken our recovery. When we sat on the saddle and head off to Val Veny our legs insulted us. receive a resounding insult by our legs. Francesco went on ahead by bus while we stopped off briefly at the Notre Dame de Guérison shrine. Our hearts felt its mystery, helped by our eyes that darted between the crevasses on the Brenva …

At La Visaille we got off our bikes with the strange feeling that they wouldn’t be needed any more… at least, not to climb upwards! We tried to eat as much as possible while pitching our tents and hammocks, while remove spare inner tubes, wires and pliers from our ruckssacks: as of tomorrow, we’d be normal mountaineers again. Beppe knew his body well, didn’t trust how tired he felt and doubted whether he’d manage to reach the summit of Mont Blanc; nevertheless he decided to accompany us to Rifugio Gonella, wedged between the ice and the rocks of this wild corner of Mont Blanc. Since you never know what might happen, we decided to take two half ropes with us. After locking our bikes set off towards the Miage glacier and looked at the scale of its vastness in disbelief, accustomed as we were to our Dolomites, where we had learned to feel at home. Here we felt small, were awed by the grandeur of nature. It all seemed more austere, almost hostile, or perhaps full of dangers that we couldn’t fully comprehend.

Gonella Refuge was new, clean and welcoming. We felt well there but, before finally entering into its warmth, we cooked our soup on our alcohol stove to, observing the sun setting on the mountain tops while it triggered last volleys of rock and ice. I’d already heard a phrase that even now always makes me smile: "If you have never set your alarm before midnight... you've never climbed Mont Blanc."

For all four of us the next day marked our first alarm on Mont Blanc: Beppe had breakfast with us, gave us a hug with his dreary eyes and then went back to sleep. The three of us departed, together with some other climbers, and we set off into the darkness of the glacier. We followed the traces left by the crampons of those who preceded us, following our intuition and the mental picture we’d made by examining the maps and reading some route information here and there. We were thinking clearly, focused on our bodies, trying to make each movement as efficient as possible. At first light we reached the ridge where the normal Italian and French routes meet. No longer alone, we joined the row of many small human beings that had made their way up the French side of the mountains. Francesco decided to call it a day at Capanna Vallot. We were sad to see him enter, but heartened by the fact that there were many other climbers around.

There were only two of us: Gava and I looked at the clock, and decided on a cut-off time to reach the summit and not leave our friend for too long at altitude. We flung off our fear of failure, our worries that our bodies would suddenly say “that’s enough", and climbed as fast as possible. Breathing became heavy, but our legs continued to resist: an hour later we were on the summit plateau, just a few more meters separated us from the summit. We look at the rounded profile of the horizon and saw, in our minds, Padua, our starting point. We hugged each other and the excitement burst from within. An animal-like scream came out from somewhere close to the abdomen: the brain didn’t tell it to do so, cannot understand what it’s all about. A tear in the eye froze the sun, still low, and immediately it was time to return. Walking, fatigue, cycling ... but this time it was downhill all the way to Aosta. We celebrated with a pizza and took the train back to civilization, without accelerating.

We only have a rough idea of how hard that week was: we covered more than 550km and 8000m of height gain and loss, an infinite number of ups, downs and different horizons: we’re not interested in the precise number. Having said that, we easily realize what this adventure has given us: we expelled toxins and breathed all the air in Northern Italy, we explored the limits of our bodies and felt the invisible strength of friendship, while drugging our bodies with endorphins and our minds with smiles and dreams.