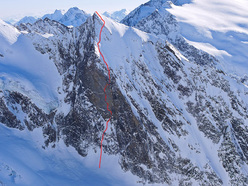 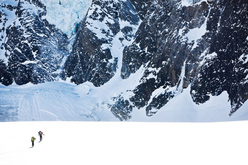 Hansjörg Auer, new route The Music of Chance on Kirchkogel in Austria

Over a 5 day period from 28 February to 20 March Austrian alpinist Hansjörg Auer established The Music of Chance up the hitherto unclimbed Kristallwand on the Kirchkogel (3280m), high up in Austria's Ötztal Alps. Auer carried out the first ascent together with his brothers Vitus and Matthias, Ben Lepsant, Elias Holzknecht and Berti Gleirscher and after first attempting with a portaledge, they subsequently decided to return to valley after each day and ascend to the previous highpoint using the fixes ropes.

Hansjörg led all the pitches and initial mixed climbing led to the overhanging rock face, which was breached with difficulties up to 6c and A3 aid before finishing up the 200m snow slope to the summit. This new climb up the Kristallwand - the Crystal Wall - is the first line up this 500m high wall which, interestingly, was attempted 60 years ago by legendary Austrian climber Hermann Buhl who was forced to abadon his attempt after the second pitch.


Hansjörg, why this face?
I first discovered this 10 years ago with Thomas Scheiber but I'd never returned. Last winter my brother and I traversed across all the ridges in this valley and it was then that I saw the face again... and the idea was born.

The mountain is in your backyard so to speak. How exposed did it feel?
To get to the route you need to walk for 2 hours from the ski resort Obergurgl, and this is one of the reasons why very few know about this face. You never see anyone there in winter and at one point a helicopter flew over us because they had seen our tracks in the snow. A part of the glacier had collapsed and they feared something had happened. There's no mobile phone reception, so it's clear that you need to be autonomous.

You climbed the route in winter
Yes, and I wanted to finish before 21 March, the official end of winter. What's important though isn't the date, but the fact that I felt it was safer in winter. I reckon the upper section might be pretty dangerous in summer, with loose blocks of rock which resulted in the large flake breaking off.

And your fall...
Yes, the massive flake detached and in ripped all my gear. I was held by the belay, thank God this was equipped with bolts.

Tell us about the weather conditions
They were generally good, just the beginning started badly. Apart from the mixed pitches, I always ascended with climbing shoes. It was never too cold, but due to the orientation the face only receives the sun early in the morning. The weather was worst on our summit day: -10°C down in the valley and 40cm fresh snow. In those conditions, the pitch after the overhang was really wild.

You described this as one of your biggest adventures in recent times. Tell us about your concept of adventure.
I don't have a particular concept, it's just that I go through stages when I'm particularly "driven" by one thing or other. This time I was after an adventure which had ingredients such as the cold, perseverance, remoteness, exploration of personal limits. I'd just come back from Patagonia so I was in the right frame of mind for some suffering and this is obviously really important in alpinism. Maybe another reason why I felt the adventure was so big was because the rock quality was really bad.

This face hadn't been breached before
Yes, there aren't too many faces in the Alps which have never been climbed before and this made things interesting. Furthermore, as I climbed it was always in the back of my mind that Buhl had tried this face and I was interested in finding out what I'd come across and I never remotely imaged that the face would be so overhanging.

What springs to mind when you thing of Herman Buhl?
Suffering. A visionary. Ambitious. Ahead of his time. Many envious of him. A standing bivy on Nanga Parbat at 8000m. A solo ascent of Piz Badile. And his almost 60m fall on Schmuckkamin in the Wilder Kaiser... When I was a young boy I received his book at Christmans and I think I read it three times. Herman Buhl is a role model for me.