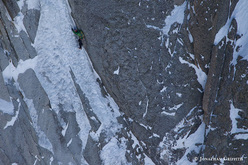 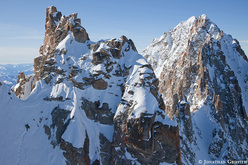 On 19 January Swissman Ueli Steck was up to his old tricks once again, climbing the classic Ginat route on the North Face of Les Droites (4001m) in a mere two hours and eight minutes. This is an absolutely gob-smacking time for these 1000m high above Chamonix climbed by "the fastest man in the Alps" who had set off "to have fun" and who was, according to the man himself, not fully acclimatised... A video of his ascent has been published recently on the internet and we've backed this up with a mini interview.


Ueli, what does this mountain face represent to you?
I've always been fascinated by the history of alpinism and I often think about how things were in the past. The north Face of the Droites is an important milestone in the history of mountaineering and after the first ascent the route has never lost its attraction, the repeats have always been outstanding for the era in which they were carried out. Then came the solo ascent by Reinhold Messner and this was followed by the record set by Cristophe Profit. For me the Droites have always been high on my wish-list of things to do.

Which explains your January ascent
Yes, this year I'm taking some time to climb in the Alps. Obviously the Droites are there, a face which simply has to be climbed.

Tell us about the speed ascent
Setting a speed record wasn't in the forefront, I simply wanted to solo the mountain and the experience of doing something like this is always gigantic and unique. In doing so I climbed with a good safety margin, so not in the same style as when I climbed the Eiger, Matterhorn and Grandes Jorasses.

Some of the world's best alpinists have told us that these ascents are something from a different planet...
Speed ascents are a thing of the past for me. The risks are too high to be able to repeat them again and again. It's Murphy's law, sooner or later something has to go wrong. But the way in which I climbed up Les Droites I managed to contain the risks, I know my own ability well and I climbed as safely as a roped up team. It's clear, I was climbing without a rope, but the technical difficulties on a classic mountain face like this are fairly moderate. And it's exactly that type of terrain which renders the climbing here extremely fun. You manage to proceed very quickly indeed, you never need to stop. It was a superb experience for me, something which really motivated me.

Motivation is a key word.
Yes, after my ascent of Makalu (summited 24/09/2009, editor's note) I had to stop, I was burnt out mentally. In addition in autumn I had problems related to frostbite on my feet, and this still continues. At present climbing an ice route is torture, my feet freeze immediately and it's very painful. But climbing up the Droites was no problem whatsoever - I was always on the move.

On a perfect route
Route conditions weren't perfect but not that bad either, If the route is in good conditions it's a line of all, near the top I had to climb a pure rock pitch and just beneath the summit I had deep powder snow. But it's this which renders alpinism interesting, isn't it?