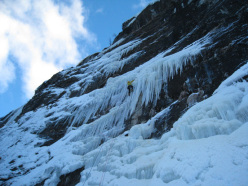 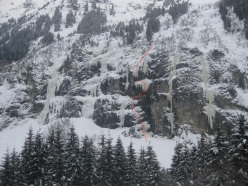 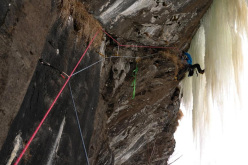 When three expert Austrian alpinists tie in to the same rope it's clear that something special might take place. And this is exactly what happened to Sepp Inhöger and Hans Zlöbl, two undisputed pioneers of ice climbing in Austria's Gastein area, and the highly talented Thomas Bubendorfer. Towards the end of the '80's and at the start of the '90's these three climbed an outstanding array of routes and while Bubendorfer specialised in audacious free solos (the Heckmaier route up the North Face of the Eiger in a mere 4:50 in 1983, to name but one of his many ascents), Inhöger and Zlöbl concentrated their efforts on the Gasteinertal where they made the first ascent of one icefall after the next, contributing significantly in rendering this one of the premier ice climbing areas in Europe. In January 2012 this trio teamed up to establish two difficult new icefalls in the valley which they'd been keeping an eye on for over a decade. But at this point, it's best to let Hans Zlöbl take over and tell us how things unfolded.


THE USUAL SUSPECTS by Hans Zlöbl

When all routes have been climbed, what remains for the next generations? This was the question a journalist asked me more than 10 years ago. The doubt was perfectly justified after a period of intensive exploration and first ascents in the valley. All the big ice falls had been climbed! But for me this question never sprung to mind in the first place, I believed and still believe in the creativity and power of the younger generations. And of course, there where still unclimbed falls, unclimbed lines and routes that I couldn’t even imagine climbable at that time. Yes, there were some incredible lines hidden in the back of my mind but after more than 10 years I never thought I’d climb them by myself.

Albert Leichtfried and Benedict Burner were the first to do so, revealing one of my big valley secrets.  With their Centrecourt the duo established an incredible line, and I fully congratulate Albert and Benedict for this success. The route was repeated several times in the 2010 season, the year of its first ascent, while the nearby “Land Under” lay unrepeated for  almost 12 years. A big route, which must not be underestimated (Editor’s note: established by Zlöbl and Gernot Lachmaier in 1998, Land Under is still one of the hardest routes in the valley and was repeated for the first time last week by Austrian Mountain Guide Markus Pucher in 7 hours.)

Last winter a  long spell of excellent ice conditions resulted in a series of lines forming which had been deeply buried in my mind. An inner restlessness caught hold of me and I got my ice gear, ready to tackle new terrain. It was then that my friend Thomas Bubendorfer came up with the project, too. Sepp Inhöger, a main player during the initial development of the valley, joined the team and we successfully climbed the Triple A up the Alraunewand. I almost couldn’t believe I was one of the first to climb this line and it was certainly the result of a “Triple A” friendship.

Activity up the Alraunewand wasn’t unnoticed and the question was asked about who the hell had climbed that terrain. A fortnight later things got even crazier. The same suspects were observed as they climbed up the same face, this time slightly further to the left, up the last remaining line. The Usual Suspects offers state of the art winter climbing and is a new valley benchmark. The route is very demanding and varies considerably, from thin fragile ice mushrooms to big overhanging mixed and aid climbing. It was established ground-up and some aid climbing was necessary to place pitons and trad gear: three bolts were placed on the belays and some but weak pitons are in-situ in the big roof. The Usual Suspects hasn’t been freed yet and it’s an open project for anyone interested. Maybe one of the ultimate challenges in the valley, if and when the route forms again.

PlanetMountain has often been our source of information for enjoyable new routes, especially in the Dolomites. So this time round we’re happy that it’s us who’s providing the community with information.

Have fun, Hans and friends.