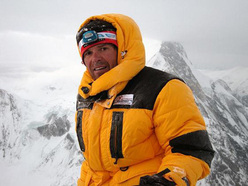 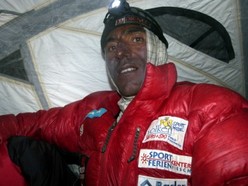 The search operation has been called off for the alpinists Gerfried Göschl, Cedric Hählen and Nisar Hussain who went missing on Gasherbrum I on 09/03/2012.

It has ended in the worst possible way, the attempt by Gerfried Göschl from Austria, Cedric Hählen from Switzerland and Nisar Hussain from Pakistan to establish a new route, in winter, up the South Face of Gasherbrum I. The three alpinists were last seen on Friday 9 March, the day of the historic first winter ascent carried out by a Polish expedition who saw the mountaineers circa 250m from the summit. Since then there has been no news of their whereabouts and the mountain was engulfed in a storm which prohibited the Poles Artur Hajzer and Agnieszka Bielecka from climbing back up the mountain to attempt a rescue.

The search operations have been called off and the President of the Pakistan Alpine Club, Colonel Manzoor Ahmed, told AFP "Army helicopters made another attempt at the 8 048 metre peak on Thursday when weather improved, but they did not spot anyone" adding "Unfortunately there is no hope left now as they cannot stay there for such a long time so the search has been called off."

Gerfried Göschl was born in 1972 and had climbed, amongst others, Cho Oyu, Gasherbrum II, Shisha Pangma, Everest, Broad Peak and Nanga Parbat via a new route. Cedric Hählen was thirty years old and had ascended K2, Gasherbrum II, il Broad Peak and Kangchenjunga. 32-year-old Nisar Hussain was widely considered one of Pakistan's strongest High Altitude Porters and he had ascended all five 8000m peaks located in Pakistan, for a (record) total 10 times.