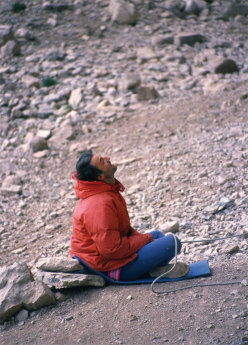 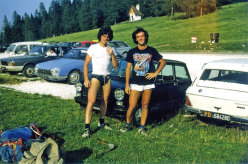 Gigi Dal Pozzo (right) with Sandro Neri at Passo Duran in the Dolomites (1983).
Photo by Marampon

Luigi 'Gigi' Dal Pozzo passed away on Monday 10 December 2012 after a long illness. A leading climber and alpinist from the Belluno area of Northern Italy, Gigi Dal Pozzo played a fundamental role in the evolution of climbing in the Dolomites. Sandro Neri remembers the climber.

Gigi Dal Pozzo... For those who at the end of the '70's and the '80's were lucky enough to rock climb, this name suffices to open up an entire new world. The same world and the same love which in those years revolutionised climbing in both the Dolomites and further afield, too. Born in 1956 in Italy's Belluno region, Luigi "Gigi" Dal Pozzo was an extremely talented climber and alpinist, a leading light of the "new form" of climbing which began to take hold in NE Italy. Along with an elite group of strong climbers Dal Pozzo played a fundamental role not only in exploring new difficulties but also in developing the "concept" of climbing. What distinguished his climbs was above all a rigorous coherence in his search for beauty which always came hand in hand with hardest difficulties. His route, more than a hundred of them, weave their way up the hidden slabs and folds of the Marmarole, the Pale di San Martino, Agner, Civetta and many other rock faces, unknown to most. They are all beautiful and demanding climbs, extremely severe and forged using rigorous first ascent ethics - those who have repeated, or attempted first repeats, know this all too well. Dal Pozzo's routes are all absolute reference outings that can only be climbed and won over with a totalising love, also thanks to their almost reluctant, shy nature which makes them shun the limelight. In short they resemble - and it could not be any different - their first ascentionist, as is apparent from the words of Sandro Neri.

"Shut up, Cheeta" : dear Gigi, it's almost as if I can hear you up there, as you ask me to remain silent, to not write anything about you, you who's just left us. You nicknamed me after Tarzan's chimpanzee, ever since you practically took me by the hand 33 years ago and guided me into the mountains with Nanni de Biasi. Sometimes you reached the crag at breakneck speed with your bashed up motorbike; you climbed incredible traverses as early as 1979, when you returned from the Verdon Gorge with a certain Manolo... introducing the first EB Supergrattòn climbing shoes (tight and extremely painful) to our Belluno region.

You left us the other night, after a constant, three-year battle against illness, your hardest climb of all. You applied the same grit and dignity which you poured into forty years of great alpinism to your silent and composed battle, where you gave it your all, as always. You even managed to smile and joke about your illness, constantly maintaining that vein of sagaciousness and sense of unique paradox which was exclusively yours.

This certainly isn't the right moment to explain in detail how many dozens of routes you established in the Dolomites, how difficult they were and how little is known about them: Mt. Civetta's numerous faces, Agnèr, Mùlaz, on these and on plenty of other rock faces you left traces of your passing, creative and light just like you. And those who survived that first impact with your rough and prickly outer discovered an extraordinarily sensitive man, capable of feeling moved for a dog abandoned in the mountains.

If it's true that climbing is an art, then Gigi old boy, your routes in the mountains and the at the crags are a true fortune for today's young climbers: if they want to repeat the mountain climbs they'd better train hard and make sure they've got plenty of guts; and to understand your sporting elegance, just go and climb at one of the numerous crags you developed, such as Podenzoi.

A final, brief thought goes out to all the loved ones you leave behind, and to your partner Tatiana who followed you right to the bitter end with a love which was nothing but unique. I'll shut up at this point, because the lump in my throat is simply too big... and Gigi, I'll do what you tell me: "Shut up, Cheeta."