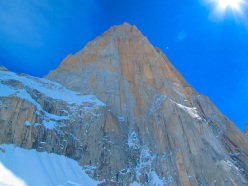 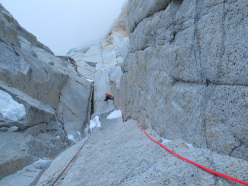 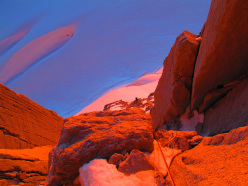 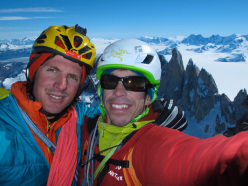 On the East Face of Fitz Roy in Patagonia Switzerland’s Michael Lerjen-Demjen and Argentina’s Jorge Ackermann have made the first ascent, in alpine style, of Un Mar de Suenos (1200m, 7a, A3, M4).

After an attempt in winter – a moment which the two alpinists Michael Lerjen-Demjen and Jorge Ackermann describe as "one of the most important experiences of our lives" – from 14 to 16 November the Swiss-Argentine team managed to forge a new route up the East Face of Fitz Roy. 28 new pitches, which then joined the final 6 of the Ferrari route (Casimiro Ferrari and Vittorio Mele, 1976), established in alpine style, with two bivies, without fixed ropes and without a single bolt, for what has become Un Mar de Suenos, a sea of dreams. Or put in other words, an important new route, both beautiful and difficult and established using a rigorous first ascent ethic, which marks the official start to the new season in Patagonia.

There are few moments in life when everything is right, when you can give all you've got and everything is on your side, when you can achieve great things, when you can make your dreams come true! But with this route we achieved just this! We gave everything we had and even a little bit more, tried and failed, learnt and made progress, but in doing so we never forgot our ethics. We overcame our fears, believed in ourselves, worked in harmony, as a team, helped one another, battled and laughed, froze and sweat! Experienced both the summer and winter, invested every free moment into this line! Un mar de suenos, a sea of dreams, a perfect name for an important dream which has come true. A sea of rock on which we forged our own line, and a dream that drove us ever upwards!

As we stood on the summit and tears ran down our cheeks, there were no spectators, no cameras, just our team, 2 guys who had given everything! And here too our sport differs from so many others, because at this point there is no time for joy, no, you're only half way, half successful, there's only a brief moment before concentration is required. The descent down an unrepeated route cost energy once again and when after 24 hours on the trot you're finally back down, you immediately think about packing your gear and descending. And once this is down the walk back to civilisation takes 4 hours and when you're finally there, you're simply too tired to celebrate because you've been going for 36 hours non-stop. And yet it is this which renders mountaineering so unique, so fascinating, so incredibly honest! All this has to be explained beforehand, as it is as much a part of alpinism as the technical difficulties of a route.

As we set off on our third trip to this face we knew it would be be the last, but unfortunately things didn't kick off that well! We reached Passo Superior where we had stashed our ropes in winter but unfortunately they were no longer there, nor were the hammer and much-needed pegs. Above us the route was white as snow and as our motivation gave way to despair we descended! We even toyed with the thought of giving up altogether, but then we pulled ourselves together to give it one last shot.

On Tuesday the 13th November we ascended to Passo Superior, our last chance this year and should things not work out as planned, then it simply wasn't to be. We reached the col once again and slept for half a day, we were calm and we both lost in our own thoughts. When the alarm rang at 3:00 am on 14 November everything seemed easy, despite the hard section we managed to quickly climb the lower section and we reached the start of the crux pitches half an hour ahead of schedule. Momentum was on our side and it seemed as if everything fit into place automatically, it was difficult but this time we succeeded and reached the Ledge of Hope after 12 hours of climbing. The difference compared to winter was enormous and we were even able to free climb some sections. It is worth noting that it had snowed and it had been windy, that no other team was out climbing that day and that no other route would have been feasible. The wind guested over our heads at 100 km/h but while it was cold, where we were it was windstill. We settled down on the narrow ledge and fell half-asleep at 10.00, hanging off our harnesses.

November 15 greeted us with another early start at 8.00am, from this point onwards we would be ascending unclimbed terrain and it would prove anything but easy! After some difficult aid climbing and a pendulum we managed to continue and then, lo and behold, even though it was steep we were now able to make more progress. We reached our second bivy at 10:00 and as we fell asleep at 1:00 am there was a touch of euphoria in the air! But we also knew that the summit was still a long way off, that the descent was even longer and that the weather would deteriorate on the 17th.

On November 16th, our third day, we were on the move at 6:00 am, the face eased off slightly and we gained height quickly until after a few pitches we joined the Ferrari route. This seemed the only logical way up but it was at this point that we made our only mistake: we underestimated the difficulty of these final meters. We left everything behind and decided to rappel down the Ferrari route, despite knowing full well that this had never been repeated before. So we got continued up with only minimum gear but as it soon turned out, these pitches were far from easy and we had to dig deep to ascend the only six pitches on the whole route which had ever been climbed before. On the 6th pitch Ferrari had broken off to the right, we however hedged our bets and climbed thin ice and some tricky mixed terrain to the left, and were rewarded for having taken this risk: at 16 Nov 2012 at 17:30 Lerjen Michael and Jorge Ackermann stood on the summit of Fitz Roy. After a short rest we immediately began our descent. The Ferrari route is the complete opposite of ours, there were old ropes and pegs everywhere, but we're not going to complain because at least this helped us to orientate ourselves. We established all our belays and used old roped and pegs to safely reach the ground after 40 abseils! Time had flown by and after exactly 24 hours, at 6:00 am on 17 November, we reached our gear at the base of the route

We had climbed 28 new pitches, made the first repeat of 6 pitches of an unrepeated route, were the first team to have established a new route in pure alpine style on the East Face of Fitz Roy, without placing a single bolt! We left only our dream! A route which contains 6 nuts on the lower section and 3 on the upper section for the pendulums! We left no traces and this had been our objective, to climb a route in pure style, clean and beautiful! Back at Passo Superior we packed our gear and reached El Chalten, after 32 hours on the go!

Route Infos:
- The route was climbed alpine style, despite various attempts no peg nor nut were left behind on previous attempts, every attempt started annew and offered the same conditions as the first time
- No bolts were placed!
- The climbers swung leads
- Length: circa 1200m, 28 new pitches + 6 pitches up the Ferrari route
- Grade: 7a, A3, M4 Runnout
- Dates:: 14-17 November 2012
-Team: Jorge Ackermann 26, Bariloche, Argentinia, Michi Lerjen, 27, Zermatt, Switzerland