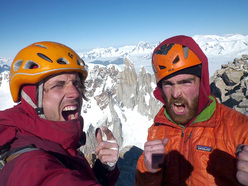 Nicolas Favresse and Sean Villanueva on the summit of Fitz Roy (Patagonia) after having climbed the East Face. Cerro Torre can be seen in the background.
Photo by Favresse & Villanueva 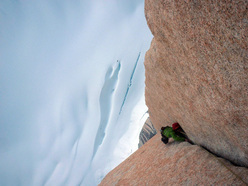 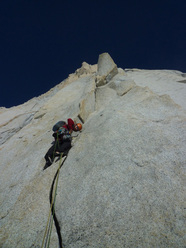 Interview with Belgian climbers Nicolas Favresse and Sean Villanueva after their on-sight ascent up the East Face of Fitz Roy, Patagonia.

"We just had another super nice window of good weather in Patagonia and have managed to climb Fitz Roy for our first time... via its East Face. 1350m of perfect crack climbing." This is how Nicolas Favresse initially introduced the latest climb carried out on 19 and 20 February 2011 together with Sean Villanueva in Patagonia, after Villanueva's first free ascent of Golden Eagle.along with Martinez and Percivati.
The two Belgians climbed fast and light, even throughout the night to enchain Fitz Roy's East Pillar (Casimiro Ferrari, Vittorio Meles, February 1976) with El Corazon (Kaspar Ochsner, Michal Pitelka February 1992). Since their ascent - more than 1000m up to 7b all climbed on-sight - has been hailed by insiders as one of the most impressive ascents this season, details from the climbers themselves simply couldn't go amiss!

Nico, tell us about the climb
Sean and I both freed the route El Corazon on Fitz Roy in Patagonia, with a variation to avoid the A4 crux pitch. The start of El Corazon and Royal Flush were wet so we had to find an alternative and the East Pillar route leads to the same ledge and was dry. Higher up Royal Flush was still wet and El Corazon looked amazing, so from the ledge we climbed El Corazon to a pitch before the A4 pitch. From a free climbing perspective it looked easier and more logical to traverse into the crack lines left which is Royal Flush, and from here Royal Flush joins El Corazon after a few pitches. It's very sustained in the 5.10/5.11 range while the 3 hardest pitches are around 5.12-, all perfect cracks, nothing super extreme. All in all its an amazing line with incredible cracks up a beautiful piece of rock. Major!

So how did you go about it?
We climbed alpine style without jumars, switching leads, hauling a little bag on the harder pitches, climbing non-stop except for a short pause in order to melt snow and make some soup in the middle of the night. We started climbing at about 7am and stood at the top at about 10h30 the next morning. Five years ago when I went to Patagonia the first time I was really inspired by Tommy Caldwell, Topher Donahue and Eric Roed who freed "Linea di Eleganza" in a massive push. So it felt pretty amazing to have a similar successful experience on this face.

Sean, how much higher - or harder - do you think you could have gone?
Much higher and harder but only with the same weather. These things can depend on very small things, for example a single boulder problem, or a delicate pitch which is hard to protect could have made all the difference. We’ve definitely had more epic attempts and ascents in Patagonia but this one went really smoothly due to the good weather conditions. Since we on-sighted every pitch there is clearly room for harder.

Much of the climbing was done by night.
We didn’t bring any bivy gear so our strategy was to keep climbing to keep warm. Fortunately it was easy to stay in the line so the darkness wasn’t too much of a problem. The darkness definitely adds some spice and question marks to the climbing. But we were blessed with a full moon, which really made the night magical.

Why do you think this obvious linkup hadn't been done before?
Most people just want to go to the summit of Fitz Roy, so they tend to all go to the same routes. Probably the A4 pitch on El Corazon scared people. This variation could become a classic up the East Face of Fitz Roy. It tends to be in better condition than Royal Flush, which is often wet.

You came across some in-situ gear
Yes, there were steel ladders were on the East Pillar, hundreds of meters of them. The route had attempted throughout the 70’s by various parties and steel ladders were placed. It’s a real mess and it was not enjoyable to climb around them, so we tried to remove the steel cables but you would need cutters to slice through them. Nico got a small cut in his thumb while trying to remove them and 24 hours later it got badly infected and swollen. Times have changed and they really need to be removed! It would be a brave mission!

Nico, what about Royal Flush, those legendary 44 pitches graded 7c/A2 and first ascended by Kurt Albert, Bernd Arnold, Jörg Gerschel and Lutz Richter back in 1995? You attempted to free the route a few years ago after your ascent of Riders on the Storm...
Yes, it looks amazing; unfortunately it seems very hard to find it in condition. While rappelling down the Royal Flush we noticed that the top cracks were very icy and the lower ones where like little streams. We tried it together in 2006, then Sean tried it again two more times in 2007 with Mike Lecomte. Also other people who have attempted the line have found it either wet or icy.

Last question: on Baffin you did routes in capsule style, ie sleeping in portaledges and never returning to the ground during the ascent, whereas in Greenland you did one-day pushes. Which direction are you heading in?
We’ve always done one day pushes, also in Patagonia and Baffin. Often our capsule style ascents receive more attention because the grades are higher. We like both styles and it depends on the difficulty of the wall. And the musical inspiration...

Editor's note: for an interesting history of the climb check out Rolando Garibotti's website here