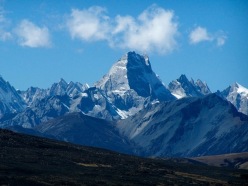 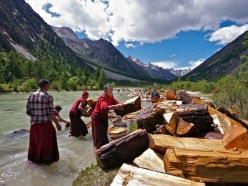 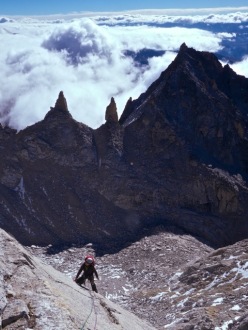 Szu-ting low on route on Kemailong
Photo by David Anderson 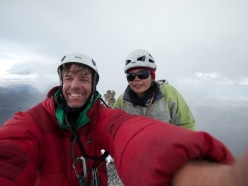 In China's Shaluli Shan mountain range Dave Anderson and Szu-ting Yi have made the first ascent of Kemailong (5870m).

An American/Taiwanese expedition spent a month in the remote Shaluli Shan Range of Western Sichuan, China and came away with a first ascent of the striking granite tower Kemailong 19,259ft. On October 1, 2012, Dave Anderson and Szu-ting Yi climbed the 3,500ft south ridge to the summit and rappelled the east face returning to their high camp in an18 hour round trip push. Anderson and Yi named their route Joining Hands (V, 5.10, M5) for their combined logistical and climbing skills that allowed them to succeed in the Shaluli Shan Mountains.

This was American Dave Anderson’s third expedition to the Shaluli Shan in the last six years. In October 2006, he and Canadian Sarah Heuniken completed the first ascent of Sachun 18,753ft, a “Patagonia-like” spire, via “Dang Ba ’Dren Pa” (5.10+ A0 M5 70°). Last year he returned in September with American Eric Salazar and Taiwanese Szu-ting Yi and climbed the West Ridge (IV, 5.7, 60°) of the unclimbed peak Crown Mountain 18,373ft.

In fall 2012 Anderson and Yi set their sights on climbing Kemailong, located several valleys to the north-east of Mt Genyen 20,354ft, the area’s highest peak. The expedition almost ground to halt in the town of Lamaya when the horse packers discovered Anderson’s and Yi’s climbing equipment. The problem did not evolve around permit issues or the peak being considered sacred, it was about self preservation. In 2006, Charlie Fowler and Christine Boskoff disappeared in the Shaluli Shan Range. Before the bodies of Fowler and Boskoff were discovered in avalanche debris on the slopes of Genyen, the Chinese authorities had imprisoned several of the Lamaya horse packers merely on the suspicion that they had something to with the Americans disappearance. As a result, six years later, the horse packers were still fearful of helping climbers. To resolve the issue, Yi and Anderson wrote, signed and finger printed a “waiver” releasing the horse packers from any responsibility if they failed to return from Kemailong.

During the approach into the mountains, Anderson was amazed at the changes that had taken place to the area in the last six years. New roads and electrical lines now crisscrossed the remote region which had previously been the domain of only nomads and their yaks.

At their base camp below Kemailong, Anderson and Yi were challenged by poor weather to even see a way up the lower section of the peak. Eventually the clouds parted enough for them to piece together a potential approach. Having already spent three weeks above 14,000ft while guiding in the area prior to the climb allowed Anderson and Yi to quickly navigate up a grueling 3,000 ft long boulder field on south side of Kemailong and establish a high camp at 17,060ft.

On October 1, a midnight weather check revealed stars instead of the usual fog and hail. At 7:00 am Anderson and Yi climbed three mixed pitches to gain the saddle on the South ridge of Kemailong. From there the pair ascended moderate fifth class climbing for 900ft up the broad ridge. As the ridge narrowed the climbing became more challenging, but the featured granite kept difficulty just under 5.10 for the next four pitches. The rock continued to improve and the team was able to simul-climb 1,200ft of rock reminiscent of the East Ridge on Wolfs Head in the Cirque of the Towers. More mixed pitches led to a false summit with the true summit being several rope lengths away past a series of rock gendarmes plastered with snow. The final pitch started with a stout overhanging hand crack (5.10) before easing to unprotected face climbing and the summit.

By the time Anderson and Yi summited at 5:00pm, the weather had deteriorated. Gusty winds, hail and electrical discharges zapped the climbers as they scrambled to get off the summit. Their original plan was to descend the south ridge, but with all their metal equipment still humming from the electrical storm, Anderson and Yi decided to quickly bail off the steep, but unknown, 2,300ft east face. The weather continued to worsen with heavy snow compounding the difficulty of finding crack systems to set up rappel anchors. Finally after several stuck ropes and leaving most of their rack during 13 rappels, Anderson and Yi stumbled back to their high camp at 1:00am. The next morning, with the weather still unstable, they headed down to their base camp, packed up and hiked out of the Shaluli Shan Range as the winter season moved in.

“It is an interesting time to be exploring China’s Western Mountains,” Anderson commented. “Presently, the Chinese government is pouring money into Western Sichuan’s infrastructure. Improved roads and new airports have dramatically shortened the approach times. However, even though the physical logistics of accessing these areas have gotten easier, weaving through the bureaucracy, nationalism, social and cultural diversity of China remains challenging.”

The climbers would like to thank Planet Granite, the AAC Lyman Spitzer Cutting Edge Award, Atunas, Patagonia, Evolve and NOLS for making the expedition possible.

2011 - Chasing Ghosts and Dreams along the Tibetan Plateau