► News ► Alpinism ► Ermanno Salvaterra, the Torre traverse and the future of mountaineering in Patagonia
Versione italiana 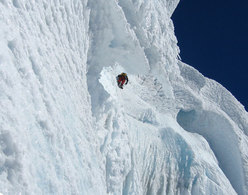 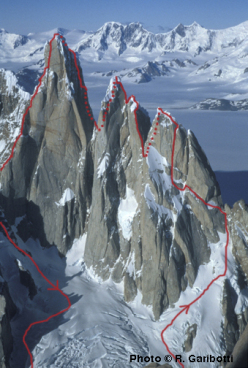 PORTFOLIO / gallery Portfolio: Ermanno Salvaterra, the Torre traverse and the future of mountaineering in Patagonia

Ermanno Salvaterra, the Torre traverse and the future of mountaineering in Patagonia

After Rolando Garibotti and Colin Haley's successful linkup of the Torre traverse (Aguja Standhardt, Punta Herron, Torre Egger and Cerro Torre), Ermanno Salvaterra offers insight into the history and the dream of the traverse and his vision of the future of mountaineering in Patagonia.

"The traverse has been carried out. The great project has finally been completed. Together with Giarolli and Orlandi I was the first to attempt this project almost twenty years ago. It was a different era, perhaps we didn't even have enough experience at the time to try something of this magnitude but we we're simply attracted by the idea of it all.

I remember the hardship, my partner's determination, the days and nights spent in the cold on those faces. I remember Icio climbing ice. The harsh words I received from my partners when I wanted to set off even if the weather promised nothing good. But we set off. And we tried. And then we turned back, thrased, and it was all my fault.

I remember Elio jumaring on Exocet with an unbelievably large rucksack clipped to a rope from above to stop him from tipping backwards. I also remember when Andrea Sarchi was with us once. That extenuating bivvy which lasted for more than 60 hours, sitting down, locked in our tent on the face. I remember that they said "A week after we get home, don't even dream about phoning us for our plans to return in a year's time..."

At that time we didn't know anything about Aguja Standhardt, it had been climbed for the first time just a few years previously. We looked to Punta Herron as if it were some sort of ghost. Giongo had told us briefly about Torre Egger when we met him at his house in Merano. Perhaps we hadn't even discussed Cerro Torre. But we liked the idea. And so we attempted the traverse, and renounced, for three years. Great pleasures and great thrashings.

Together with Adriano Cavallaro and Ferruccio Vidi we climbed Standhardt and Herron in 1991 and it seemed to us as if we living a dream. These memories remain etched in my mind, engraved somewhere in a corner of my memory.
Every now and then as the years ticked by we talked about reattempting the traverse. Some pretended not to hear. A few years ago I suggested it to Giarolli but the answer seemed very vague.

Someone has now lived my great dream. Those who have believed in the project have achieved it, those who knew how to try and try again. It isn't easy to go that far and still have the desire to try again, I know this all too well and I'm sure many know this, too.

One should learn from Rolo, we have to, if we want mountaineering to continue to progress and not just be content with a search for ever-increasing difficulties. We'll see how much time passes before someone will climb the great Slovenian route on the East Face of Cerro Torre, ascended by the incredible climbers Jeglic, Karo and Knez. Or the routes on the Torre south face, or the Egger dihedral, or the great English Dihedral on Cerro Torre's East Face climbed by Burke and Proctor, or the legendary American route by Donini, Bragg and Wilson on Egger's South Face.

Those were different times, the climbers were really tough. It's true, they used fixed ropes, but it was a different era. Now we should climb those great routes in pure alpine style. We'll see what the future holds, but I'd really like to, if not see, at least read about ascents like this."