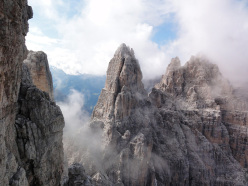 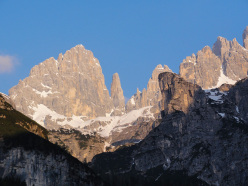 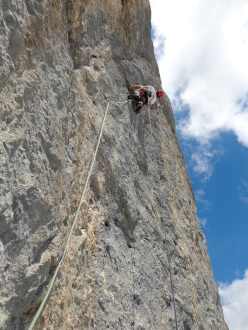 On the Tose in Val d'Ambiez
Photo by Alessandro Baù 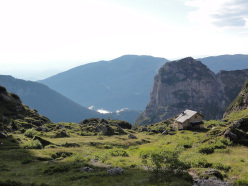 The Brenta Base Camp kicks off from 29 July to 7 August in the Italian Brenta Dolomites, an event that aims to climb three new multi-pitch routes close to the Pedrotti alla Tosa mountain hut. A short interview with the alpinist and man behind the initiative, Alessandro Beber.

Next Tuesday marks the start of the Brenta Base Camp, the initiative that will attempt to establish three new rock climbs up three different peaks in the Brenta Dolomites in one continuous push, almost as if it were a small expedition. The climbs are part of the Discover Brenta Dolomites 2014 event that celebrates the 150th anniversary the first traverse of this massif, and while the camp will be located close to Rifugio Pedrotti alla Tosa in the heart of the Brenta, the routes will be climbed by local mountain guide Alessandro Beber, along with his habitual climbing partner Alexander Baù and Beber's friends and colleagues from the Mountime mountain guides group. The idea, apart from forging something new, is to focus attention on the fact that there's still plenty of adventure to be had in the Alps and our backyard mountains. And, for those who wish to make their way up to the bivouac, to share the experience with the climbers on their return from the day out in the mountains.

Alessandro, where did "Brenta Base Camp" idea come from?

From a long way back I'd say. Ever since I started my DoloMitiche project (a series of reports and video documentaries about alpinism in the Trentino region, ed) back in 2011 I always thought that after having followed in the footsteps of the great climbers of the past, the natural step forward would be for me to take the helm and climb some new routes for myself-

Why the Brenta in particular?
I think it's stimulating to climb in all areas of the Dolomites, also because each group is special in its own way. The Brenta range is truly vast and the rock quality is almost always excellent: from the superb grey limestone in Val d'Ambiez and the Northern Brenta area (the same rock as that in the Rätikon and Wendenstock, so to speak), to the compact and weathered dolomite in the heart of the massif.
Furthermore, this year marks the 150th anniversary of the first alpine explorations within the massif, and we have to thank Molveno Holiday, the Dolomites Paganella tourist board and the Molveno town council for their trust and support of this project which has been inserted into the huge number of events that have been organised this summer to celebrate this particular anniversary.

So what's the underlying message?
There are numerous reasons for such an initiative: first and foremost to prove that 150 years after their "discovery" the Dolomites are still a huge land of adventure for the younger generations. Then I'd like to get the message across that one doesn't necessarily have to go on an expedition to the other side of the world to climb something... The fact that we've got an expedition-style base camp up in the mountains was a deliberate decision, too, so that we can get away from the "hit and run" attitude which is highly popular nowadays. We want to take have all the time we need to savor the alpine experience as a whole, without rush and worries. And in this manner we also want to enjoy the social aspects and human relationships that come together in moments like these in the mountains.

Talking about relationships, who will you share this adventure with?
Well, this is a kind of a sore spot... I've climbed with so many great partners over the years that i'd have wanted to share this project with all of them. But in the end the natural choice was to climb with Alessandro Baù, the person I've shared my most important climbing moments with and with whom I'm in perfect symbiosis, as well as my friends and colleagues from the Mountime Mountain Guides group with whom I share the daily joys and hardships being a guide. I obviously hope to continue with similar projects and therefore involve my other friends who won't be with me now.

So what's the plan?
From 29 July to 7 August we'll be based at Baito of Massodi, on the path that leads from the Selvata hut to Rifugio Pedrotti, and from there we'll set off in search of "our" routes. All those who want to join us, for a chat in the evening or to watch us climb during the day, are more than welcome!

So where will you climb the new routes?
I'd prefer to answer "Top Secret" for good luck, also because there are several unknowns about the lines we'd like to climb, and it's by no means certain that we'll be successful. But should we descend back to valley empty-handed, then that'll be fine, too, as it'll have been a real privilege to be able to spend 10 days with friends up in the most beautiful mountains in the world, doing what we love most. I certainly don't see this as failure!