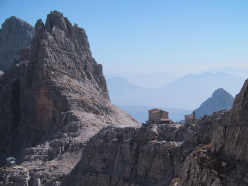 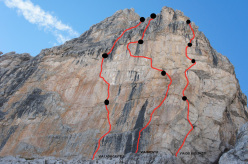 Via Lady Castelli, Via Bregtie and Via dei Violinisti, Brenta Dolomites
Photo by Franco Nicolini 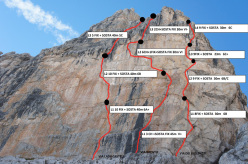 Via Lady Castelli, Via Bregtie and Via dei Violinisti, Brenta Dolomites
Photo by Franco Nicolini

On the North Face of Croz del Rifugio (Brenta Dolomites) Italian Mountain Guide Franco Nicolini has put up two new routes and reequipped the belays of his Via Elena (1988) as well as Via Bregtie, first climbed in 1963 by Cesare Maestri and Ernesto Carafoli.

THE ROCK FACE CLOSE TO HOME
A few years ago I repeated a short but difficult climb established by the great Cesare Maestri up the North Face of Croz del Rifugio in the central Brenta Dolomites. I returned a few years later with my friend Felice Spellini, who unfortunately passed away prematurely, and Claudio Donini and we established a logical, beautiful and difficult crack in a section to the west which we named after Elena, my newly born first daughter.

This year I worked as the hut warden of Rifugio Tosa T. Pedrotti and I often happened to look out of the window and dwell on the obvious lines which run parallel to Cesare Maestri's route, thinking about this featured rock given to us by nature in this little hidden corner of the Brenta Dolomites. And so, when I managed to find time off from work, I established two new routes with my children Elena and Federico and with the help of Davide. These ascend the cracks and corners which run parallel to Maestri's 1963 outing with obvious, logical ease. Given the difficulty of some of the moves, I decided to render these two routes "safer" by placing long-lasting bolts, but also because I wanted to encourage youngsters to repeat these routes which are located in extraordinary surroundings yet close to the mountain hut.

The new gear on the two old routes - Via Bregtie and Fessura Elena - came about after a due consultation with Maestri. The idea was to re-elaborate the route "more freely", reequipping the belays with good bolts and substituting the old, battered pegs with new "Cassin" ones so that the nature of these climbs continued to reflect "times past", perhaps necessitating some additional gear along the pitches but with some safe pro at the belays.

The rock face still holds potential for an infinite number of new routes, but given the altitude and its location one can only climb here during the 3-4 summer months. And it's not excluded that those who come here next summer will find another new route! We've got our sights set on the small crimps located on this marvellous sheet of rock and the "work" is, time permitting, in continuous evolution.

Thanks to Montura, Scarpa, CAMP… no longer my sponsors but trusted "friends"

VIA BREGTIE
Established on 12 September 1963 by Cesare Maestri and Ernesto Carafoli, graded VI. Height: 120m.
After having agreed with Cesare Maestri, I modernised the in-situ gear and substituted all the original pegs with new Cassin pegs and added two bolts to the belays. Bearing in mind the pegs along the pitches, to repeat the route I recommend a selection of mid-sized camming devices (3/4/5). It is worth bearing in mind that the gear is fairly run-out and the route suitable therefore for experienced climbers only. Pitch 1 follows an obvious corner and finished beneath the overhanging bulge, pitch 2 climbs a delicate and pumpy traverse leftwards to reach a crack which breaches the upper section of the face. The final pitch leads to the shoulder of the Via Normale.
Descent: a short abseil south and then follow the track down to the hut.

FESSURA ELENA
Established in September 1988 by Franco Nicolini, Felice Spellini and Claudio Donini, graded VI. Height: 140m
I modernised the in-situ gear on this route, too, by substituting the old pegs and in-situ slings in the threads, and added two bolts to the belays. This route is highly recommended for experienced climbers seeing that the pro is run-out; mid-sized camming devices recommended. Climbing off-route is impossible: follow the obvious, wide chimney crack for four pitches up the extreme left-hand side of the face.
Descent: follow the tracks to reach the path that leads from Cima Daino to Rifugio Tosa.

I VIOLINISTI
Established in August 2012 by Franco Nicolini with Davide Galizzi, entirely bolt protected, freed a few days later by Gabriele Carrara and Elena Nicolini. Height: 130m.
This beautiful climb takes a line up the extreme righthand side of the face via four short pitches. The name refers to the hut's cooks who are also skilled violinists.
the crux sections of the route are located on pitches 3 and 4 with some 6c+ climbing, but most is in the region of 6b and the entire line is obviously protected by bolts. No particular gear is required apart from a normal climbing rack and 10 quickdraws.
Descent: after having crossed the small ledge rightwards, descend down the stepped terrain follow tracks which leads towards Rifugio Tosa.

LADY CASTELLI
Established in August 2012 by Franco Nicolini and Davide Galizzi, entirely bolt protected, freed a few days later by Franco and Federico Nicolini. Height: 130m.
Beautiful climb which chooses the path of least resistance up this vertical face, past small crimps and various pockets. The route name takes after the family nickname of the boss of the mountain hut, my wife Sandra. No particular gear is required apart from a normal climbing rack and 10 quickdraws. Pitch 2 presents the hardest 6b sections but in general the difficulties are in the 6/b region. The route is entirely protected by bolts.