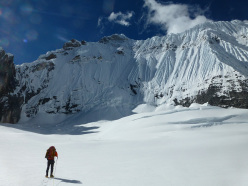 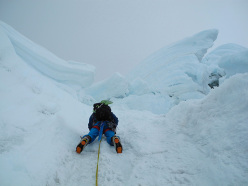 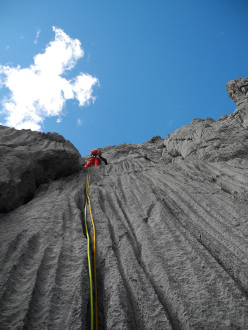 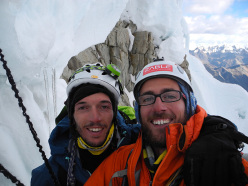 Report by Carlo Cosi on three first ascents in the Cordillera Huayhuash in Peru: Laurpaq and La zuppa di Pio on the untouched NW face of Jurauraju 5330m and La Siesta del Bodacious on the SW face of Jurau.

"My heart is racing, I'm short of breath, my lungs are burning, I'm dizzy and my legs are trembling...It may just be that I'm hanging off a belay which I don't like the look of, that the snow picket I'm tied to is coming out even just looking at it, that my rope is taught and pulling uncomfortably upwards, that I'm holding on with all the strength left in my legs and two "Rottweilers" are gnawing my quads, that it's bloody freezing, that Davide is spread out on his back over his rucksack on a snow ledge above a 20m void, his weight is on my rope and the only thing protecting us is a snow picket 15 metres above me, and he's just fallen...I'm a little uncomfortable to say the least, I'm thinking about home, the sea, that phone call I got three months ago inviting me to take part on this expedition, about these snow pickets, home-made by Davide's dad. I wish I was lying in the sun on some beach drinking gallons of mojitos right now... Davide gets up, he's ok, just an exploded bottle of water in his pack, nothing more. I breathe a sigh of relief and my mind comes back here, to the South Face of the Yerupaia. Davide starts climbing again. He's on a completely vertical wall, the snow is inconsistent, almost powder and we're at 90°, I've never seen anything like it. He climbs another metre above the picket and again the snow gives way under his crampons, he slips but somehow or other he manages to stay up, he puts his weight on the snow picket again. He takes a breath, we're at 5500m, he places another snow picket a metre further up. Same operation, he sets off again, "come on you can do it" I shout to him. Before I even get to the end of the sentence, he's hanging again, now off the second picket. This one held too. Davide's dad, you're the best, I think. Another snow picket. This time it slides in as if through butter, he puts his weight on it and it comes halfway out, he holds it in with his hands and puts his weight on it again. So tenacious and calm, great Davide! You can feel the tension, I'm so focused on belaying, he sets off for the upteenth time but no luck, and again he ends up dangling on the ropes..."

It all started on a classic day of ski-guiding in the Dolomites, March if I'm not mistaken. I was coming back from a day of freeride, one of those days when the snow comes up to your ears, and my phone rang. It was Davide Cassol, a friend I had recently met on one of my jaunts on Mont Blanc. He had great news for me: three of his friends, Tito Arosio, Saro Costa and Luca Vallata were organising an expedition in June to Perù, in the Cordillera Huayuash. Expedition specifications: be young, climb as two separate teams and climb in alpine style. He suggested that I team up with him... I didn't have to think twice about it: Peru in June, first ascents, with people I barely knew?... why not! And that was the exactly how I answered him.

We set off at six in the morning on 26 May from Milan's Linate airport. Laden like mules with rucksacks and huge sacks filled to the brim with boots, ropes and all the necessary gear, the five of us finally met each other. I had seen Luca around a couple of times (most recently on the Marmolada the previous summer whilst he was trying to spread his wings on Specchio di Sara), the other two, Tito and Saro, I had never met before. But that's what's great about mountain adventures is that it's so easy to make friends, sharing the same efforts, the same happiness and pains, and in fact this is exactly what happened.

After a 17-hour flight and 8 hours on a bus we finally reached Huaraz, a city of 120,000 inhabitants at an altitude of 3100m which we had chosen as our starting point. Straightaway we met Vladimiro, our Peruvian contact and all-round organiser of the bureaucratic side of the expedition, who introduced us to another very important member of the expedition, Pio Polo, the cook. Over the following days we bought enough food to stay at altitude for a month; with all our technical and culinary equipment we had to enlist the help of nine mules and two horses to transport almost 300kg of gear so we could build a palace at 4300m.

After two days of preparing material and making various purchases, we said goodbye to Vladimiro and we set off on our adventure led by the super cook Pio Polo (who would turn out to be a legend both in and out of the kitchen, great Pio!). 6 hours in a van, with 3 hours on a dirt track, we got to Lliamac, a village at 3300m in the middle of nowhere. Here we retrieved the mules, led by Abner and Omar, and we set off on the long approach towards base camp. After three days, two camps (Jauacocha lake 4500m and the Huatiaq plain 4300m), two mountain passes (Llaucha Punta 4850m and Tapush Punta 4770m) and many many kilometres on foot trudging behind the mules and the tireless Pio we finally reached our base camp at 4330m between lake Sarapococha 4482m and lake Juraucocha 4343m. A place which takes your breath away (in all meanings of the phrase)! It was the first of June and we were to stay there until the 22nd when, over three days, we would return to Lliamac and to civilisation.

These were 26 amazingly intense days where toil and adventure held sway. During the initial acclimatisation days at base camp, as well as wandering up and down the valley, the lakes and doing some bouldering, we climbed the Cerro Gran Vista 5152m. The following days were pure adventure and exploration. Davide and I made the first ascents of, in order, "Laurapaq", "La Siesta del Bodacius" and "la Zuppa di Pio".

The first one, "Laurapaq" , is a rock route which climbs the NW face of the Jurauraju 5330m, previously untouched. The rock is truly beautiful with really incredible limestone features. The difficulty is quite limited, it gets to V+ at the most. The idea of being the first ascensionists, and even just being at 5000m on this awesome rock, makes it all so magical. We felt like Gino Soldà in the thirties in the Dolomites, what a dream!

The second route, "La Siesta del Bodacious" is on ice and climbs the SW face of the Jurau 5674m, straight towards the left of the peak as far as the sharp ridge 80m below it, before circumnavigating the ridge and joining up on the other side with the East Ridge, a route first climbed in 1966. On reaching the ridge 80m below the peak and getting to the East Ridge we decided to come descend because of the dangerous nature of the huge cornices precariously balanced above a void. It was a really wise move given that the following day, as we were taking down the tent to return to base camp, we saw a cornice collapse causing a mega avalanche 200m to the left of our new route.

After these two routes and 4 and a half days of bad weather we attempted to forge a new route up the South Face of the Yerupaja Sur 6515m but unfortunately we were cut short at the base by really prohibitive snow conditions, with powder at 90°, I’d never seen anything like it... After Davide’s three falls on a snow picket (homemade by his dad) and 3 hours of attempts to get over the bergschrund we decided to give in and go back, tired, to base camp.

The final days were the hardest (at least for me), given the immense tiredness and motivation had gone into free fall, but Davide managed to convince me to go on another little outing up the mountain and we managed to make the first ascent of a route, "La zuppa di Pio", dedicated to our travel companion/"chef", again on the Jurauraju 5330m. Splendid rock and again with limited difficulty (IV+ max) for lucid dreaming.

Thanks to Zable Sport, Fitwell and Patagonia for providing material, Davide for having hauled me up in the hardest moments of the expeditions, Tito, Saro and Luca for the idea of the expedition, Pio Polo (the super cook), Abner and Omar (los arrieros) for having made things much easier, Essence of Freedom and the San Lucano Boiz, always ready to thrill.