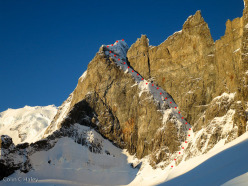 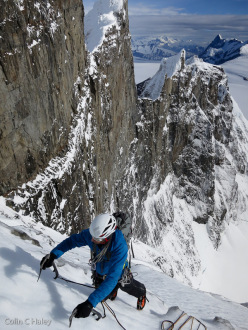 Colin Haley from America and Rolando Garibotti from Argentina have grabbed the first ascent of La SuperWhillans, a striking ramp up the East Face of Cerro Marconi Central in Patagonia.

Haley first caught sight of the "elegant ramp of snow and mixed terrain slashing up the east face" in 2012 and immediately set out to climb it, but became grounded even before starting due to high winds while still on the Marconi glacier with Italy's Andrea Di Donato. In September 2013 a solo attempt resulted in Haley climbing two rope-lengths up the ramp before bailing due to poor ice conditions, but with the climbing season currently being up to its usual tricks - read wet and cold - in mid-December Haley was given another chance.

Teaming up with Patagonian veteran Rolando Garibotti, on 17 December the two traversed in from Paso Marconi and climbed the route on the 18th. Haley described the ascent as "enjoyable and fairly casual, with awesome scenery. Conditions this time were excellent, and with good conditions the route proved to be quite easy." The two breached difficulties up to 70° ice, plus one pitch of AI3/M3 to gain the summit ridge in circa 5 hours, and Garibotti decided not to climb the final 20m between two ice mushrooms due to injury suffered earlier on during the ascent. After spending another 5 hours for the somewhat complicated descent Haley concluded "The climb is fun and aesthetic, and I would definitely recommend it to others, but I think it requires careful evaluation of conditions to make it a nice climb. More than anything else, it is worthwhile simply because the seldom-visited Marconi peaks are wild, beautiful, and much more “alpine” than many of the other mountains around."

It is believed that La SuperWhillans is the first complete ascent of Cerro Marconi Central; the only other known ascent dates back to 1966 when Edgard Köpcke, Avedis Naccachian and Enrique Triep climbed the West Face. While the Argentine climbers got close to the summit mushroom, they did not stand on the summit proper. A day after Haley and Garibotti's ascent Argentine alpinists Iñaki Coussirat and Carlos Molina made the first repeat of the route.

Haley's success comes after having made another first ascent in the same massif earlier this season, namely "El Lobito" (400m, AI4+ M5 A0) up the East Face of Aguja Volonqui together with his partner Sarah Hart from Canada. The two climbed the ice gully on 5 September and descended down the peak's original line, first climbed in 1976 by UK mountaineers Rab Carrington and Alan Rouse who stopped just short of the summit because of unstable snow. Once again this is recommended as a "fun ice and mixed climb."