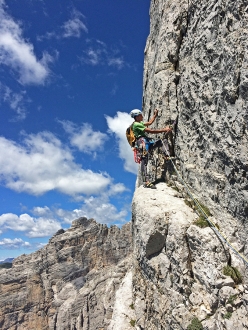 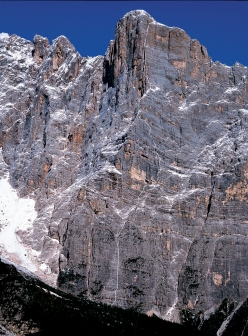 On 17 and 18 July 2016 Manrico Dell'Agnola and Maurizio Giordani climbed a new route up the immense SW Face of Cima Busazza (Civetta group, Dolomites). The 800m climb breaches difficulties up to VII/VII+, includes a short section of A2 aid, and is protected by trad gear and few pegs.

Cima Busazza is definitely one of the most impressive peaks in the Dolomites and, at the same time, perhaps also one of the least famous. Its 1100m high SW face dominates the southern aspect of the Civetta group, rising powerfully even above Torre Trieste, its beautiful and famous neighbor. Speaking of beauty: the enormous west arête of Busazza is second to none. Up it runs the great route established in 1929 by Renzo Videosott, Leo Rittler and Domenico Rudatis, famous for being the first grade VI in Italy. It seems as if the SW Face of Cima Busazza was made to host major outings.

The latest was established a fortnight ago by Manrico Dell'Agnola and Maurizio Giordani, an exceptional partnership, two alpinists and climbers who need no introduction. Dell'Agnola is definitely one of the most expert climbers of the Civetta group, his speed ascents and new routes prove it. Giordani is one of the most active Dolomite climbers with a flurry of new routes on the South Face of Marmolada. It goes without saying that they both have climbed extensively in the Greater Ranges. Their new route now climbs, for about 800 meters, between the route established by Aldo Anghileri, Giuseppe Fumagalli and Vittorio Meles in 1973 and "Luci nella notte”, put up by Dell'Agnola with Ivano Zanetti and Alcide Prati, before finishing up the final 350m of the Videssot-Rittler-Rudatis arête.

Here is what Dell'Agnola wrote us to planetmountain.com about the new climb: "I fully savor the light, refreshing breeze, it's the morning after, I feel fatigue and sense of accomplishment. The wooden beams of my attic make me feel at home, and where better than at home can a warrior rest? Thirty years ago I would have been itching for a new project, but now I'm simply enjoying the moment. 114 years old between the two of us, two long and complicated days on that face, with nearby Torre Trieste that never wanted to get any smaller.The SW Face of Busazza is a huge sheet of rock over 1100m tall, insidious and loose pillars alternate with extremely compact slabs, and only one of the great pillars could host a big route. Many years ago together with Ivano Zanetti and Alcide Prati I made the first ascent of "Luci nella notte" that tackled a line to the left of the initial overhangs. This time I was with Maurizio Giordani, a great alpinists; little gear, no bolts. The idea was to breach the great slabs in the middle of the face, but although we didn’t completely achieve what we’d set out to do, the route nevertheless provided some great adventurous moments. 15 new pitches up pretty good rock, only a few pegs, one short section of A2 aid, the rest with maximum difficulties up to VII/VII+. The finish is as for Spigolo Videsott-Rudatis, and we plan to return."