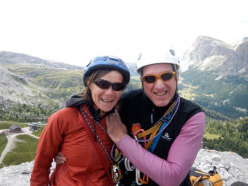 On 12/08/2013 Corrado De Monte, known to all as Icaro, fell to his death while reaching base of Torre Iolanda in Moiazza (Dolomites). Born in Trieste 53 years ago, the Italian alpinist, caver and mountain guide was one of the most popular characters in the climbing and mountaineering world.

A day like many others in the Dolomites. Sunshine and mountains, like many others. Then, four lines from an agency. Few words, the raw facts. As cruel as a wound. Like a punch that leaves you stunned and in disbelief and with a single thought: Icaro is gone. He's flown away forever, while reaching the base of Torre Iolanda in the Moiazza massif with a client. Corrado De Monte, this his full name, was a mountain guide. But for many, nay, for everyone, he was simply Icaro. Someone who was both special and different. Yes, that's what Icaro was. So please forgive us if we're not particularly interested in the hows and whys. Or rather, we simply don't give a damn.

Icaro wasn't merely an alpinist, a climber, a caver, he was a man who like few others before him had transformed his love for the mountains, for adventure and travels into a way of being - and the reference to the famous book by Walter Bonatti is by no means random. Because Icaro was quite unique, above all in sharing his friendship, in considering all as his kin. With Icaro one could talk for hours, about everything. As one of his best friends Paolo Tassi stated "Icaro spoiled us with his friendship, his friends were his Family, and just the sight of him opened our hearts."

I do not know if he was truly happy but he was certainly someone who inspired happiness. He was a globetrotter, a beautiful traveller of the world's mountains, at all latitudes. He was curious about life and every encounter with him was a surprise. Icarus had that gift, slightly magical and mysterious, that all great wanderers have: he could suddenly materialise, almost out of nowhere, in the most unexpected places and it was as is he'd never been away. While having a beer, or in the Piazza in Cortina, in Chamonix or in Arco. Or at the Cinque Torri or in some remote valley of the Himalaya or South America, he appeared as if by magic, and it was always a pleasure.

He was a good and wise man, Icaro was. He was also a survivor, having escaped a terrifying fall in the mountains from which he recovered thanks to his incredible resolve. He was from Trieste, and I mean this in the most beautiful manner, one of those who have the wind raging through their veins and written all over their smiles. We will miss that smile, his quiet strength, his thirst for life.

Bye Icaro, it was a pleasure and honour knowing you.

UPDATE 17/08/2013 - A PARTY FOR ICARO
A party has been organised on 22 August at Sass Dlacia, San Cassiano, Dolomites in honour of Corrado "Icaro" De Monte. Read the details.