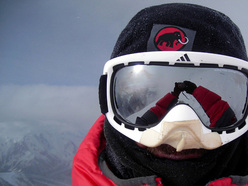 Two photos compared by ExplorersWeb: on the right the shot taken by Stangl, on the left a photo taken from Camp 3 and published in "K2, Dreams & Reality“ by Jim Haberl.
Photo by arch Christian Stangl

Christian Stangl confesses: his K2 summit fruit of the imagination

Christian Stangl, the Austrian alpinist who had claimed the only K2 ascent in this pre-monsoon season, admitted yesterday to not having reached the summit, as had been contested by a part of the mountaineering community.

Christian Stangl's confession is one of those which leaves you speechless. As he himself declared yesterday to the ORF, the Austrian state television, he never summited K2. On the contrary, he simulated the ascent in a "state of coma caused by stress and the fear of failure." The Austrian alpinist and skyrunner had originally claimed to have reached the summit of K2 on 10 August, and first details talked about a 70 hour rush to the summit and back, carried out solo. A great ascent, so it seemed, which made headline news on almost all specialised websites, also because the "supposed" summit had been the only K2 top this season.

This was followed by the first voices of concern and contestation, as well as Stangl's defence. At a certain point though, according to explorersweb, Stangl stated that he had reached the summit but that he no longer wanted to endure the media and mountaineering community massacre, and that he was no longer willing to reply to further questions. All of this happened just a few days ago.

And now, all of a sudden, the "surprise" confession in front of the rolling TV cameras: he had invented the K2 summit... Were it not for other, far more important things in life - such as the absolute flood tragedy in Pakistan which, as it happens, is affecting the country where K2 sits - then one would have to say that this is shocking news. Just as it must be shocking from a human point of view... from that of the man Stangl.

The fact that alpinists lie, just like all men lie, is a well-known truth, and only a few "pure souls" continue to believe in that "purity" and "honesty" which the mountains, better still, bold alpinism guarantees under all circumstances. It has to be said that there is one aspect which differentiates Stangl's story from the rest: as we often write, there are plenty of other shining examples of probable mountaineering lies, but a full-on confession like that of the Austrian is something out of the ordinary. Simply unique. And this, at least, one must acknowledge.

One might consider for a moment his justification, his sort of high altitude trance which made him "dream", imagine the summit so "deliriously" so as to convince himself that it was true and had really happened. We don't want to analyse this further, of course. Even if Reinhold Messner stated on the ORF TV that he believes in this state of "hallucination". What is certain though is that alpinism - above all (but not exclusively) Himalayan mountaineering - is experiencing a deep crisis. It is as if alpinism were stumbling through the clouds, unable to identify a clear aim apart from those "delirious" summits, like that of Stangl.

Perhaps, as Manuel Lugli writes, the solution lies elsewhere. Because "if "serious" and unsuspectable alpinists such as Christian Stangl exaggerate like this, then perhaps Himalayan mountaineering is far sicker than was originally believed. The cure, I think, isn't more meetings and conventions, control and validation agencies nor even tighter reporting. The only way out is to let imagination take flight once again, like many alpinists thankfully are still capable of doing, without stepping into the limelight, without competitions, on new routes, up "minor" summits, in winter and true solo ascents. All the rest is simply chatter and badges."