The arch of Ba-Chikele, Chad
Photo by Camp 4 Collective 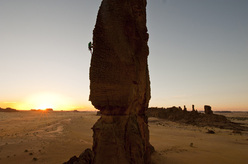 James Pearson on the first route in the Enedi region, Chad
Photo by Camp 4 Collective

The arch of Ba-Chikele, Chad
Photo by Camp 4 Collective 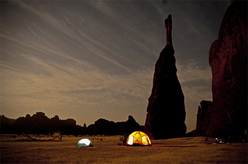 At the end of 2010 James Pearson, Mark Synnott, Renan Ozturk and Alex Honnold established a series of new routes in the Ennedi Range in Chad.

In November 2010 James Pearson from Great Britain, Alex Honnold, Renan Ozturk and Mark Synott from the USA got the chance to explore the Ennedi Range in NE Chad. They came away with a handful of new routes - some of the most memorable and iconic routes of their lives - and the conviction that there are plenty more unclimbed desert towers to be explored. A short report of this "expedition of a lifetime" is published below.


Late 2009 presented me with an opportunity to sign up for a North Face expedition to the Ennedi desert in Chad, led by one of the more experienced members of the team, Mark Synnott.  Mark always had funny stories to tell, I had never been to the Desert before, and these two things alone were enough to convince me to sign up for a journey to the unknown.

Almost one year had passed, and the departure date loomed – I decided it was time to do a little research on the country for an idea of what to expect.  Mark sent me a link to a photo-stream of images from the area which were simply mind-blowing.  Dunes – Tick, Camels – Tick, Unclimbed desert towers as far as the eye could see – Tick!  Things were looking pretty sweet until...

“The overall level of the advice has not changed; we currently advise against all but essential travel to the capital N’Djamena and against all travel to other regions of Chad.  There is an underlying threat from terrorism and kidnapping. Attacks could be indiscriminate, often involving excessive violence."

Reading the above information on the Foreign and Commonwealth office website made me a little nervous to say the least, I had no desire to be kidnapped or killed no matter how incredible the place may look.  I spoke with as many different sources as I could find to try to gather a fair and unbiased idea of the situation within, and came to the conclusion that the official sites were (understandably) playing things safe and the chance of something bad happening was actually rather small.  Still, it was with a certain amount of trepidation that I boarded the plane to N’djamena, joined by a motley crew of Americans.

To cut a long and sandy story short, the trip was one I will remember for a long long time – simply incredible.  After a day in the air, and 3.5 days driving through the sand, we got our first glimpse of an alien world, the most isolated from civilisation I have ever felt.  An un-climbed land!  It was hard to believe, but according to our guide (a climber himself, and one of only a few people guiding in this area, with 40 years desert experience) we were the first group of climbers to visit this place!  There were spindly arches and towers in every direction, a virgin playground of your life’s best FA’s just waiting to be explored – the pictures hadn’t lied.

In the 10 days we spent living in the area we climbed many routes, ranging from easy scrambles up sandy choss, to proud lines of patina toping out perfect towers.  The crew from Camp 4 Collective were by our side the whole time capturing every ascent in glorious, jaw dropping beauty – the video and stills are some of the best I have ever seen.

The situation in Chad was thankfully a lot safer than I had feared, and apart from a few "minor incidents" our time in the country passed with minimal threat of mortal danger.  The nomadic people of the Desert were some of the hardiest people I have ever encountered.  To my ignorant eyes, this barren expanse offered nothing one could survive upon, yet these people somehow forge an existence out there, and seem to do so in relative comfort.  They were usually very friendly and on a few occasions our camp was visited by wandering locals, bearing a gift of warm Camel milk - actually pretty good! What a place...


For more information about the expedition check out the print magazines as well as NeverStopExploring.com