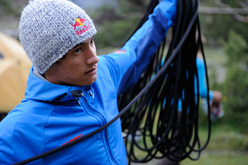 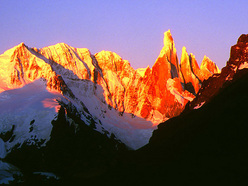 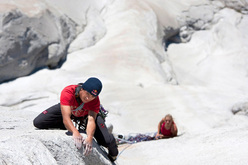 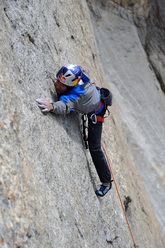 Interview with David Lama prior to his expedition to Cerro Torre, Patagonia together with Daniel Steuerer. The two Austrians have an important objective: to attempt the first free ascent of the famous Compressor Route.

What does David Lama, the super sports climbing champion, have to do with Cerro Torre? This is the question we asked ourselves a few days ago when we found out about his imminent departure for Patagonia. To tell the truth, we sholdn't have been too startled: in recent years the European Bouldering and Difficulty Champion has surprised us on numerous occasions, with difficult multi-pitches in the Alps and trips to Yosemite, Chile and, this summer, even Kyrgyzstan. His evolution from indoor competitions to big alpine faces is become clearer and clearer still and, if you stop to think about it, it comes as no great surprise therefore that Lama's latest project is nothing less than a first-less challenge. Beautiful, fascinating, difficult... Together with his friend Daniel Steuerer he will invest three months in attempting to free the Compressor Route on Cerro Torre. Neither the mountain nor the route need an introduction, nor does the infamous Patagonian weather. Suffice to say is that this is an incredible challenge, one that no one has ever succeeded in doing and that Lama and Steuerer will give it their very best to achieve.

David, in a short while you'll get a close encounter with Cerro Torre... how do you feel just before departure?

The last few weeks have been fairly stressful. I've travelled a lot due to competitions, the final meetings for the Cerro Torre expedition and a series of other obligations. Now though everything has been planned, gear packed and sent and I can hardly wait for it all to begin. Even if the unknown, that what awaits me there, worries me considerably

Tell us about who you'll be climbing with and how the idea for this project came about?
My climbing partner is Daniel Steuerer. He used to be one of my biggest opponents in the Europa Cup. He stopped taking part in competitions due to an elbow injury, but this didn't stop his love for climbing - he concentrated on alpine undertakings. In 2006 we travelled to Yosemite Valley together, this kindled my love for big faces and since then we've had numerous adventures together. We did a lot together last winter in particular and we also developed the idea about our Cerro Torre project, which was first given to me by Hansjörg Auer.

What do you hope to achieve?
The aim of our expedition is the first free ascent of the Compressor route on Cerro Torre. We'll attempt a line on the SE Ridge and orientate ourselves along the Compressor Route. This seems to be the most logical line for a free ascent, even if the crux pitches are located right at the top, on the headwall.

Why did you chose Cerro Torre and why in particular the Compressor Route? We're sure you know the history of this mountain and route well...
If you analyse the expedition from an external point of view you might believe that I'm only interested in a free ascent. But I see our adventure as something more complete, a bigger whole. I'm after all the experiences and impressions that await me and the history of the mountain and this route are part of all this. Cerro Torre and the disputed first ascent form a unique legend, without parallels in the mountaineering world. Some important alpinists have already attempted to free climb the Compressor route on Cerro Torre, yet up till now no one has achieved a continuous free ascent. This interest me a lot, Cerro Torre is regarded by many alpinists as the hardest mountain in the world.

What do you expect from Patagonia? And Cerro Torre?
Last year I went on a small expedition to NW Patagonia, in Cochamó valley. The countryside is significantly different from that in the Torre region, but there are nevertheless some similarities... Weather will be a deciding factor: the storms are the main problem and for a free ascent we need at least 2 continuous days of good weather. On the first day icefall tends to make things too dangerous, on the second we could dare to make an attempt...

We know you above all as an athlete (and champion) from the sports climbing scene. But we also know that in recent years your vertical horizons have developed considerably: you've done numerous difficult multi-pitches in the Alps and Yosemite, been on expeditions in Chile and this summer in Kyrgyzstan. Does this mean you're transforming into an alpinist? Or simply that you're trying to combine being an athlete and alpinist? If so, how is this possible?
Parallel to my competitions I've always been a very keen rock climber. I've never dreamt about climbing on plastic only and over the last couple of years I've become increasingly interested in alpine terrain. Nowadays there are many people who climb 8c, 9a is repeated almost every week. But the number of those who can climb can run it out far from their last pro, at 1000m above sea level and with difficulties in the French 8th grade, is relatively small.
With regards to the combination expeditions & competitions, I have to say that sadly I noticed that these are two very different worlds, hard to combine. Expeditions cost an enormous amount of energy which is then missing in a competition. I really like the many different aspects of climbing. In the near future I'll certainly dedicate time to competitions, after that though you'll find me more on alpine faces than indoors.

What will play a fundamental role in Patagonia and the Torre?
Weather is the most important factor. Apart from this, the teamwork between myself and Daniel will prove decisive. We'll be together for more than three months. That's a n unusually long time and tension is practically part of the program - even if Daniel is one of my best friends!

You'll be there with a photographer, a camerman will make a film. We know you didn't want too much media hype before setting off... hasn't all this created even more pressure?
The outcome of this undertaking is connected to so many different factors that neither Daniel nor I can influence. What was important for us was to be able to follow our aims completely independently from the rest of the crew. Both the cameraman and the photograph have experience in the mountains, nevertheless they'll be supported by two mountain guides. Daniel and I have the objective set clearly in our minds; any pressure we feel therefore will come from within.

Before wishing you good luck: what do you hope to gleam from this adventure?
I know that I'll experience lots of new things. Not everyone has the chance to do something like this and I see this as a great opportunity...