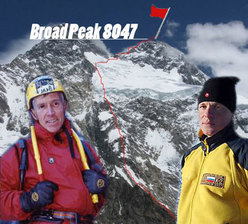 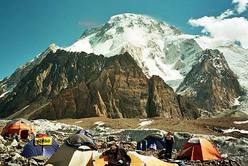 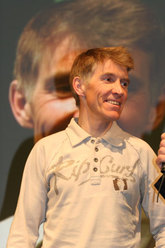 On 17/07/2008 the Russians Valery Babanov and Victor Afanasiev reached the summit of Broad Peak (8047m) after having climbed a new route up the northwest face of the 12th highest mountain in the world.

The news circulated rather subdued, but in reality this is probably one of the most important ascents of this Himalayan season. On 17 July the Russians Valery Babanov and Victor Afanasiev reached the summit of Broad Peak via a new route up the northwest face. To date Babanov's official website has little information about the climb, and more information has come from the Italians Daniele Nardi and Mario Panzeri, currently engaged on the mountains normal route after having climbed Nanga Parbat in June.

Nardi published the following  on his site "the two Russian reached the summit on 17 July at 20.00 after having spent 9 days on the wall, climbing through the storm while all other expeditions returned to their basecamps. They continued undeterred up their new route which they had studied carefully for weeks beforehand from basecamp." For the record, on 17 July Broad Peak was summited by the Russians Valery Shamalo and Pavel Chochia, by Elizabeth Revol from France, Martin Ramos from Spain and Joao Garcia from Portugal, all via the normal route.
At present we have no greater details, but what is certain is that this climb is another important ascent to add to the curriculum of young Victor Afanasiev and Babanov.  The latter is one of the world's most important alpinists in the world - last year his new route up Jannu received international recognition with the St. Vincent Award - both in terms of his climbs and above all style (not just alpine-style).
Watch the interview with Valery Babanov carried out on 07/03/08 - WebTv TrentoFilmFestival

Valery Babanov
"As time passes you begin to understand that there are no limits. All the limits that exist are only in your mind. The choice is outs, always, and it is only this choice which defines our future." Valery Babanov
Valery Bababnov, born in 1964 in Omsk, Russia, is one of the greatest mountaineers in the world. Since starting in 1980, this small great man has consistently demonstrated his creativity and capacity in adapting to all forms of vertical terrain. He has completed more than 600 ascents, many of which extremely difficult, throughout the Alps in particular the granite Mont Blanc rock faces and on the world's highest mountains. He climbed eight +7000m peaks in the ex Soviet Union before moving on to the Himalaya and North America.
Throughout all his ascents Babanov has always proved that he believes in cutting-edge alpinism which is extremely personal, exploring new terrain via new routes and experimenting with different styles from solitary climbs to  ascents roped up with close partners. In 1995 he climbed the American Direct on the Petit Dru (Mont Blanc), in 1996 he ascended the Zodiac on El Capitan (Yosemite Valley, USA). In 1996 he soloed a new route up the north face of the Grandes Jorasses before soloing a new route up Mt. Barile in Alaska. In 2001 he soloed a beautiful line up Peak Meru (6310m) - awarded with the Piolet d'Or - while in 2006 he climbed a new route up Chomo Lonzo North (7200m), Himalaya. For his 2003 ascent of Nuptse East together with Yuiri Koshelenko he received his second Piolet d'Or, while two years later he make an important first ascent on the SW Face of Mc Kinley (6200m) in Alaska.
Babanov has always climbed on all types of terrain, from rock to ice and mixed. His latest ascent is an excellent example of this: the new route up the west Pillar of Jannu, which received international recognition by winning the first edition of the Premio St. Vincent for the best mountaineering achievement by a mountain guide.
Apart from Babanov's exceptional technical capabilities, what is striking is his vision which experiments and explores all the variables of the lightest of alpine-styles. Furthermore, Babanov's ability to catch the attention of mountaineers worldwide thanks to his cutting-edge climbs is unique. Valery Babanov is a man of few words but of deeds and of an immense passion for the mountains. This passion, or pure dedication, motivated him to become a UIAGM approved mountain guide in 2002. To date he is the only Russian mountaineer with this qualification.