► News ► Alpinism ► All or nothing. By Hector Silva Peralta
Versione italiana 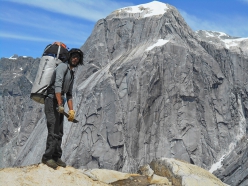 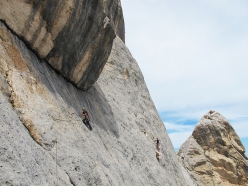 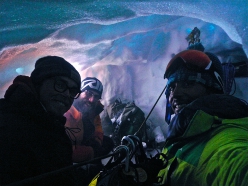 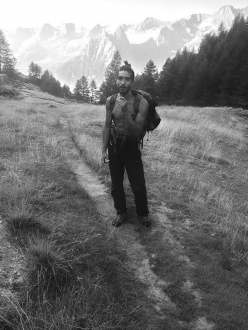 PORTFOLIO / gallery Portfolio: All or nothing. By Hector Silva Peralta

All or nothing. By Hector Silva Peralta

The first of two parts written by Hector Silva Peralta, a Chilean mountaineer who lived in Italy for 9 years before traveling to Chile, Canada and Alaska pursuing his dream: to become a mountaineer.

"I’d just exchanged security, a house that we’d just finished renovating, for a sofa here and there" writes 36-year-old  Hector Silva Peralta who following a bicycle accident "started a sort of inner journey." In his wallet he treasured photos of Cerro Torre, Marmolada, Civetta… and Denali, where a few weeks ago he repeated the famous Cassin Ridge.


I’d like to not always have to learn lessons the hard way. I was in Rome, I woke up not knowing where I was, soaking wet in my own blood and with a broken jaw. I had been going home after listening to Inti illimani , a Chilean band from the 70’s, when all of a sudden I saw a car coming straight at me at full speed. I dove out of the way just in time, landing face first onto the dirtiest street in Rome.

"What a shit place to die, I always thought I’d die in the mountains" I’ve heard my voice talking to me from afar. I began to cry, and dragged my feet one in front of the other for hours until I made it home. That was almost it. It was roommate at the time, a girl from Nepal, who saved me. She started telling me wonderful stories about the Himalayas to take me away from the pain. It worked. Her stories drove me away from my own frustrations, due not to the actual accident. She took me away from the city, towards somewhere happy where lush forests, smooth boulders and freezing rivers abounded. My time in the city was up.

I wanted to scream, "I’ve found myself". I wanted to share my moment of revelation, but I couldn’t. My mouth was wired together and I couldn’t talk to anyone for over two months. I started a sort of inner journey, I planned my escape into the Alps.

I printed small pictures, like ID photos, of Cerro Torre, Denali, the South Face of Marmolada and Civetta, and I carried them in my wallet. Every once in a while, when traveling though the city by bus, I’d pull out a picture and look at it in order to flee from the surrounding chaos. I’d gaze at the pictures like someone looking at a person they love. I enjoyed preparing every minute detail of the day we’d finally meet, face to face at last.

This relationship ruined the relationship with my girlfriend. I’d always stare at photos of the mountains, and it was hard to make plans together for the weekends. We no longer went out together on Friday night like we used to. One day she gote home late, towards 4 am while I was making coffee and packing my gear to go climbing on Gran Sasso. We had a brief, awkward conversation and I left. That day we went to the V Pillar of Intermessoli, a remote place in the mountain range, and returned at 10 pm. She was in front of the mirror, putting on her makeup. She lit a cigarette, kissed me on my cheek and left.

It was New Year’s Eve when I finally felt the full weight of my decisions. Apart from the mountains, I was on my own.

She asked me to leave, I felt hurt but finally free. The doors opened, I'd wanted to become an alpinist, that’s what I’d always desired. Be careful with your dreams. Life will give you what you ask for, but in its own manner. I wanted to climb five days a week and this was the price I’d have to pay. I threw my belongings into my bags, fast, in order to disguise the pain. Everything I owned went in two duffel bags and one ski bag.

I felt proud for being such a dirtbag, for not owning too much, for traveling light. I said to myself: "Bravo!" I had so many contradictory emotions, I’d just exchanged security, a house that we’d just finished renovating, for a sofa here and there. My decision made me feel immature, I felt like climbing was a game for youngsters and not a real job that someone my age would do. I’d just finished university, I’d become an architect and should have been part of the system. I even tried hard to be an architect, but I didn’t have the right connections to make it happen. And I didn’t want to spend all of my energy trying to fit in to a group of conceited artists, who only build things on paper and rarely deal with reality.

Alpinism seemed more real to me, connections are irrelevant here, either you climb the route or you don’t, and after reaching the summit you have to make it back down into the valley. Your surname, the degrees you’ve earned, aren’t worth shit.
Out there we measure ourselves with our own creations, we understand immediately if we can pull it off and do what we’d planned on doing. Sometimes this means not eating for days, being really cold, sleeping outside or not sleeping at all. Feeling lonely or even feeling like a failure. All of this tests your own personal resolve, that very same mental strength that will enable you to make it out there, high up on an alpine face.

I had very little money in my pocket, just enough to buy a plane ticket back to Chile or to goto the Alps and find a job. Going back to my parents house meant failure to me, I would never have become an alpinist. I had to stay, at least, I had to try. Riccardino, the coach at the San Lorenzo, climbing gym, had moved north to Arco di Trento. He was my best friend and climbing partner, he was very sorry for my break up and offered me a place to stay.

It was raining up in Arco. I walked through town and after two days I found a job. It made me feel like I was doing the right thing. My boss was "Il Tony", he was also my brother from a former part of my life. He understood me. Without even asking me, he offered me a place to stay in the warehouse, in between manikins and boxes. There was even a bathroom and a kitchen. It was all I needed.

In town there were many like me, city misfits who’d made the same choices as I had, quitting their city life to become mountain guides, work part-time in a climbing shop in order to climb full-time. I learned some tricks of the trade, saw the possible. With my friends we went climbing in the Dolomites, the Alps, the south face of Marmolada, Tre Cime di Lavaredo, Grand Capucin, the Northeast Face of Piz Badile. And when season was over, I’d go back to Patagonia and then Arco again.

One day while in Chile I received a call from Italy. Tony had died in a mountaineering accident, he’d slipped on a frozen trail. Of all of us, I never expected him the one to go first. He never did risky things, he was father of four kids, was married, with big projects. This time the mountains broke my heart, I felt betrayed . It took me a while to recover from this, to find a sense in his departure. I became clumsy with fear, I just couldn’t move as I used to. I was scared to run it out above my last piece of pro, one of us was more than enough.

Locked in my solitude I cried, screamed at the mountains with all of my strength, but heard no echo. The silence was all-engulfing, the mountains had revealed another side that I had not been aware of before. All of a sudden they turned their backs on me. I dug deep into myself and questioned why I climbed. Because life is too short to do otherwise. I shaved my hair like a punk in order to show the world outside the anger inside. I climbed without ropes, often I climbed with almost no protection. The way in which I approached alpinism changed, having accepted the consequences I suddenly felt free and empowered.

I finally came face to face those I’d carried in my wallet for years. They represent the list of projects. Some I know now, others I haven’t met yet. I could have done better, but without sponsors it wasn’t easy.

Today, eight years down the line, I’ve climbed one of the routes that’s been in waller. It represents the end, but above all I view it as the start for something new. The Cassin  Route up the South Face of Denali.