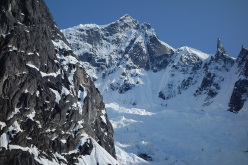 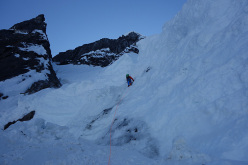 Lucifer North Face, Alaska: Doug Shepherd finding a way through one of the many crevasses we encountered. Given the warm temps and low snow pack the face was, in short, a mess and required some creative route finding and good old fashioned blue collar alpinism: post holing and avoiding crevasses.
Photo by John Frieh 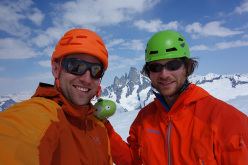 Lucifer North Face, Alaska: In 2009 I made my very first trip to AK ever with someone I had never ever met: Doug Shepherd. Six years later this was my 10th FA in Alaska: 3 of those have been with Doug (Mt Dickey "No Such Thing As a Bargain Promise" 2012, Mt Burkett "Can't Knock the Hustle" 2012, and this ascent of Lucifer "Agua Sin Gas" 2015). This was my fifth FA in SE Alaska and my 10th FA in the state of Alaska. In the background you can see the Devil's Thumb massif.
Photo by John Frieh

In May 2015 John Frieh and Doug Shepherd made the first ascent of "Agua Sin Gas" (III WI4/steep snow) up the North Face of Mount Lucifer in Alaska. The trip report by John Frieh.

If you look at a map of Alaska you'll notice a long, thin strip of land extending to the southeast. Southeast Alaska, sometimes referred to as the Alaska Panhandle, is the southeastern portion of the U.S. state of Alaska, which lies west from the northern half of the Canadian province, British Columbia. Running through this strip of land are the Coast Mountains; they are so-named because of their proximity to the sea coast.

Near the town of Petersburg, Alaska and one of the major geographic features of this part of Alaska is the Stikine Icecap, a large icefield straddled on the Alaska–British Columbia boundary. The Stikine Icecap area is home to a number of technically demanding and dangerous peaks and spires of granite that have garnered comparisons as North America's version of Patagonia. Peaks of particular renown include Devils Thumb, Witches Tits, and the Burkett Needle and have attracted many of the greats over the years including Fred Beckey, Jon Krakauer, Alex Lowe and Colin Haley. In the 1947 American Alpine Journal Beckey wrote "Although they do not rise so high as the great mountains farther to the N.W., these peaks of the Alaska-Canada Boundary are magnificent in their alpine grandeur and challenging in their technical difficulties. Here, indeed, is one of Alaska's neglected mountain regions, not without mystery."

I made my first trip to the Stikine Icecap in 2009 to make the first ascent of the west ridge of Burkett Needle. The climbing on the Needle was trumped only by the scenery; the Icecap seemed to be teeming with beautiful lines. I was amazed to learn many of them were unclimbed and as a result have more or less returned every year to attempt to climb one of them. In 2014 while approaching the West Witches Tit Jess Roskelley and I spotted on the other side of what local climbers call "The Cauldron" or "Witches Cauldron" a very attractive looking face. I took a few photos and made a mental note to keep it in mind when a conditions and weather window coincided; I didn't expect it would be the following year.

After reading that SE Alaska's snowpack was 30% of normal earlier this year I more or less assumed I wouldn't get to climb there unless a weather window appeared early in the season. In August of 2013 I had been shut down by extremely difficult glacier conditions in a low snow year and didn't want another "scenic helicopter flight" trip.

I was in Salt Lake City the Monday prior, training with some climbers at Gym Jones when I noticed a solid weather window was taking shape. I pinged the usual suspects and Doug Shepherd was available for a quick trip. In 2012 Doug and I had made the first ascent of the northwest face of Mount Burkett and Doug was eager to return to the Stikine Icecap. I flew home from Salt Lake City on Tuesday night, packed bags and drove to Seattle on Wednesday night to meet Doug and catch the early flight north to Petersburg, AK, on Thursday.

We flew into the Icecap Thursday afternoon; it was after we had been dropped off and were setting up camp that we realized I had in fact forgotten the stove in Portland. I think for most trips this would have ended the trip right there but the warm temps the high pressure was providing had turned the glacier into mush and we found a few shallow pools to collect water from. Still... no hot water meant no coffee which is an epic in my book. Doug earned a partner of the year nomination for not killing me right then and there.

Given the heat wave we opted for a 2am departure from camp in hopes of climbing a large majority of the face in the predawn hours. We found the same puddles we had collected water from the night prior unfrozen at 1 am so we knew it was going to be a sloppy snow conditions.

We managed most of the face before sunrise but we found the face slow going with numerous crevasses and sloppy snow in the unusual heat. We were hoping for a direct line up the headwall to the summit but given the temps and conditions opted for a safer, less direct line off the face climbers left of the summit.

We managed the ~4000' face in about 12 hours; though we encountered some vertical snow/snice in places found the majority of the terrain to be moderate. All in all it was a good day out. We managed to snag a pick up some day and were back in Petersburg later in the day on the 15th making for a <24 hour Petersburg to Petersburg trip.

Given my stove oversight we opted to name the route "Agua sin gas" which in Spanish means "water without gas." Though usually this is reserved for still water (i.e. not sparkling water) it happened to also hold true for our situation.