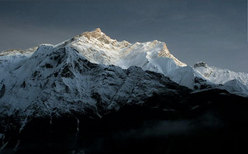 Annapurna, at 8091m, the 10th highest mountain in the world.
Photo by Marco Camandona

At 13.40 Nepalese time Italian mountain Guide Abele Blanc reached the summit of Annapurna (8091m, Nepal, Himalaya). In doing so he has now ascended all 14 8000ers, and is the third Italian to do so without supplementary oxygen.

All 14 8000ers for Abele Blanc. It happened this morning on the summit of Annapura, the last summit missing from the mountain guide's list to complete the tour which, numbers and conventions to one side, represents a true personal undertaking. A great journey, marked by courage, too. Yes because Blanc's relationship with the 8000ers is marked by passion. At times difficult and extremely painful. For instance his difficult and beautiful K2 in 2000. And in 2005, right here on Annapurna, the loss of one of his closest partners, Kristian Kuntner. Then, in 2006 on Annapurna once again, the sad return home for serious personal reasons.
These experiences could have halted any alpinist, any man, but not Abele Blanc. After Everest without supplementary oxygen last year (he returned to the summit after having climbed it with O2 in 1992) Blanc is now the thrid Italian and 11th alpinist to have climbed the fourteen highest mountains in the world without supplementary oxygen. The guide from the Valle d'Aosta achieved this at the tender age of 56, after 20 years of great adventures in the Himalaya and Greater Ranges.
True to himself as a man and alpinist of few words and with no rolling "press office", Blanc set off for Nepal in complete silence, without letting anyone in on his project. The news sickered through just a few hours ago, that of the summit. The final step, the ascent to the 8091m high summit of the Goddess of the Harvests, started at circa 01:30 local time from Camp 3 at 7200m, and Blanc ascended together with members of a Korean expedition and their Sherpa.
The way up wouldn't be easy. They had chosen a line up the North Face (to the left of the original French route used during the first ascent)  was less difficult but technically harder and with numerous question marks. The final plateau was laded with fresh snow, just liek the 200m gully which marks the route. Furthermore, Blanc had to aim for the exit on the col between the Main summit and Annapurna I, before tackling the delicate and windy ridge which led to the summit, together with the other Korean alpinists and their Sherpa. The summit was reached at 13.40 Nepalese time, 11 hours after leaving Camp 3. The alpinists have now descended to Camp 3 where they will spend the night before navigating through the difficult seracs which lead to Base Camp at circa 4000m.
While waiting for the return to Base Camp, it is difficult to comprehend what might be crossing through Abele Blanc's mind. How many memories will surface, and which? How many images of his long journey will he be reliving? One thing is certain, as Marco Camandona, his friend on many adventures, told us: "Abele deserves it. He achieved this difficult journey alone, though his desire, his comittment and immense determination." Yes, Abele Blanc really deserves it: his is a journey which has gone well beyond the 14 eightthousanders, is one which is all about experiences and life itself.