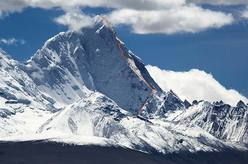 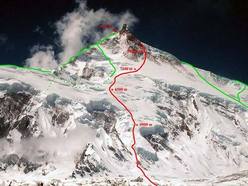 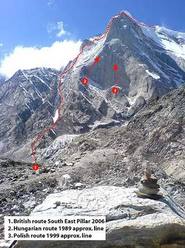 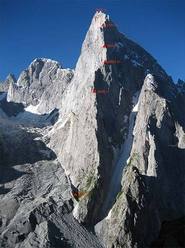 On Friday 16 January 2007 the five teams nominated for the award will present their ascent to the public and the (desired and prestigious) golden ice axe will be awarded to the "ascent of the year".

It's Oscar time for the mountaineering world. The date set for the 16th Piolet d'Or, organised and promoted as usual by Montagnes Magazine, is this Friday 26 January at Grenoble. In a special evening's ceremony the five teams nominated for the award will present their ascent to the public and the (desired and prestigious) golden ice axe will be awarded to the "ascent of the year".

This year, in line with the last couple of editions, all nominations are for lightweight or extremely lightweight first ascents. Once again the limelight is on "alpine style" and exploration or, put in other words, the style of ascent which many consider to be the purest. Furthermore, all 5 nominations are for Himalayan ascents.

The international jury is comprised Yuri Koshelenko from Russia (President of the Jury and winner of the Piolet d'or 2003 together with ValÃ©ry Babanov for their ascent of Nuptse), Michel Piola from Switzerland, Steve House and Vince Anderson from America (winners of the Piolet d'Or 2005 for their ascent of Nanga Parbat), Christian Trommsdorff from France (nominated for the Piolet 2005). Furthermore, Im Duck Yong (founder of the Asian Piolet d'or), Vinicio Stefanello (PlanetMountain.com) and the editors of the French Montagnes Magazine. This year, just like for the last two editions, the Group d'Haute Montagne (Ghm) will not be a member of the jury. Apart from the Piolet d'Or, there will also be the Spectators Choice voted by the crowd.

Good Piolet to all!


THE CANDIDATES FOR THE 16th PIOLET D'OR
Marko Prezelj and Boris Lorencic (Slovenia) for their new route up the W Pillar of Chomolari (7326 mt - Tibet)
Therse two Slovenian guides carried out a first ascent of a magnificent line on the Tibetan Face of Chomo Lari, a stupendous mountain which had been attempted four times only since the f.a. in 1937. Apart from the technical difficulties, Marko had to make use of his great Himalayan experience to find the best route and choose the best ascent tactics. The two mountaineers were accompanied by 4 compatriots who, at the same time, made the f.a. of an ice line to the left of the pillar.
Route length: 1950m
Number of days spent on the mountain: 4 days ascent, 2 descent from 13 to 18 October 2006
Grade: VI, mixed M6

Ian Parnell and Tim Emmett (GB) for their new route up the SE Pillar of Kedarnath Dome (6830 m) India. Previous to the British ascent, the vast E Face contained two previous lines which did not however reach the summit. These had been attempted by two important expeditions, a Hungarian in 1989 and a Polish in 1999 which vast means at their disposal. Ian Parnell and Tim Emmett reached the summit in alpine stile with little gear, climbing past multiple rock sections via a logical line up the SE Pillar. Tim Emmett is one of Britain's best "extreme" rock climbers. According to Emmett, on-sighting the crux 6c at 6000m was one of his best achievements to date.
Route length: 2.000m
Numer of days spent on the route: 7 days ascent, 2 descent from 1 - 9 October 2006
Grade: engagement VI 6c expo, mixed M3

Denis Urubko and Sergey Samoilov (Kazakshstan) have been nominated for their new route up the NE Face of Manaslu (8163 metri) Nepal
After last year's impressive ascent, when the duo climbed a new route alpine style on the S Face of Broad Peak (8047m), Denis Urubko and Serguey Samoilov, the two Kazak mountaineers made an integral first ascent on the complex S Face of Broad Peak: the start is characterised by numerous crevassed slopes which lead to a mixed bastion at more than 7000m. The duo received the Piolet d'Or Asia for this ascent on 10 November in Seoul, Korea.
Route length: 3200m
Number of days spent on the mountain: 4 days ascent, 2 descent down the normal route along the N Face, from 4 - 9 May 2006
Grade: engagement VI, rock 6Â°, ice and mixed 70Â°

Igor Chaplinsky, Andrei Rodiontsev and Orest Verbitsky (Ukraine) have been nominated for the new route up the N Face of Shingu Charpa (5600m) Pakistan
This team from the Ukraine managed an ascent of the line which had been eyed by many mountaineers who had visited Pakistan's Karakorum, despite poor means at their disposal. A few days later the Americans Kelly Cordes and Josh Wharton repeated the route confirming the both the difficulties and the beauty of the challenge.
Route length: 1550m
Number of days spent on the mountain: 5 days ascent, 2 descent down the same route, July 2006
Grade: engagement VI, rock 7Â°+, mixed M5 close to the summit

Pavle Kozjek (Slovenia) has been nominated for his solo ascent of the SE Face of Cho Oyu (8201m, Nepal) in less than 15 hours. This was the only solo ascent of an 8000m peak this year. 47 year old Pavel is the only Himalayan mountaqineer to have achieved a similar feat from base camp to the summit in just one day. Pavel was followed by a companion at the start of the route, then proceeded alone and reached the summit one day ahead of schedule.
Route length: 2000m
Number of days spent on the mountain: on 2 October 2006, scent to summit then descent to Camp 2 along the normal route on the W Face, to 7000m.
Grade: engagement VI, rock 4+ at 7200 m, snow and ice 60Â°