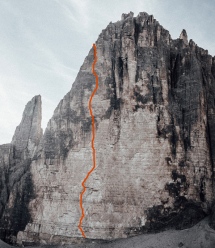 The ideal starting points are Cortina d'Ampezzo and Auronzo. These can be reached from the north via the Pusteria Valley, or from the south by first taking the motorway (A27) to Longarone and then following the state road northwards. Both points of departure lead to Misurina, from where a private toll-road winds steeply almost to the base of the Tre Cime's south faces. Park the car at Rifugio Auronzo, situated at the end of the road and either sleep here or in Rifugio Lavaredo, reached by following the path for 15 minutes underneath the majestic South Faces which contain, amongst many other famous routes, the Spigolo Giallo.

Approach the route by following the path from the rifugio di Lavaredo to the Forcella Lavaredo. Continue on a small track which traverses left underneath the base of the North Faces. The route starts on the left-hand side of the face, circa 10m right of Via Camillotto Pellesier.

Via the normal route on the South Face. Walk along a large ledge to the cairns that mark the normal route. Abseil down the chimney using two 50m ropes and continue by downclimbing until the scree below is reached. Follow the cairn markers leftwards, until a short abseil leads close to a saddle. Reach the saddle (Southeast Face) and steep, east facing gully; this can abseiled or downclimbed (UIAA 2). The final leap can be avoided by traversing leftwards along the ledge and reaching the gully that separates the Cima Grande from the Cima Piccola.