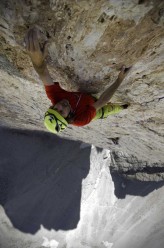 Great route first ascended by Christoph Hainz and Kurt Astner in August 2009, then freed by the duo in July 2010. The route follows an obvious and exposed line to the left of the Spigolo Scoiattoli arête and offers, according to Hainz, "climbing similar to "Alpenliebe" and "Phantom" and just as exciting".

The ideal starting points are Cortina d'Ampezzo and Auronzo.
These can be reached from the north via the Pusteria Valley, or from the south by first taking the motorway (A27) to Longarone and then following the state road northwards. Both points of departure lead to Misurina, from where a private toll-road winds steeply almost to the base of the Tre Cime's south faces. Park the car at Rifugio Auronzo, situated at the end of the road and either sleep here or in Rifugio Lavaredo, reached by following the path for 15 minutes underneath the majestic South Faces which contain, amongst many other famous routes, the Spigolo Giallo.

From Rifugio Auronzo take path no.105 to Col di Mezzo and continue to the North Face. Follow the track across the scree to the base of the arête and start to the right, close to some scree ramps.

COMMENTS for the route "Pressknödel"

No comments found for Pressknödel 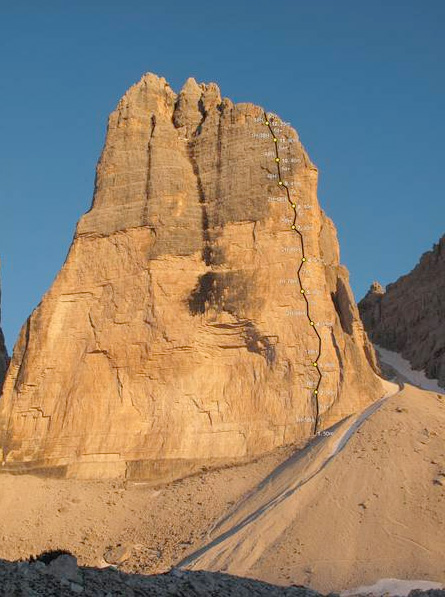