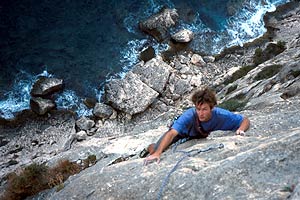 This sea cliff is characterised by sharp, reddish limestone, fragile in places. Routes are well-bolted, the climbing technical and, since they are abseiled into, the only way is up…

From Cala Gonone follow the sign "Cartoe/Osalla". At the first hairpin bend continue straight up the cement road which soon levels out and turns into a dirt track. Follow this for over 2km to the first cairn which marks the start of Oceano Mare. Apriti Cielo is marked over 1.5km further on, as is L'Alchemista. The abseils are marked with a spot of black paint.

Wild camping is strictly prohibited in the National Park, but the municipal campsite in Cala Gonone is prohibitively expensive! Rooms or apartments can easily be found by asking around - expect to pay between 15-20 euro/head.There are small supermarkets in Cala Gonone and Baunei, while to the north of Olbia there is an enormous out-of-town shopping mall.

Getting to Sardinia
By plane: fly to Cagliari, Olbia or Alghero and then hire a car.

By car: take one of the numerous ferries from Genova, Livorno, Rome or Naples to Olbia. From Olbia take the highways SS125 and SS131 southwards towards Nuoro. Exit before Nuoro following signs to Dorgali. Shortly after this town a signposted road leads left through a tunnel down to Cala Gonone (approx. 100km, 1.5 hrs).
Baunei is reached via the winding SS125 from Dorgagli in about an hour (50km).

Autumn or spring. September is particularly good since the sea is beautifully warm and the island relatively free of tourists. Summer is unbearably hot and winter can often be too cold and windy.