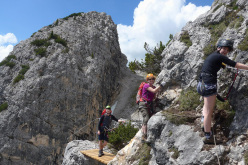 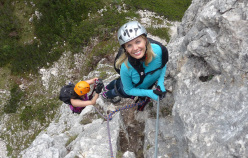 Ra Bujela - Via ferrata Maria e Andrea Ferrari. The new via ferrata above Cortina in the Dolomites.
Photo by Enrico Maioni

To the delight of all via ferrata lovers, the Cortina Mountain Guides have recently equipped a new ferrata up Ra Bujela, the northernmost of the two rocky towers in the Tofana group. The chairlift that leads from the Duca Aosta hut to the Pomedes hut passes in between these two towers and while Ra Bujela means needle in the local Cortina dialect, the other tower is called Ra Pegna, meaning churn.

This new ferrata is called "Via ferrata Maria e Andrea Ferrari", and enables you to reach the top of Ra Bujela with the help of steel cables, two bridges and some pins that facilitate the ascent where this gets steeper.

The first part of the ferrata is definitely the most demanding and there are some very exposed sections up excellent rock. The difficulties ease considerably when you reach the first bridge, and when you reach the second bridge the route mainly follows the ridge up broken rocks: the poor quality of the rock at this point doesn’t affect the safety of the ascent and it is along this stretch that you can enjoy the magnificent panorama onto the Dolomites.

The proximity of the Duca d'Aosta and Pomedes huts, the beautiful view, the ease of access and the time needed to explore this relatively short via ferrata up Ra Bujela (2257m) all make this new ferrata well worth doing. Furthermore, it can be joined to other spectacular ferrate nearby, such as via ferrata Olivieri on Punta Anna, the sentiero ferrato Olivieri and sentiero ferrato Astaldi.

Mass will be held at the end of July to bless the ferrata and those who explore it.