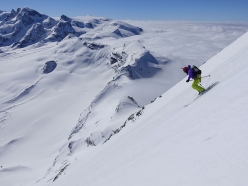 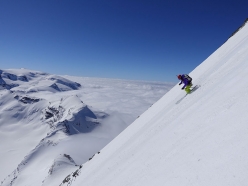 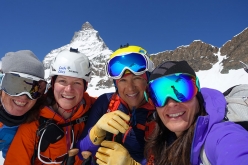 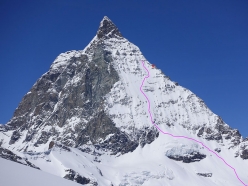 The line of descent taken by Giulia Monego, Liv Sansoz, Lorraine Huber and Melissa Presslaber down the East Face of the Matterhorn
Photo by archivio G. Monego

Matterhorn East Face ski descent: in the right place at the right time

Giulia Monego, Liv Sansoz, Lorraine Huber and Melissa Presslaber and their ski descent down the East Face of the Matterhorn. Giulia Monego reports.

It’s been a while since I last wrote about my ski descents and the emotions I’ve felt up in the mountains, regardless of whether they’re positive or negative, but I realise that putting pen to paper is a great way to truly savor these experiences and share them with others. I don’t like emphasizing what I get up to on skis, nor do I like playing things down. Most of the time I simply experience things, nothing more, in silence. They’re intense moments that become etched in my mind. I make them my own and I also guard them jealously. But this time I’ve felt I wanted to share my latest beautiful day up in the mountains, on the Matterhorn.

For years the East Face of the Matterhorn has played in my mind, it’s been a goal one day I’ve wanted to achieve. I’ve always been attracted to this face because of its beauty, its aleatory nature, for the fact that the line is located on such a majestical peak. The curious thing about this face is that it quickly changes appearance, depending on your vantage point. Head on it resembles a vertical face, absolutely impossible to ski down, but from a thousand different angles you can make out its potential and just as many tiny subtleties.

Due to it facing east, and being located on the watershed between Switzerland and Italy at an altitude of 4478m, this face receives all the good and bad that winter and spring can throw at it. Sometimes the wall is plastered white, other times it's pitch black, without a patch of snow just a few days later.

In actual fact it’s a wall of rock, fairly "chossy" even, without any permaice so typical of many big north faces; in theory, as soon as a layer of snow settles onto the rocks, the face could come into condition. Given its steepness and its location, however, factors such as the sun’s rays, sudden snowfall and strong winds often cause the snow to transform rapidly, and since conditions change from one hour to the next, this is by all accounts a difficult face to ski down.

I studied it for years through my binoculars and on photos, searching for my ideal line, the safest and most attractive, but whenever I wanted to give it a go there was always something that wasn’t quite right. I’ve never wanted to force things, only to find myself in the wrong place at the wrong time, in a dangerous and uncool situation. I realised, however, that the right moment had finally come when I found myself ascending the face at 5 in the morning, carefully timing the steps I was taking with the ice axes driving into the snow, breathing in deeply.

For a few minutes I couldn’t hear anyone around me, it was if I was completely alone, immersed within that imposing wall. I felt inexplicably at ease, a sensation I’d rarely felt before. The dawn light rendered everything absolutely magical. There was no wind, the temperatures were ideal, as the sun rose it painted the wall in hues of pink and orange, all the way from the summit down to me, in just a few minutes. I witnessed this spectacle in disbelief. And tried to savor every moment in all its beauty.

Right there, like never before, I felt in the right place at the right time. When the friend Roberto had mentioned a few weeks earlier that the Matterhorn was in good condition I was overcome by a mad desire to ski, but I hadn’t worn ski boots for over a month. I’d taken some time off due to an injury, nothing serious, apart from the fact that it was very painful, had trouble healing and consequently prevented me from doing anything in the mountains. After several different types of treatments, finally the latest chemical concoction I reluctantly swallowed every day seemed to work. I began to savor the road to recovery. Instinctively, as the pain soothed, my motivation and desire to ski grew, so much so I convinced myself that, yes, I’d be back in action soon.

I knew snow conditions in the Alps had been exceptional this April, and May would have provided the chance to ski a long list of dream descents. All too often in the past I’d missed out on these unique opportunities. This time I didn’t want to waste my chance, but I knew full-well that after a month of no skiing, and with little other training to speak of, I’d have to ascend 1200m vertical meters, then make my first curves down the East Face of the Matterhorn, circa 45° steep, and deal with whatever snow conditions there happened to be. Although all this worried me somewhat, the descent motivated me to the point of going… I had to at least give it a go. I had a mad desire to be up there, on that mountain.

A couple of days earlier I’d been in touch with my French friend Liv Sansoz, the famous climber and cutting-edge all-round athlete who lives in Chamonix and with whom I’d planned to ski in the Mont Blanc massif. Instead, I suggested the Matterhorn descent. She was a bit hesitant at first, but then gave me the thumbs-up. Liv isn’t an "extreme skier" but I reckon she’s extreme enough to deal with any challenges the mountains can throw at her. I trusted her. And the East Face, despite being a demanding and exposed descent, isn’t excessively steep and if the snow is in good condition, it is decidedly skiable.

At precisely the same time two of my Austrian "freerider" friends were staying in Chamonix for a fortnight: Lorraine Huber and Melissa Presslaber, with whom I shot the film ""As we are" back in 2010. Although we hadn't done many steep ski descents together, I knew about their experience and motivation. They too were super enthusiastic about the Matterhorn idea and so in just a few hours we managed to put together a team of 4 women and one excellent plan.

We set off from Chamonix towards Zermatt, the weather was good, but we all knew that the unknowns still lay ahead of us. But everything went like clockwork. Conditions seemed good, we easily reached the bivy, we rested and prepared for the ascent the next morning. We were psyched and a close-knit team; all the ingredients for a great success.

I don’t think any of us were used to doing this sort of things in the mountains with other women only, and I think that’s why we all accepted our responsibilities, working well together, acting with mutual respect and resourcefulness, to adapt to this new situation. I did feel slightly responsible as the idea had been mine, and so I felt like I was the technical leader. I was perhaps the skier who had the most experience on that sort of terrain. What's more, I knew the Matterhorn best due to my previous three ascents and, without hesitation or pressure, I started to break trail willingly, sharing this work load with Liv on many sections of the ascent.

Halfway up the face I felt inexplicably on form, and even my foot didn’t hurt me. Furthermore, I realised that the snow wasn’t too bad, neither too icy nor too wintery, a strange mix that would pose no particular problems during the descent. I was getting more and more excited by the idea that we would all manage to ski the East Face of the Matterhorn!

After a failed attempt at ascending the central gully that I’d hoped to ski down from as high as possible, we were forced to opt for the more classic line opposite the Solvay hut. Too many rocks poking out from underneath and some hidden below a sprinkling of snow would have made my line "not too ideal", so we acted safe and chose the open and more predictable slope.

Once we reached our highpoint (or, if you wish, the start), I anchored myself to a rock and started looking at the snow-covered slope below us to carefully evaluate the conditions. I didn’t feel 100% confident about my abilities that day. I hadn’t made any curves for a long time, "Will I still be able to do it up here?" Liv had the same doubts, but we broke the tension with a couple of jokes and some laughter.

When we were all ready, the timing was perfect. I put on my skis and all of a sudden my vision totally changed. As the edges bit into the snow I entered into my own, I became the skier that I am and everything seemed completely normal. Everything was under control, just as it should have been, as it’s been a thousand times before. I felt comfortable, focused and, fueled by a bit of adrenaline, I pressed REC on my GoPro and started skiing. After I made the first turns the others followed and the feeling we had was pure joy.

I was really happy, happy to be there, happy to ski that long-awaited face at last, especially happy to share the excitement with partners who were just as psyched as me, and happy to see them so enthusiastic! I’ll remember a day like this up in the mountains for a long time yet, and it’s sparked the desire that will take me, I hope, to immediately seek out other adventures and other goals.

Having had the honour of sharing an experience of this magnitude with friends, rendered this adventure even more real and sincere. Less marked by the "macho" spirit that in general characterises men, which I have to say I’ve become accustomed to. Everything was more simple and genuine, but with just the same level of excitement and adrenaline. A beautiful success because it was shared in this manner, that reminded me once again what the rewards are I search for in life and what I need to do to find them.

Thanks girls, thanks Matterhorn!