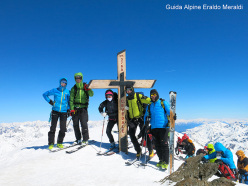 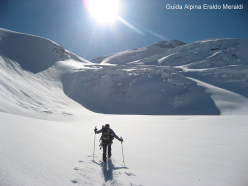 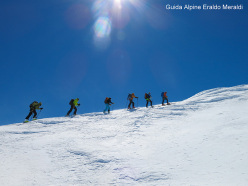 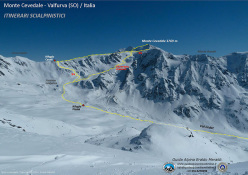 The ascent to the summit of Mount Cevedale (3769m), Ortles - Cevedale group
Photo by Eraldo Meraldi

It is nice to remember that the 1st ascent of the NE summit (Zufallspitze) was made by Edmund von Mojsisovics and Sebastian Janiger on 13 August 1864; ascending from Solda they crossed the Cevedale pass and then climbed the NW Face and SW Ridge. I often wonder why they didn't bear right to reach the closer main summit, perhaps this was due to bad weather or maybe they thought the highest point was the summit on the left. Mount Cevedale's first ascent was carried out a year later, on 7 September by Julius Payer, Johann Pinggera and Josef Reinstadler who followed the original line to the ridge that connects the two peaks before continuing up the final section via the NE ridge. The 1st ascent on skis was carried out in the winter of 1901-02 by Pietro Crosti and friends, or possibly even by Georg Lowenback alone on 4 November 1901.

The origin of the mountain's name is unclear but the most likely explanation seems to be linked to the Valfurva side of the mountain where, to the west, lies Val Cede whose name is reminiscent of Cevedale. As early as 1605 the valley's meadows were known as "Alpe of Ceveda". In German Cevedale is known as Zufallspitze, but it is customary nowadays that the higher peak to the west is referred to as Monte Cevedale (3769m), while the lower summit to the NW is called Zufallspitze 3757m.

A beautiful wooden cross is now located on the mountain's summit; time and weather weakened the original one until it fell. The summit remained bare for several decades until, on 22 September 2012, a new one was placed to mark the highest point. This important goal was achieved by a tight-knit group of youngsters who are still tied to the traditions of these valleys. Bonds like these transform mountains into places of spiritual concentration and also, inevitably, places where one feels closer to the essence of our creation.

It is said that the mountains unite; on summit one can still clearly make out the ruins of a wooden hut that testifies the numerous artillery positions placed up here during the 1st World War (1915-18) and scattered along all the mountains in the area. Man's arrogance and absurd inability to live in peace and harmony led to these tragic situations in the past, but even today humanity continues down this wrong path instead of joining forces for a common good. The mountains are silent witnesses to these follies and should make us stop and think about whether it is worth continuing in this direction. Sometimes when the summit is crowded, in both spring and summer, I get the feeling as if I'm in a bustling city, where everyone can see but no one looks, few words and exchanged with other parties and everyone is up there for themselves. The good fortune we have of being able to meet different cultures on the top of a mountain should act as a stimulus for mutual enrichment.

The view from the summit of Monte Cevedale is one of the most beautiful and widest in the entire massif, a true natural spectacle where the immensely deep sky touches even the most hidden corners of ones mind. During those fleeting moments alone on the summit I've sometimes traced the outline of the mountains on the distant horizon to create an imaginary circle. It pulses like an electrocardiogram; the energy of the mountains, their beauty and nature's gifts enrich our memories and wealth of experience that, locked tightly within in soul, participate in the meaning and the magic of life.